LOS ANGELES - Los Angeles Police Department Chief Michel Moore requested reappointment for a second term, writing in a letter to the Board of Police Commissioners that there remains "more work to be done" and he has a "strong desire" to continue to leading the department.

Moore, a 40-year veteran of the department, has served as chief since 2018 when he was appointed by former Mayor Eric Garcetti. His current term ends in June 2023.

In a statement, Commission President William Briggs said he was pleased that Moore was seeking reappointment. The commission will take up Moore's request in closed session, with an opportunity for public comment prior to a decision. Police chiefs can serve a maximum of two five-year terms. 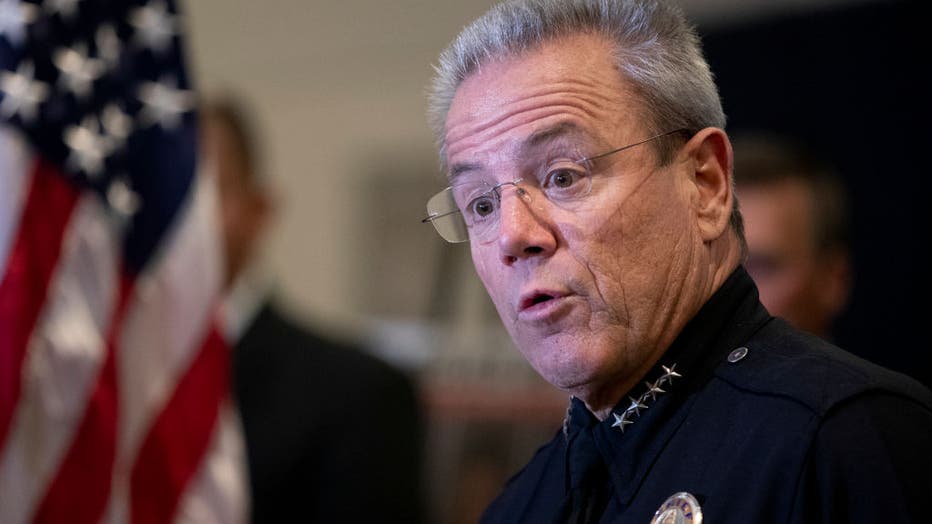 "Chief Moore is an outstanding law enforcement executive who is recognized nationally for his expertise," Briggs said.

Briggs added that Moore has guided the department through "unprecedented times." Moore, in his letter submitted to the commission Monday, cited a "historic pandemic, severe staffing reductions, a resurgence of homicides and gun related crimes, and civil unrest."

Mayor Karen Bass, who took office a few weeks ago, has the power to appoint the chief of police. She released a statement saying, "I have been notified of Chief Moore's request for reappointment. He and I will meet soon to discuss his request and my vision to keep Angelenos safe in every neighborhood."

In his letter, Moore cited a desire to address "significant departures of senior staff members" and to improve diversity in senior leadership positions. He also sought to restore "depleted staffing levels" as Los Angeles prepares to host the World Cup and Olympics in the coming years.

"No matter the challenges, our purposeful focus of deepening our community engagement, acknowledging our shortfalls, and expanding our partnerships have shown real results," Moore said.

A California Community Poll conducted a few weeks ago found that LAPD received a 55% favorability assessment, with 33% having an unfavorable opinion of the department.

Another survey, conducted by Loyola Marymount University, on police and community relations released in September had mixed results.

Trust in the LAPD increased by seven percentage points from 2020. Fifty-eight percent of respondents said they would trust the department to do what is right "just about always" or "most of the time," compared to 51% in 2020. That figure was below the level of trust in non-police alternatives (63%), but higher than trust in city government (47%) and the media (38%).

Just 16% of respondents were "very satisfied" with the LAPD's performance, with half of those surveyed answering they were "somewhat satisfied." The remaining third were either "not very satisfied" or "not at all satisfied." Two-thirds of Angelenos believed that the LAPD racially profiles Black people at a higher rate than other groups.

The percentage of respondents who described their experiences with LAPD officers as "mostly positive" also dropped from 47% to 41% over the last two years.

Moore joined the Los Angeles Police Department in 1981. He was promoted to captain in 1998. His assignments included assuming command at Rampart Area following the arrest of Rafael Perez and during the 2000 Democratic National Convention.