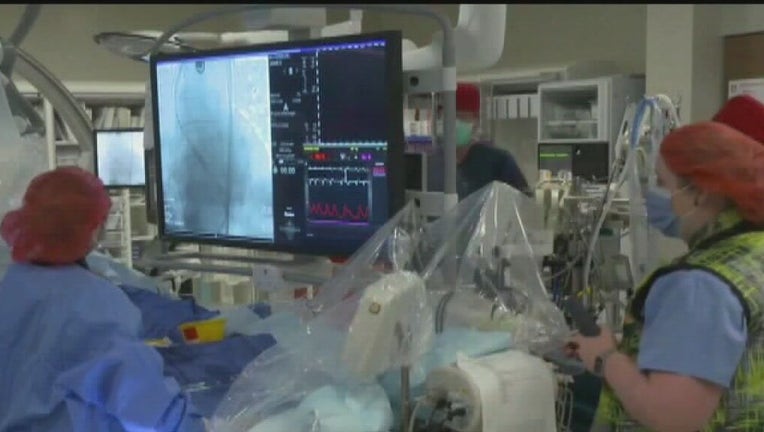 LOS ANGELES - Los Angeles County marked its 12th consecutive day of one thousand or more new COVID-19 infections Tuesday, while also noting a slight uptick in infections occurring among staff and residents of skilled nursing facilities, despite the relatively high rate of vaccinations in such settings.

Los Angeles County marked its 12th consecutive day of one thousand or more new COVID-19 infections Tuesday, while also noting a slight uptick in infections occurring among staff and residents of skilled nursing facilities, despite the relatively high rate of vaccinations in such settings.

The county reported another 1,821 new COVID cases on Tuesday and five more deaths. According to state figures, there were 585 people hospitalized in Los Angeles County due to COVID-19 as of Tuesday, up from 544 on Monday. There were 134 people in intensive care, up from 121 on Monday.

The hospitalization numbers have been slowly but steadily climbing for several weeks. The numbers are still well below the roughly 8,000 people who were hospitalized due to COVID-19 during the winter surge of cases. The current number, however, is more than double the 218 hospitalizations reported on June 15, when COVID restrictions were largely lifted statewide.

The average daily rate of people testing positive for the virus also continued rising, reaching 4.8% as of Tuesday, up from 4.1% on Monday and more than double the 2% rate from two weeks ago. The positivity rate was 0.4% on June 15.

In recent weeks, the county Department of Public Health has repeatedly pointed to dwindling case numbers at skilled nursing facilities -- which have a roughly 85% vaccination rate -- as examples of the effectiveness of vaccines.

On Tuesday, however, the county noted a slight uptick at nursing facilities, with 25 new cases confirmed during the week that ended July 11 – three among residents and 22 among staff. The nursing facilities had been averaging about 16 new cases per week. County health officials attributed the increase "in part" to so-called "breakthrough" infections of fully vaccinated people.

Health officials have conceded the presence of such infections, but the rates are extremely low. As of July 13, the county has recorded 4,122 "breakthrough" infections from among nearly 4.8 million fully vaccinated residents, an infection rate of 0.09%.

"Most of the illness and death experienced among L.A. County residents from COVID-19 is preventable because of the vaccines current availability," county Public Health Director Barbara Ferrer said in a statement. "And while the vaccines are not perfect at preventing all infections and illness, they continue to offer a powerful tool for reducing transmission.

"Adding masking for everyone indoors provides an additional layer of protection to counter the very infectious Delta variant," she added. "And while it is disappointing that we are again witnessing a surge in cases, compliance with the new mask directive and increasing vaccination rates provide us with strategies for getting back to low rates of transmission."

The mandate means customers are again required to mask up when entering any indoor public establishment, including retail shops, grocery stores, restaurants and workplaces. Indoor dining remains open, but customers must remain masked while they are not eating or drinking.

The city of Long Beach, which has its own health department, announced last week it would also impose the mask-wearing requirement. Pasadena, another city with its own health agency, followed suit Monday night, and will formalize the requirement in the coming days.

Health officials continue to blame the current surge in infections to the highly contagious "Delta" variant of the virus preying on the unvaccinated population. There are nearly 4 million county residents who have not been vaccinated, including 1.3 million children who are ineligible for the shots.

The most recent figures from the county show that 69% of residents age 16 and over have received at least one dose of vaccine, while 61% are fully vaccinated. Black and Latino residents continue to lag behind the rest of the population when it comes to vaccinations, particularly among younger residents.

In hopes of encouraging more people to get vaccinated, the county is continuing to offer incentives. Through Thursday, anyone who gets vaccinated at sites operated by the county, the city of Los Angeles or St. John's Well Child and Family Center will be entered for a chance to win one of seven concert ticket packages, with tickets to see the Harlem Globetrotters, Disney on Ice and the Gold Over America Tour with Simone Biles at Staples Center.