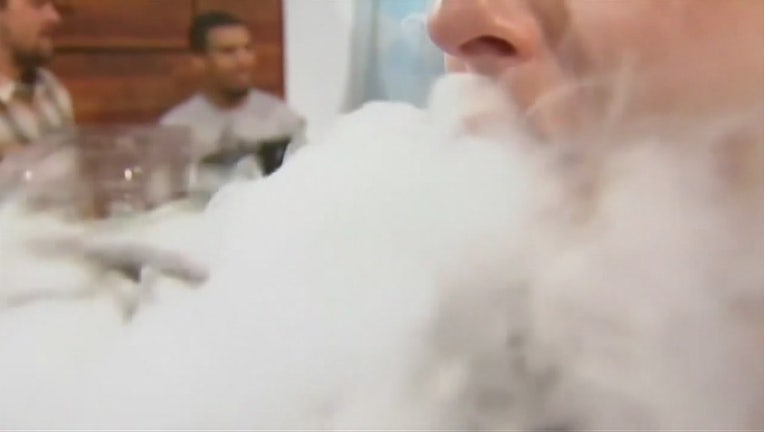 LOS ANGELES - The Los Angeles County Board of Supervisors Tuesday unanimously voted its intent to approve a ban on flavored tobacco products, including menthol, despite protests by dozens of tobacco business owners and advocates who support vaping and e-cigarettes as aids to quitting smoking.

The Los Angeles County Board of Supervisors Tuesday unanimously voted its intent to approve a ban on flavored tobacco products, including menthol, despite protests by dozens of tobacco business owners and advocates who support vaping and e-cigarettes as aids to quitting smoking.

Groups from both sides of the issue tried to shout each other down while awaiting entry to the downtown Kenneth Hahn Hall of Administration. Those against the ban -- which would apply only to retailers in unincorporated areas of the county -- carried signs reading "I Vape, I Vote,'' while many proponents wore black T-shirts identifying themselves as "United Families and Parents.''

Supervisor Janice Hahn, who chairs the board, repeatedly warned the audience to respect other speakers and threatened more than once to clear the board room in the wake of shouts and cheers. More than 300 people signed up to speak on the issue.

"As you can tell, there's a lot of passion around this issue,'' Hahn told the crowd.

The ordinance needs to come back to the board for a second reading, as early as next week, and would take effect 30 days after that second vote. Tobacco retailers would then have 180 days, under an amendment proposed by Supervisor Mark Ridley-Thomas, to obtain new licenses required under the ordinance and to clear their shelves of flavored tobacco products.

Online sales would not be prohibited and users would not be punished under the ordinance, according to Judy Whitehurst, senior assistant county counsel.

Department of Public Health Director Barbara Ferrer told the board
that flavored tobacco products "are driving the current vaping epidemic among youth'' and encouraging experimentation that can lead to lifelong addiction.

"Evidence is mounting that vaping can severely impact lung function,'' Ferrer said, pointing to nine recent vaping deaths nationwide -- including one in Los Angeles County -- and decisions by the U.S. Food and Drug Administration and surgeon general to declare youth use an epidemic.

One pod of a popular vaping product has as much nicotine as a entire pack of regular cigarettes and nicotine can affect brain development up until the age of 25, according to Ferrer.

"Kids are lured in by the flavors and they are locked in by the nicotine,'' said Annie Tegen of the Campaign for Tobacco-Free Kids. "But dozens of vaping advocates said flavored products had helped them quit pack a-day smoking habits and improved their health.

"People who smoked for 30 or 40 years were able to break free,'' George Baida told the board.

"Please do not restrict flavors. This is helping adults quit,'' Brandon Minkler said.

"I'm addicted to not smelling like an ashtray and living a longer, healthier life,'' another man said.

Others warned that they would lose their jobs to the ban and worried aloud how they would support their families.

"(It's) a horrible idea to ban this,'' said A Kouture, founder of the
International Black Restaurant & Hospitality Association.

Kouture pointed out that government didn't ban McDonald's over worries about children's health or prohibit flavored alcohol over concerns about teen drinking and warned that the ban would fuel a black market.

Business owners said they had no interest in selling to kids and pointed out that minors are violating the law when they use e-cigarettes and vaping products. Opponents to the ban urged the board to focus on enforcing existing laws or take aim against youth use with more targeted measures.

"This is our livelihood, this is all we know,'' Farid Zahreddine told
the board. "We've been selling this product for 10 years ... please protect the kids and protect us.''

However, Ferrer said a compliance check of 280 shops showed that one in four were selling to underage consumers.

Several schoolchildren spoke in favor of the ban.

"Our classmates are getting so addicted that they are hitting their JUULs in the classroom at class time,'' student Lisa Lu said. "We hope that L.A. can stand up against big tobacco."

Business owners pushed back against that characterization.

"We are not big tobacco, we are small business,'' said Chris Wheeler of Savage Enterprises, warning the board that the flavor ban would amount to "handing big tobacco a win.''

Each side took potshots against the other. KFI-AM radio host Wendy Walsh accused opponents of being "tobacco industry foot soldiers,'' while one business owner said he saw kids being coached on what to say outside the boardroom.

Many speakers asked the board to make a cultural exemption for hookah use, which they argued was also far too cumbersome to be popular among kids.

But Ferrer said that 2% of high schoolers and 4% of young adults surveyed by her department used hookahs in the prior month. She emphasized that the ordinance wouldn't ban the use of hookahs, only the use of flavors.

"What we're asking for is to ban the sale of flavors that mask the harshness of tobacco products,'' Ferrer said.

Supervisor Kathryn Barger said she believed that roughly 700 businesses in unincorporated areas would be affected by the ordinance and noted a lot of confusion around what the ordinance did and didn't cover. She asked staffers to develop a fact sheet for businesses.

If ultimately passed, the ordinance would require a new county business license for tobacco and e-cigarette retailers that carries an initial fee of $778 and an additional $142 fee every two years after that. Businesses would also be required to maintain a tobacco retail license  - expanded to apply to stores that only sell electronic cigarettes or vaping products -- that costs $235 per year.

The county debate came on the same day the state Department of Public Health issued a health advisory urging everyone to refrain from vaping until investigations in vaping-related hospitalizations and deaths could be completed.

To date, some 90 Californians with a history of vaping have been hospitalized for severe breathing problems and lung damage. Two of those people have died.

Though a specific cause has not yet been identified, the state agency warned that anyone inhaling a foreign substance puts themselves at risk and that vaping may lead to serious illness and death.

"Vaping is not just a concern for youth; the vaping cases under investigation affect youth and adults alike,'' Acting State Public Health Officer Dr. Charity Dean said in a statement.

Officials urged anyone with difficulty breathing after vaping to contact a doctor immediately. They also asked affected users not to discard used vaping cartridges, to allow state labs to analyze the remaining substance.