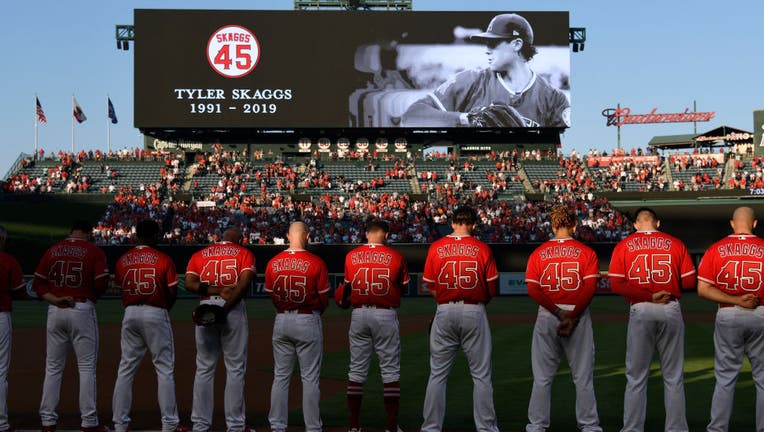 The Los Angeles Angels of Anaheim stand for a moment of silence before they play the Seattle Mariners. The entire Angels team wore #45 on their jersey to honor Skaggs who died on July 1. (Photo by John McCoy/Getty Images) (Getty Images)

FULLERTON, Calif. (AP) - A California judge is allowing a lawsuit to proceed against the Los Angeles Angels over the drug-related death of pitcher Tyler Skaggs.

Orange County Superior Court Judge Glenn Salter on Monday rejected the team’s motion to dismiss and set the start of a 20-day jury trial for Oct. 2, 2023.

Skaggs, 27, was found dead on July 1, 2019, in a hotel room in the Dallas suburb of Southlake on the same day that the Angels were supposed to open a four-game road trip against the Texas Rangers.

A coroner’s report said Skaggs choked to death on his vomit and that a toxic mix of alcohol, fentanyl and oxycodone was in his system.

Last month, Eric Kay, a former Angels public relations employee, was sentenced in Texas to 22 years in federal prison after being convicted of conspiracy and distributing the drugs that led to Skaggs’ death.

The trial included testimony from five major league players who said they received oxycodone pills from Kay at various times from 2017-19, the years he was accused of obtaining pills and giving them to players at Angel Stadium.

Skaggs’ widow, Carli Skaggs, sued the Angels for wrongful death and negligent hiring and supervision, alleging that team officials knew Kay was distributing drugs to players but promoted him and allowed him continued access to them.

The Angels have denied the accusation, but the judge rejected a request from the team to dismiss the suit, saying, "There are enough factual allegations" to proceed to trial.

Two lawsuits were filed, one in Texas on behalf of Skaggs’ parents and one in California for his widow. The Angels this year agreed to allow the parents to join the California suit, and the Texas case is expected to be withdrawn.