KPCC reporter arrested by LASD during protest after Compton shooting

The Inspector General is expected to discuss the incident at the Sheriff’s Civilian Oversight Commission meeting on Thursday, September 17.

Huang, a KPCC/LAist reporter was arrested Saturday night while she was covering a protest following the ambush shooting of two LASD deputies in Compton. 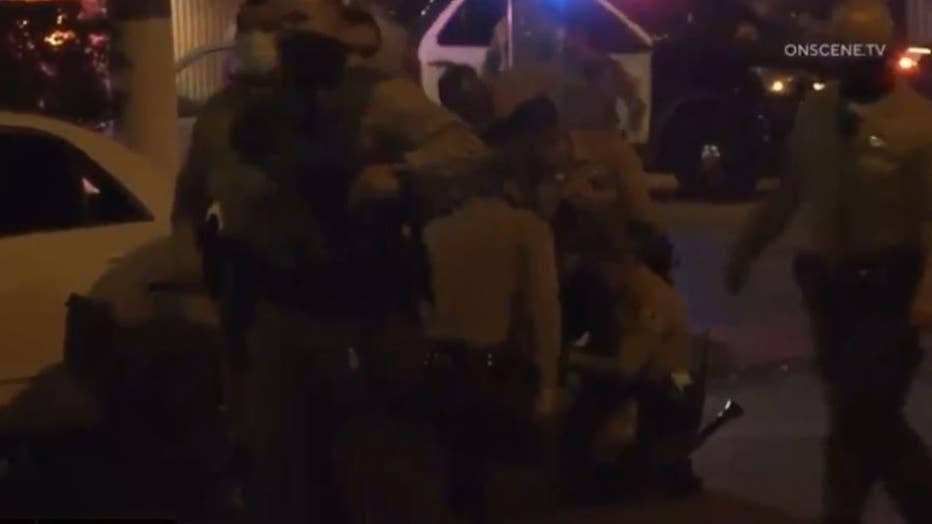 Huang, who was wearing a lanyard with her press credential hanging from her neck, recorded the encounter as she was thrown to the ground by deputies, LAist/KPCC reported.

Video from Huang's cell phone has since surfaced, appearing to contradict the department's description of events. KPCC reported that the video shows Huang repeatedly identifying herself as a reporter, shouting "KPCC," and saying, "You're hurting me" and crying out in apparent pain.

The department initially refused to provide KPCC with details of what happened, but later, Navarro told the station that deputies took Huang into custody on suspicion of obstruction of justice for "interfering with a lawful arrest."

Huang said she was trying to document the arrest of a protester, an account in line with her video from the scene.

Navarro also claimed Huang "didn't have proper credentials," but she was visibly wearing press credentials around her neck.

Sheriff Alex Villanueva later said that Huang got "right up on the shoulder" of a deputy trying to make an arrest, and saying her actions were more "activism" than journalism.

KPCC, which was seeking an apology from the department, issued this official statement:

"We offer condolences to the two sheriff deputies who were shot Saturday evening. These are challenging and stressful times for everyone, but Josie Huang was arrested while doing her job. The charges should be dropped. Her arrest is the latest in a series of troubling interactions between our reporters and some local law enforcement officers. Journalists provide an essential service, providing fair, accurate and timely journalism and without them, our democracy is at risk."

A statement from the Society of Professional Journalists strongly condemned the arrest and called for the charges to be dropped.

The statement noted, "This is at least the second time that a journalist of color from this news organization was mistreated and injured while reporting on civil protests."

The controversial sequence of events occurred outside St. Francis Medical Center in Lynwood, where the two ambushed deputies were being treated for gunshot wounds.

Villanueva called the shooting cowardly, said it pisses him off, and that the wounded deputies radioed for help after the shooting. He says they have both undergone surgery.

A tweet from the sheriff's department at 2:19 a.m. Sunday includes the now-documented false claim that Huang did not identify herself as a journalist.

In a span of less than one minute, Huang told deputies on at least five occasions that she was a reporter and KPCC staffer, as evidenced by the recording.

She was taken to the women's jail at the Century Regional Detention Center and released about 4 a.m. without bail but cited for an obstruction charge.

A KPCC newsroom executive said Huang had visible bruises and scrapes, a sore shoulder and a blackened eye.

LAist has also called for an apology from the department.

After her release, Huang sent out a slew of tweets regarding her incarceration.

"Last night I was arrested and charged with obstructing a peace officer by @LASDHQ after videotaping their interactions with protesters in Lynwood.

This is what I remember and what I have on video and audio," Huang tweeted.

"After the press conference, I went to my car in the hospital garage and was tying things up on the phone with 1 of my editors. It was almost 11 pm. Then I heard loud shouting outside the garage, so I went to check things out. I had on a lanyard around my neck with a press ID. A handful of men were on the sidewalk.

A couple were carrying large flags. Others were filming deputies and taunting them. One deputy pointed a weapon at the protesters. I started filming on my phone, standing off to the side. No one took issue with me being there.

"I texted video to editors. When I looked up from my phone, the small group of men had dispersed & deputies were following at least 1 man down the street. I walked behind, using the zoom on my camera so I could keep physical distance. A couple of deputies looked at me as I filmed," she continued.

"I saw a commotion ahead of me. Deputies rushed one man and chased another. I was filming an arrest when suddenly deputies shout "Back up."Within seconds, I was getting shoved around. There was nowhere to back up.

Somehow I was able to start a new video right away. You see my phone clatter to the ground and I start shouting "I'm a reporter. I'm with KPCC." I scream for help from the TV reporters I know are around the corner doing their 11 p.m.live hits.

"After my phone drops, it keeps recording and it captures two deputies damaging my phone by kicking and stepping on it. I can hear myself in the background shouting, 'You guys are hurting me' and 'Stop it.' I was put in the back of a patrol car -- the start of some 5 hours in LASD custody that began with the deputy refusing to uncuff me so I could put my face covering back on, telling me I just had a 'scrape' when I was bleeding from my foot and not giving me back a shoe," she tweeted.