Punta Ventana, located in the town of Guayanilla, was shaped like an arch offering a beautiful view of the ocean.

The natural wonder, located along Puerto Rico’s southern coast in the town of Guayanilla, was shaped like an arch offering a picturesque view of the ocean.

On Monday, Yordán told the newspaper, “it finally fell.” 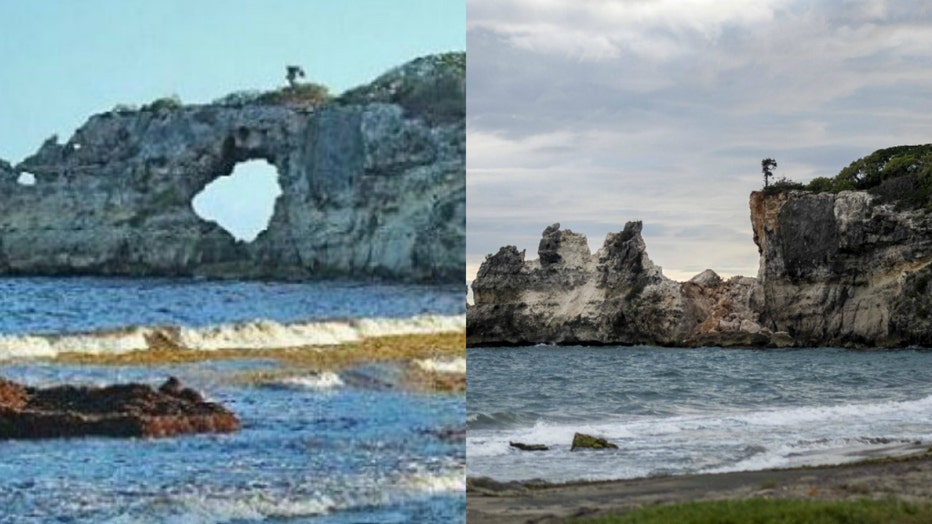 Punta Ventana, or Window Point, is pictured in a 2015 file image next to a photo of the site following the earthquake. (Photo by RICARDO ARDUENGO/AFP via Getty Images)

Denniza Colon, a 22-year-old resident of Guayanilla, told the Miami Herald that she went by the area after the quake and was shocked to find the arch had vanished. Colon said she had visited Punta Ventana frequently as a child.

“This is really sad,” she told the newspaper. “It was one of the biggest tourism draws of Guayanilla.”

“Today our icon remains in the memory of all,” according to a Spanish translation.

The quake, which struck at at 6:32 a.m. local time, unleashed small landslides — causing power outages and severely cracking some homes. It was one of the strongest quakes yet to hit the U.S. territory that has been shaking for the past week.

There were no immediate reports of casualties.

The quake was followed by a string of smaller temblors, including another quake measured at magnitude 5 that struck later Monday, at 10:51 a.m., shaking power lines and frightening residents of southern Puerto Rico who had been waiting outside their homes due to fears the buildings were damaged and unstable.

The first quake hit just south of the island at a relatively shallow depth of 10 kilometers (6 miles), according to the U.S. Geological Service. There was no tsunami threat, officials said.