A woman had a simple tattoo done to remember a favorite place, but got the coordinates wrong and instead pinpointed a random spot in the Pacific Ocean.

A St. Louis woman who was trying to get a spontaneous tattoo of a meaningful location ended up getting the coordinates of a random location tattooed on her body because she did not double-check her conversions.

Instead of getting the coordinates for downtown Sedona, Arizona, Bri Pritchett, 24, accidentally ended up getting coordinates of a random spot somewhere in the Pacific Ocean off the coast of Chile permanently tattooed on her shoulder.

Pritchett and her boyfriend took a trip to Sedona to celebrate getting their COVID-19 vaccines in early April. Pritchett went to school at Northern Arizona University in Flagstaff and used to frequent the downtown Sedona area with her college friends. 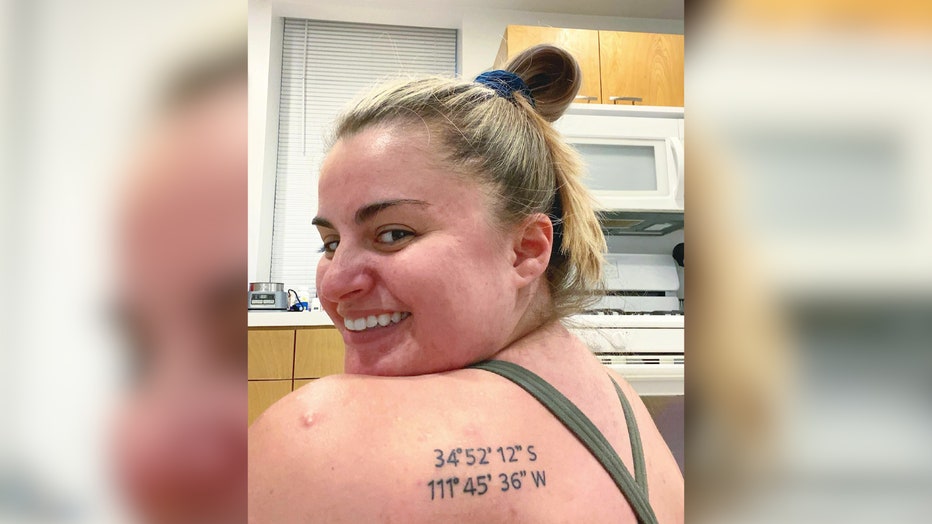 Bri Pritchett showing off her new and incorrect tattoo. (KSAZ)

RELATED: Hundreds brawl in Nebraska field over the name Josh

"I love Sedona. Loved it," Pritchett told FOX TV Stations. "I went on hikes near there to have a little break. Sororities and fraternities hung out at a local creek. It was a meaningful place for me and got me through some tough times in college."

During the tail end of her trip, Pritchett decided she wanted to commemorate her love for her past college town and get the coordinates of downtown Sedona tattooed on her left shoulder.

"So, I was standing in Sedona and looking around the downtown area, and I dropped a pin in Google maps," Pritchett said. "My boyfriend and I had talked about it the whole trip and decided to just walk in."

Little did she know, she had made a minor mistake that actually made a huge difference in the meaning of her new ink.

Pritchett realized that something was off about her tattoo while at work where she is a sensory analyst for Anheuser-Busch.

"It was about a week after I got it," Pritchett said. "I was learning things at work about the regions that hops grow in and I saw a map that said this is where they grow and they had the latitude posted and I realized Arizona was not anywhere near where I got tattooed. I was like, I have to re-Google this, so I was sitting at work and I’m banging my head against a desk because I felt so stupid."

"I was so close," Pritchett said, laughing.

She originally wanted to keep the mistake a secret, but little did she know, her younger sister had seen her tattoo on Instagram stories and immediately Googled the coordinates just to double-check Pritchett’s conversion.

"She knew before I did and she didn’t even tell me," Pritchett said, laughing out loud. And after sharing the news with her friends in a group chat, they convinced Pritchett that the story was too good not to share.

Pritchett holds no ill will against her sister for not sharing. In fact, she thinks the whole story is funny.

"Figuring it out on my own was fun," Pritchett continued. "The first hour I was like, oh my gosh I can’t believe I messed that up so royally."

While replacing the "S" for an "N" in her tattoo could be a fairly fast fix, Pritchett has decided to keep it.

"I mean, it’s whatever," Pritchett said. "I think I’m just going to keep it. It’ll be a good story."