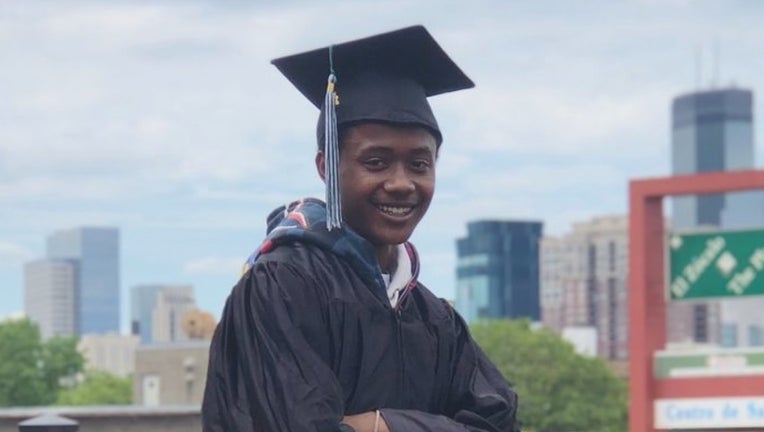 Oliver Perkins III was shot and killed in Minneapolis.

MINNEAPOLIS (FOX 9) - A heartbroken mother returned to the scene of a shooting in Minneapolis that claimed the life of her 18-year-old son, Oliver Perkins III, earlier this week.

“It just doesn’t make any sense. I am so hurt,” said Charlie Jones-Burge, Oliver’s mother.

Mother was on phone with son during deadly Minneapolis shooting

A heartbroken mother returned to the scene of a shooting in Minneapolis that claimed the life of her 18-year-old son, Oliver Perkins III, earlier this week.

Jones-Burge described losing a child as a pain like no other.

Her 18-year-old son Oliver Perkins III had overcome so much. He battled a lifelong sickle cell condition and persevered through homelessness to graduate from high school.

Over the summer, the YMCA’s Youth and Family Services singled him out in a social media post, celebrating all that he had accomplished and all that was on his horizon.

On Wednesday night, his life was snatched - gunned down near a corner store at East 19th Street and Nicollet Avenue just south of downtown Minneapolis.

“For him to go out like this, it’s just so hard to fathom,” said Jones-Burge.

Jones-Burge was on the phone with her son on Wednesday, calling her on her birthday, when gunfire erupted.”

“I heard the gunshots,” she said. “We were talking. Pop, pop, pop, pop. I kept saying Oliver, Oliver. I called him back and he didn’t answer. I got over here as fast as I could.”

She raced to the corner only to find her son, who was shot multiple times, getting loaded on an ambulance. Family told FOX 9 he died at the hospital a day later.

Thursday night, friends and loved ones gathered at the site for a vigil and memorial balloon launch.

In a year of deadly violence on the streets of Minneapolis, Jones-Burge promises her young son will not just be another statistic.

“I didn’t realize how big an impact he was to a lot of his friends,” she said.