A former Provo mayor who has served in Congress since 2017, Curtis says Republicans can push for serious climate solutions while holding fast to conservative values. To prove the point, he has formed the Conservative Climate Caucus, an all-GOP group aimed at educating fellow Republicans on climate change and advancing market-based policies to counter the Green New Deal and other Democratic proposals.

"Those who watch this caucus will see Republicans do care about this Earth — deeply,'' Curtis said at a news conference Wednesday.

"We, too, want to leave this Earth better than we found it. We don’t need to kill the U.S. economy to reach our climate goals. In fact, it’s just the opposite. There is a way to lower emissions without sacrificing American jobs and principles. And I believe Republicans are the ones to lead on this.''

Leading Republicans, most notably former President Donald Trump, have mocked climate change as a hoax and downplayed the effects of warming temperatures caused by fossil fuel emissions. Trump withdrew the United States from the global Paris climate accord, and his Environmental Protection Agency refused to update a website highlighting evidence of climate change in the United States, including rising temperatures, increased ocean acidity and more severe droughts and wildfires.

Helen Mountford, the vice president for climate and economics at the World Resources Institute, discusses the Paris Agreement, an accord that President Biden rejoined.

Rep. Peter Meijer of Michigan, another caucus member, said it's long past time for Republicans to acknowledge the reality of climate change and put forward solutions that reduce carbon emissions while remaining "aligned with our business community.''

Climate caucus members "are not going to be bringing snowballs onto the House floor,'' Meijer said. "We’re bringing solutions. We’re not using this as a cheap talking point.''

Meijer was referring to a 2015 incident when Sen. Jim Inhofe, R-Okla., brought a snowball to the Senate floor to dispute global warming.

Meijer, a freshman who voted to impeach Trump in January, acknowledged that Republicans have an image problem on climate change, but he said Democrats must answer for excesses of their own.

"Far too often,'' he said, "our colleagues on the other side of the aisle look at the environment as a cloak they can wrap around any policy, as just another adjective in front of a nebulously defined justice that can encompass whatever their talking points want.''

Curtis, who voted against impeachment but supported a bipartisan commission on the Jan. 6 Capitol insurrection, said he has not talked to Trump about the climate caucus. The group includes some strong Trump supporters, but all are "independent thinkers,'' Curtis said in an interview.

Calling climate change a serious threat, he said, "We've been missing from the table for too long as conservatives.'' 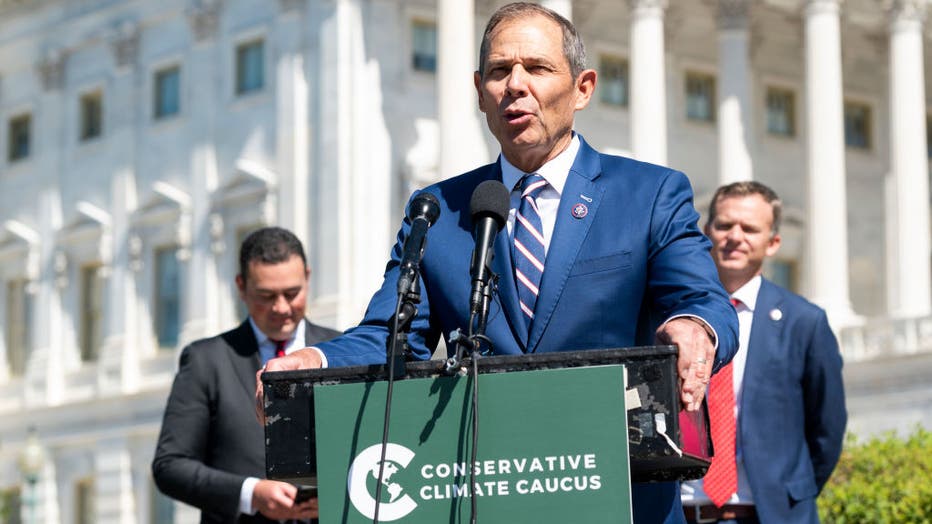 None of the top three GOP leaders in the House belongs to the climate group, although House Minority Leader Kevin McCarthy of California has pledged to form a GOP task force on energy and climate issues.

Rep. Kathy Castor of Florida, the Democratic chair of the full House climate panel, said she hopes Republicans are serious about addressing climate change and are not just trying to score political points.

"As a dangerous heatwave threatens to break all-time temperature records across the West, and as families and farmers struggle with rising costs, it is clearer than ever that Congress must act now to expand clean energy and cost-saving energy efficiency,'' Castor said. "There is no more time for half measures. If my Republicans colleagues really want to do something, they need to start voting in favor of real solutions."

David Doniger, a top climate strategist at the Natural Resources Defense Council, said his organization welcomes Republican engagement on climate. "The key question is: Will they support actual limits on carbon pollution to cut emissions in half in the next 10 years and reach net-zero (greenhouse gas emissions) by 2050?" he said.