Tupac Mosley, 17, whose father died last year, earned more than 40 scholarships worth over $3 million after having been homeless for some time during high school.

MEMPHIS, Tenn. - A high school valedictorian whose father died last year earned more than 40 scholarships worth over $3 million, after also having been homeless throughout some of his time in high school.

Tupac Mosley, 17, graduated Sunday from Raleigh Egypt High School, after achieving a 4.3 GPA. He was also accepted to more than 40 schools.

But life wasn't always easy for Mosley, who lost his father.

"He has definitely impacted my emotions, as it's hard for me to focus," Mosley said. "But I didn't let it ultimately defeat me or stop me from being successful as far as my academics." 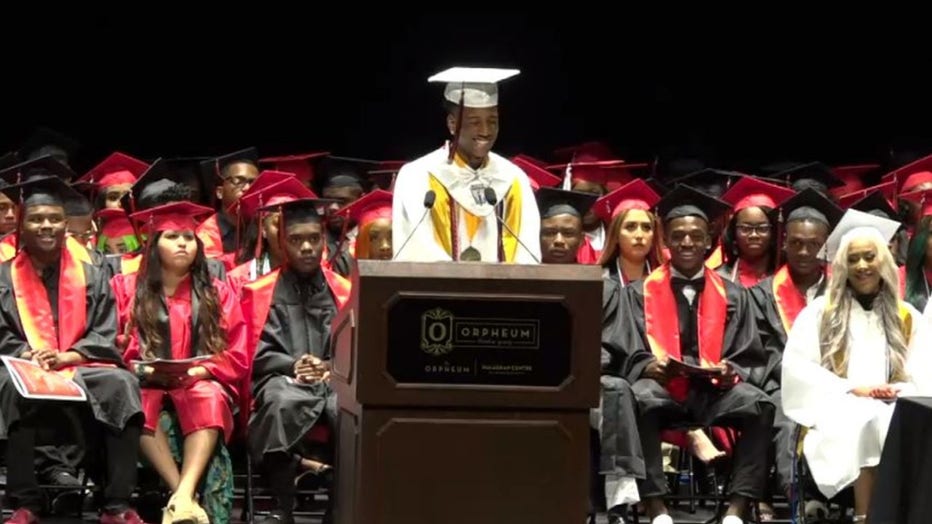 After his father passed, his family fell behind on bills and ended up getting evicted from their home Feb. 21 of this year, Mosley told Fox 13 Memphis.

"So, we went to different homes so far and we were blessed to have For the Kingdom," he told the station.

He and his family had lived for the last month and half at a cabin at For the Kingdom Camp. The non-profit organization seeks to inspire and impact inner-city youth with the gospel. The camp's executive director, Torrey Bates, took Mosley in, the organization said.

"I believe that Tupac is an exceptional young man who's resilience is an example to all of us," Bates said. "Poverty can befall many of us at any moment the way we handle it is determined by the resilience and the determination that comes from within."

Mosley moved out Monday and is now living in permanent housing.

Mosley told Fox 13 Memphis that if it wasn't for the director allowing him and his family to stay there, college may have not been an option.

"Tupac is a very gracious and intelligent young man that has walked among us with so much humility," Bates said.

The experience of having been homeless also "made me realize how low life can get for some people, and for myself," Mosley said.

"It just made me realize how important community and support is for individuals who come from an area like ours," he said.

The teen will be attending Tennessee State University in the fall and plans to major in electrical engineering.

"It makes me feel like I triumphed over the odds and all the adversity that I was faced with, and it doesn't deter me from being successful," Mosley said.

Mosley is very excited for his future at TSU, as it a historically black college and university, he said.

During his graduation speech on Sunday, he thanked his principal and teachers for believing in him, Fox 13 reported.

"I knew that I had to make them proud. I knew that their investment was worth it that and just show them that - yes, everything that you poured into me was worth $3 million and counting," Mosley said, according to the station. "Never let your current situation, whatever circumstances you're going through, be a mountain that you can't climb."