HONOLULU - Hawaii officials are moving to permanently dismantle a famed stairway hike, often dubbed the "Stairway to Heaven," that draws thousands of visitors each year despite the trail being off-limits.

The Haiku Stairs spans more than 3,000 steps along the Ko'olau mountain range in Oahu, Hawaii. It was originally built in 1942 by contractors for the U.S. Navy for a top-secret radio station used to transmit signals to Navy ships across the Pacific.

The popular trail has been officially closed for decades, but people often trespass to bypass security measures and access the hike and its beautiful views — sometimes sustaining injuries in the process. A search on Instagram shows thousands of photos of visitors posing along the trail.

In the past, the city had considered plans to reopen the stairs, but ultimately the Honolulu City Council voted unanimously on Sept. 8 to remove them, according to the Associated Press.

"Many do not realize the city does not own the lands that lead to the stairs, and it does not own all the lands under the stairs," said Esther Kiaaina, the council member who introduced the resolution and represents the area of Oahu where the stairs are located. "After two decades, there is still no clear path forward to secure legal access." 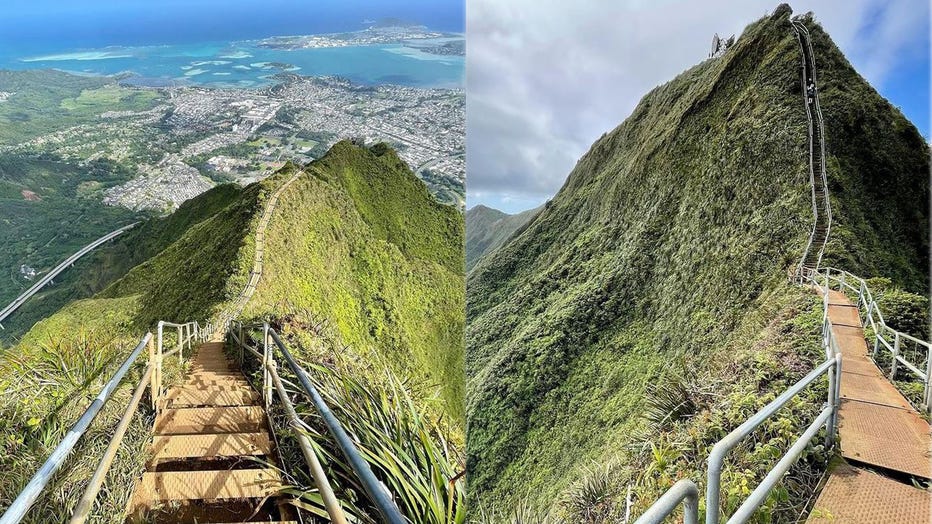 Kiaaina added the agency that oversees Native Hawaiian land does not want to grant access.

"The Department of Hawaiian Home Lands has made clear that it is uninterested in allowing a managed access program on its lands — including its lands under the stairs and its lands to access the stairs," Kiaaina said.

The trail was closed in 1987 due to safety concerns and maintenance issues. But that hasn’t stopped visitors from sneaking onto the stairs. Over a 10-day period in May, the Honolulu Police Department arrested six people and cited 93 over trespassing onto the illegal tourist attraction. Many of the arrests and citations were made in response to community complaints.

Several injuries have also been reported there over the years, including a 24-year-old who injured his knee on the trail and had to be airlifted out last April, according to local news outlet KHON-TV.

Honolulu has set aside about $1 million for the stairs’ removal. A nonprofit called Friends of the Haiku Stairs has advocated keeping the stairs but with "managed access." It called the measure to remove the trail an "unfortunate, unnecessary and expensive decision."

"It would be an incalculable loss of an incomparable recreational, educational, historic and cultural resource," Jay Silberman, a board member on Friends of the Haiku Stairs, said in a statement. "The Stairs are irreplaceable, and future generations should get to see why."

The council voted in support of a non-binding resolution that had asked Honolulu Mayor Rick Blangiardi to make the final decision, which he later approved.

"We recognize the interest the stairs have to certain community groups, however issues such as trespassing, personal injuries, invasive species and overall safety of the public cannot be ignored," Blangiardi said in a statement to KHON-TV.

"Fundamentally, it is inappropriate to have a high-use tourist attraction entering through this residential neighborhood, which lacks in the capacity to provide appropriate facilities or parking. In addition, there is no unrestricted access to the stairs and the primary landowner at the base made it clear it is not interested in providing access," he continued.

Blangiardi said as a result, his administration intends to "move forward with the necessary plans" of the stairs’ removal.