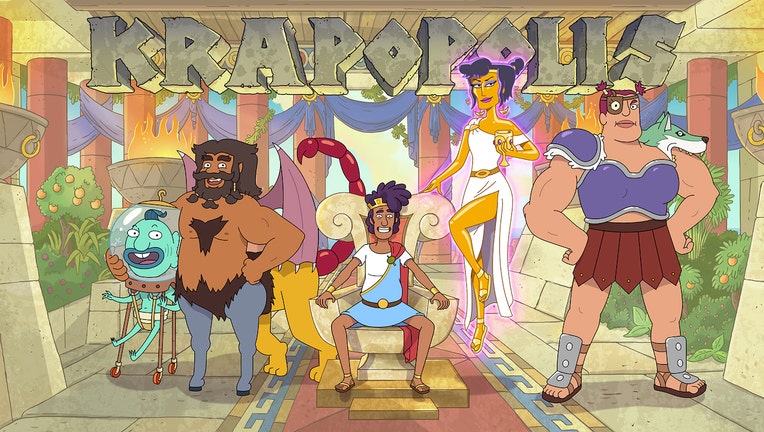 KRAPOPOLIS: A new animated comedy that centers on a flawed family of humans, gods and monsters that tries to run one of the world’s first cities without killing each other. KRAPOPOLIS is set to premiere in 2022 on FOX. L-R: Hippocampus (Duncan Trusse

Hannah Waddingham, a current Emmy nominee for the buzzy Apple TV+ comedy "Ted Lasso," will be joined by fellow funny people Richard Ayoade ("The IT Crowd"), Matt Berry ("What We Do in The Shadows"), Pam Murphy("Mapleworth Murders") and Duncan Trussell ("The Midnight Gospel").

Harmon, the creator and executive producer of the groundbreaking sitcom "Community," is also the co-creator of "Rick & Morty." Writer/producer/animator Jordan Young will serve as showrunner, under Harmon’s guiding eye.

"Krapopolis" follows "a flawed family of humans, gods and monsters that tries to run one of the world’s first cities without killing each other."

Beloved British comedian Ayoade voices Tyrannis, the mortal son of a goddess who serves as "the benevolent King of Krapopolis trying to make do in a city that lives up to its name." Waddingham, an Emmy nominee for her role as Rebecca on "Ted Lasso," plays Tyrannis’ mother Deliria, "goddess of self-destruction and questionable choices." In a family "forged in patricide and infidelity," Tyrannis is, per a press release, "the trashy one."

Berry plays Shlub, Tyrannis’ father. Shlub is "a mantitaur (half centaur [horse + human], half manticore [lion + human + scorpion])," which is quite a starting point. Berry is best known stateside for his role on FX’s critically acclaimed comedy "What We Do in the Shadows," from creators Jemaine Clement and Taika Waititi.

Murphy and Trussell voice Tyrannis’ half-sister (Deliria’s daughter by a cyclops) and half-brother (the offspring of Shlub and a mermaid) respectively.

The series will be wholly owned and financed by FOX Entertainment. Bento Box Entertainment will serve as the animation studio.

"Krapopolis" breaks ground as the first series to move forward under FOX’s broadcast direct model. But that’s not the only advancement associated with the series.

FOX also announced that "Krapopolis" will serve as "the first-ever animated series curated entirely on the Blockchain, as FOX and Bento Box enter the NFT business." Per a press release: