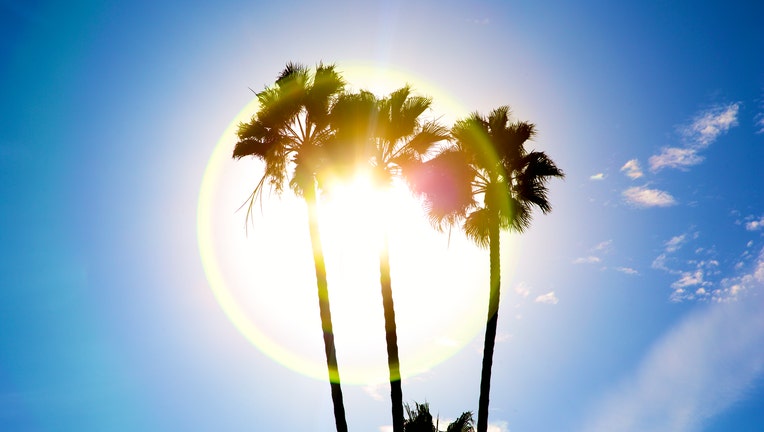 Palm trees are silhouetted against the sun in Beverly Hills, California (Photo by Michael Hurcomb/Corbis via Getty Images) (Getty Images)

HARTFORD, Conn. (AP) - Thelma Uranga is sprucing up her back deck in Chicago, hoping to host some small gatherings to take the place of the summer’s usual neighborhood festivals built on music, food and time with friends.

“People look forward to summer because winter tends to feel like an eternity,” said Uranga, 38. “We were just getting to that point where things kick off.”

Instead, she and many others are “mourning summer 2020” as cancellations pile up because of efforts to stop the spread of the coronavirus.

From Cape Cod to California, festivals are being nixed, businesses in tourist havens are looking at empty reservation books, and people who have been cooped up through a dismal spring are worrying summer will bring just more of the same.

As the weather warms, some already have begun venturing outside in larger numbers, despite guidance to stay home. Government officials say they aim to manage public health risks in a way that allows for a gradual return to normal, but with the course of the outbreak still unknown, nobody is sure what summer will bring.

On a typical summer day, the Ship Bottom Brewing beer house on New Jersey’s Long Beach Island is packed. Bartender Bridget Barlet isn’t expecting anything close to that this season.

“I’m scared even if we do open up, it just won’t be the same, especially if distancing rules are continued,” she said. “A lot of people will still be too nervous to venture back into what life as usual used to look like.”

Youth baseball leagues are holding out hope they will get in a sliver of a season, water parks are unsure if they will be able to open, and restaurants are wondering if it’s worth welcoming dine-customers when social distancing guidelines would slash the numbers they can host at one time.

Little League coach Noah Rouen, 45, of Plymouth, Minnesota, a father of four boys, is hoping there might still be time for a shortened season. After all, he said, 95% of baseball is played without anyone getting within 6 feet of anyone else.

“Those games under the lights, that’s something special for the kids,” he said.

In New Jersey, Gov. Phil Murphy has not indicated when his state’s beaches and casinos will reopen. He said Monday he hoped there would be “some semblance of normal” at the shore this summer but gave no indication when those decisions might be made.

Along Virginia’s coast, a long list of festivals have already been canceled, and the usually bustling Virginia Beach oceanfront sits quiet and empty.

The now-scrapped Something in the Water music festival, organized by musician and producer Pharrell Williams, should have wrapped up Sunday. Late May’s Patriotic Festival, which celebrates the military community, has also been called off.

Some destinations are taking measures themselves to manage the risks.

At Tony Gore’s Smoky Mountain BBQ & Grill in Sevierville, Tennessee, which opened to dine-in guests Monday, each diner faced the same infrared thermometer gun required of the employees clad in masks and gloves.

Tennessee officials, who allowed restaurants to reopen in 89 of the state’s 95 counties starting Monday, have said they are discouraging travelers from out of state and have yet to release guidelines for tourist attractions, such as Dolly Parton’s Dollywood theme park in Pigeon Forge where hundreds of furloughed employees are waiting to get back to work.

Cities and towns across the country also are sorting out what the pandemic will mean for municipal pools, beaches and summer camps.

Can the virus be spread in chlorinated pools? Will day-campers have to remain 6 feet apart while playing? New Haven, Connecticut, Mayor Justin Elicker said he and his staff are working on getting answers — but it’s not easy.

“If businesses open, then parents or guardians will have to work,” Elicker said Monday. “So, we want to be able, as much as we can, to provide opportunities for care and meaningful activities for young people. The challenge is how to do that while at the same time ensuring the safety of the young people.”

Children appear to be among the least affected by the virus, but experts warn that people of all ages can likely play a role in transmitting it. For most, the virus causes mild or moderate symptoms. For some, especially older adults and people with health problems, it can cause more severe illness and lead to death.

“This is the worst news, just devastating,” chef Linda Johnsen said. Since 2013 Johnsen has owned Filomena’s Italian Kitchen and Market in Costa Mesa, a few blocks from the fairgrounds. She estimated that her revenue jumps between 40% and 60% during the three-week exhibition.

Chuck Rage owns a hotel and a resort in Hampton, New Hampshire, and leases out several businesses on the beach. All his businesses are shuttered due to the state’s stay-at-home order, but he’s hopeful a summer season can be salvaged, even if it’s a bad one.

The one thing that isn’t missing is pent up demand, Rage said.

“I have gotten phone call after phone call,” Rage said. “All my regulars that come every year: ‘I need my Hampton Beach time. I need to come to Hampton Beach. I am sick of being in this house.’”