Charlene works at a Walmart store in Maryland and has earned a loyal following on Facebook thanks to her creative poses and always serious facial expressions.

NORTH EAST, Md. - A Walmart employee with a deadpan facial expression and seemingly great sense of humor is taking social media by storm with her creative poses around the store showcasing everything from cabbage to car tires.

Identified as Charlene, she works at a Walmart store in North East, Maryland. 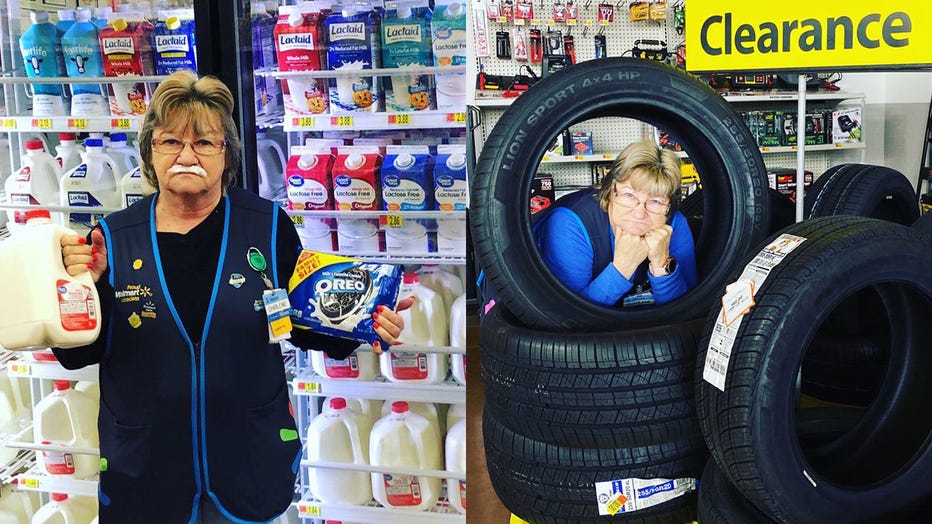 Charlene, an employee at a Walmart in North East, Maryland, poses with milk, cookies and tires. (Photo credit: Walmart)

The store’s Facebook page regularly shares photos of her modeling with various products, and no matter what she’s getting into, Charlene always keeps a straight face.

“Today is National Cabbage day! Got Cabbage? At your local North East Walmart,” one post reads, alongside an image of a stone-faced Charlene sitting in a cart filled with cabbage.

The lighthearted photos from around the store have earned Charlene a loyal following on Facebook — with some fans checking in from across the globe.

“I’m tempted to make the 18 hour drive just for cabbage that will probably wilt on the drive home. That’s how much I love Charleen,” one person wrote.

“I live in New Zealand where we don't even have Wal-mart but I love Charlene,” another commented. “Give her a raise!”

Whether she’s getting in a workout on aisle 9, or stopping to smell the low, low prices of flower bouquets, her posts garner thousands of likes and hundreds of comments.

“I feel like Charlene could easily replace one of our gone but not forgotten social media stars, Grumpy Cat. #Charleneisnewgrumpycat,” a Facebook user wrote in support.

“She needs her own calendar,” another commented on an image of Charlene lying in a crib on National Don’t Cry Over Spilled Milk Day.

A petition, which calls Charlene a “national icon for the working woman,” aims to get her on “The Ellen DeGeneres Show” and has gained nearly 10,000 signatures.

So whether it’s her apparent easygoing attitude or always serious facial expression with a twinkle in her eye, Charlene will definitely get you excited about shower supplies at your local Walmart store.