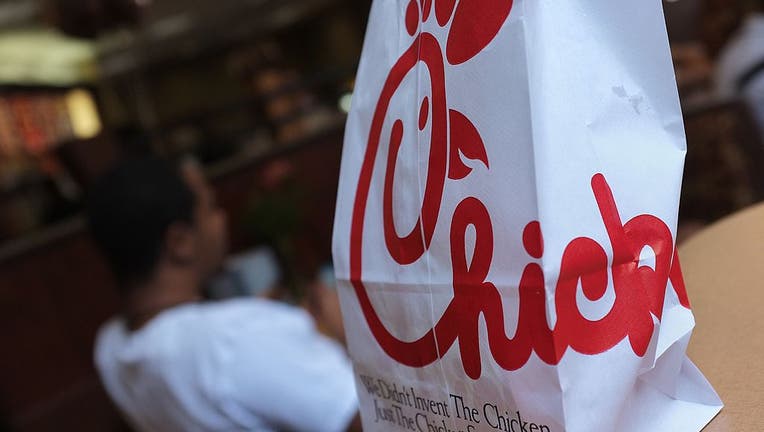 A Chick-fil-A logo is seen on a take-out bag at one of its restaurants.

LOS ANGELES - A fake Chick-fil-A gift basket giveaway is circulating on Facebook and the company is working to get the post taken down, according to a spokesperson with Chick-fil-A.

The post was published by a person, allegedly named Travis Porter, who claimed to be a regional manager for the popular fast food restaurant. 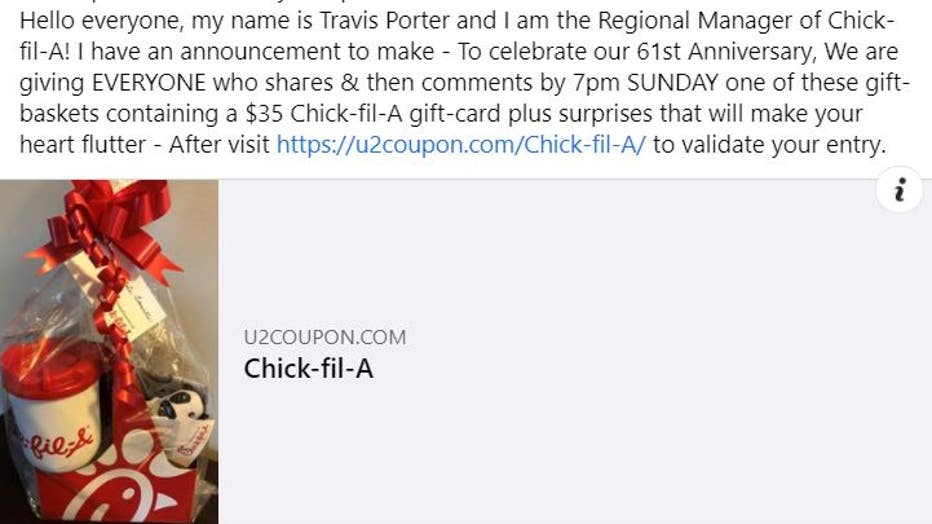 Screenshot of fake Chick-fil-A gift basket give away.

The post reads that in honor of Chick-fil-A’s 61st anniversary, “We are giving EVERYONE who shaᴦes & then comments by 7pm SUNDAY one of these gift-baskets containing a $35 Chick-fil-A gift-card plus surprises that will make your heart flutter.”

Users are then told to click on a link that redirects them to a website where a photo of the alleged gift basket is seen with a button below that reads “validate entry.”

After clicking the button, people are once again redirected to a broken website.

RELATED: Chick-fil-A sauces to be sold in stores across U.S. in 2021

“We are working with Facebook to have the post removed,” a Chick-fil-A spokesperson said.Amid the ongoing COVID-19 pandemic, scams and hoaxes are become more widespread.

Online shopping and the amount of time people spend on their phones has increased, which means more eyes on possible hoaxes or scams.

The Federal Trade Commission recently released a warning in an attempt to prevent more victims from falling prey to fake online posts.

How to avoid COVID-19 scams

Here are ways that can help stop you from being swindled.

Reported losses in the first six months of 2020 reached a record total of $117 million to scams that started on social media, the FTC said on Wednesday. The top sources of the complaints were online sellers that did not deliver, romance scammers and fake phone calls asking for financial assistance.

To combat the social media scams, the FTC gave recommendations on how to make it harder for scammers to victimize a person. Among the tips were to review social media privacy settings and limit what is publicly shared, research a company and its products before a purchase, and to slow down in forming sudden relationships over social media.

Hyeji Suh contributed to this report.