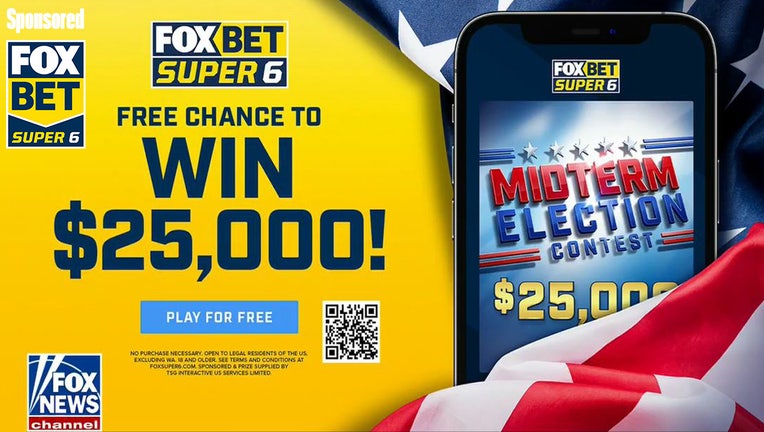 Contestants must correctly answer six multiple-choice questions on possible election outcomes. The FOX Super 6 app is free to download, and the contest is free to enter.

FOX Bet Super 6 is raising the stakes with the latest "Quiz Show," giving Americans the chance to win $25,000 for correctly answering questions about the 2022 midterm elections.

Contestants must answer six multiple-choice questions about possible election outcomes for a shot at the prize. A winner will be announced in the days following the Nov. 8 election when final results are in.

The FOX Bet Super 6 app is free to download, and the contest is free to enter.

"I downloaded it yesterday, it took literally 30 seconds."

Questions include making predictions about which of the selected candidates will receive the fewest votes, which governor’s race will be the closest and which party will hold the majority of Senate seats.

Some questions feature two parts. Contestants must first select the winning candidate or party and then predict the margin by which they won.

The FOX Bet Super 6 app "Quiz Show" has a new series of questions each week on topics ranging from sports to weather to entertainment to politics.

More than $7 million has been paid out to various Super 6 contest winners. App users can also answer questions on various sporting events, including the popular weekly "NFL Sunday Challenge" contest with a $200,000 jackpot.

Fox News contributor Tom Shillue, however, said he plays every week and has only answered four out of six questions correctly.

"I’m at the same disadvantage as everyone else," he told the hosts.

FOX Bet Super 6 is available nationwide with the exception of Washington state.

FOX Bet is an online and mobile sportsbook originally developed through a first-of-its-kind national media and sports wagering partnership in the United States between The Stars Group Inc. and FOX Sports, a unit of Fox Corporation. On May 5, 2020, Flutter Entertainment Plc announced its acquisition of and subsequent merger with The Stars Group.