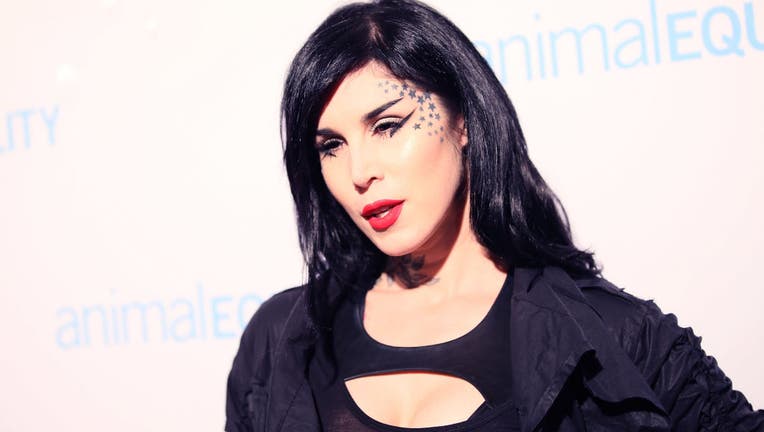 WEST HOLLYWOOD, Calif. - The ex-manager of Kat Von D's former High Voltage Tattoo store in West Hollywood -- who alleges she was wrongfully fired in 2020 for expressing concerns about her boss' alleged disregard for coronavirus mandates and health concerns -- is fighting back against the businesswoman's bid to force the case into arbitration.

In a sworn declaration filed Thursday in Los Angeles Superior Court, plaintiff Stephanie Davidson says that while she did sign an agreement to arbitrate any work disputes with Von D art gallery Wonderland Inc. in 2013 or 2014, that company was later dissolved after a 2014 fire and she did not sign an arbitration agreement when she returned to work for Von D at her West Hollywood tattoo shop, High Voltage Tattoo, in 2017.

Davidson had worked as Von D's personal assistant when she was employed by Wonderland Inc., then she left for other jobs before being rehired by the tattoo artist as HVT's general manager, according to the plaintiff's court papers. Davidson's primary duties in her new job consisted of general shop maintenance, answering phone calls and inquiries, booking and coordinating walk-in tattoo appointments, setting up tattoo stations, ordering and organizing inventory, handling client payments and pay-outs at the end of the day, and handling the shop's social media account, according to her court papers.

Davidson says she believes Wonderland and HVT are separate entities.

In their court papers, lawyers for Von D and High Voltage Tattoo argue that Davidson is bound by the terms of the Wonderland arbitration agreement.

The arbitration agreement's wording states that it applies to Davidson's employment with Wonderland or any of its affiliated entities, the defense lawyers further argue in their court papers.

High Voltage Tattoo closed in March 2020 due to the coronavirus and when California began allowing the reopening of nonessential personal care businesses three months later, Davidson wanted to ensure everyone's safety, the suit states. But her concerns were quickly dismissed by Von D, who "made it clear to Ms. Davidson and other employees that she refused to enforce any of the mandate rules, including the use of face coverings, and continued to go as far as dismissing the COVID-19 pandemic as a whole," according to the complaint.

Von D asked one employee who wore a mask, "You're going to wear a maxi pad on your face?" and also told another worker that the person's choice to don a face covering was influenced by "a state of fear based on mainstream media narrative," the suit states.

Davidson, who is diabetic, felt it was unsafe to return to work after the June 2020 reopening and unsuccessfully tried to reason with Von D regarding her "extremist views on COVID-19 safety precautions," the suit states. The plaintiff later conveyed her health concerns about High Voltage Tattoo to the Los Angeles County Department of Public Health and to Gov. Gavin Newsom's office, the suit states.

Von D also failed to pay Davidson a minimum hourly wage or pay her the overtime rate, the suit alleges.

Last October, the 40-year-old Von D announced she was closing High Voltage Tattoo, which was featured on the TLC reality show "LA Ink," and moving with her family to Indiana.