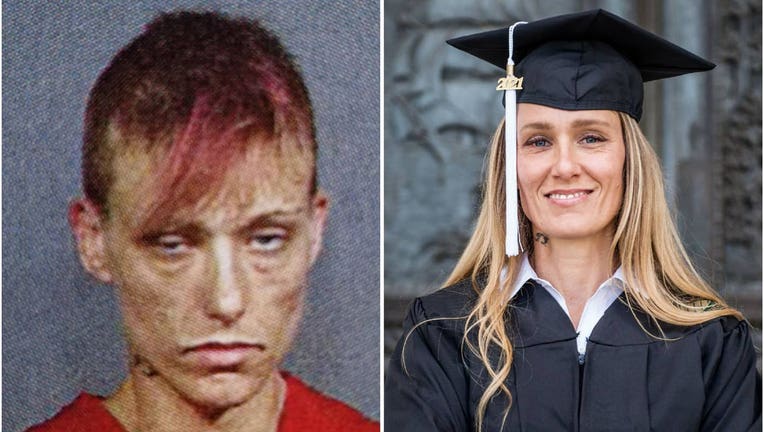 Ahead of her graduation ceremony, Burton shared these photos -- a 2005 mugshot during "one of the most intense times" of her addiction and her graduation photos -- on Facebook. The post quickly went viral. (Courtesy of Ginny Burton/Jo Arlow)

Ginny Burton has been sober for nine years.

After struggling with drug addiction for most of her life, Burton got clean in 2012. The mom of three graduated from the University of Washington with her degree in political science in June.

In May, ahead of the ceremony, Burton, now 48, shared one of her graduation photos alongside a mug shot taken in 2005, during "one of the most intense times" of her addiction, Burton told Fox News, at a time when she "had a tremendous heroin habit" and was "smoking a lot of crack cocaine."

"I just thought that, besides the fact that there was such a vast contrast there and it just really for me, it just showed the depth of my journey in those two photos," Burton told Fox News.

As September's National Recovery Month came to a close, Burton spoke with Fox News about her journey.

"There were seven of us kids and so our existence was really chaotic," Burton told Fox News. "So I found, in time, that my relationship with drugs actually provided me an escape…My life just sort of unraveled in that way. And I was becoming the exact thing that I did not want to become, which was my mom." 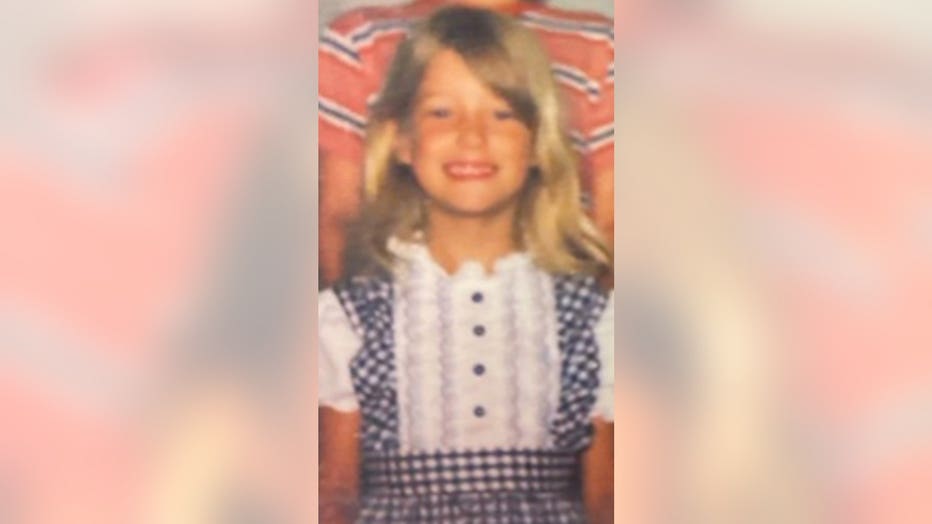 Burton told Fox News that she was introduced to drugs by her mother when she was only seven years old. Burton is 6 in this picture. (Courtesy of Ginny Burton)

Even though she had loved school as a child and had wanted to become an attorney, Burton said the last grade she finished was the sixth grade. She said she was in and out of seventh and eighth grade – doing classwork when she was in juvenile hall. By ninth grade, Burton "officially quit school."

"I became everything that I never wanted to be," Burton said.

She said that as she got older, her "addiction just really spiraled out of control."

When she was in her 20s, Burton said she was in and out of prison. Though she got sober for about a year and a half, after her second prison term she ended up relapsing.

"I had a really hard time," Burton said. "Once I started using again, I had a hard time quitting."

Around that time, Burton’s grandmother, who played a big part in raising her, and her mother both died. Burton said she then married a man who was abusive.

"I didn’t think I could pull myself out of it, so I thought that using would be the best way to alleviate what I was experiencing," Burton said, adding later: "It was almost like I was watching my life from the outside. I started using and then I couldn’t stop and I wanted to stop and I could not stop for anything."

"Even when I was arrested and knew I didn’t want to be using anymore. I ended up getting bailed out the first time. I still immediately went back to the using," Burton said.

In 2012, Burton was arrested again, but this time the bail was set too high and she was unable to be released, she said. She was also given the opportunity to go to drug court and had support to get a private attorney.

Burton spent six months in jail and during that time, she went through withdrawal and was finally able to do "a lot of personal work on myself," she said. 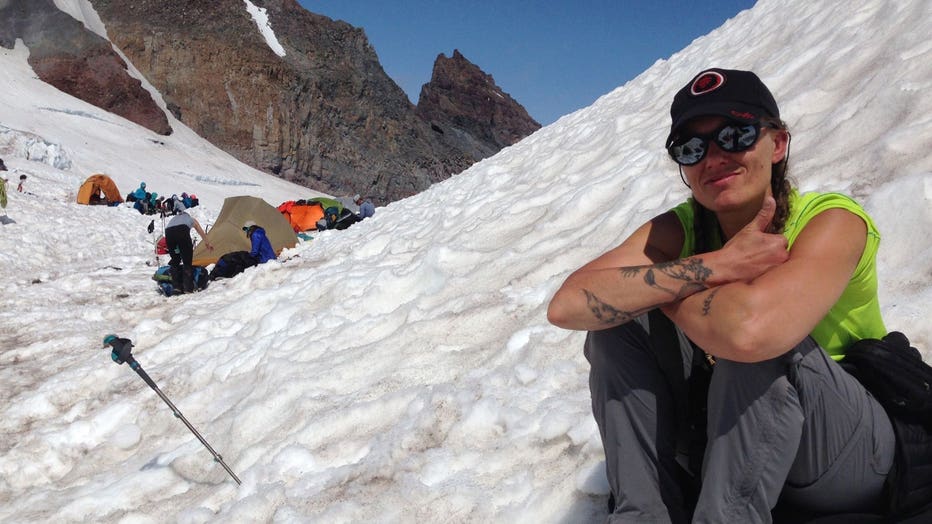 Over the last nine years, Burton has gotten into hiking, climbing, cycling and running, which has been "probably the most transformative thing that I have ever allowed myself to experience," she told Fox News. (Courtesy of Ginny Burton)

"I recognized that my problem was me," Burton said. "It wasn’t what my mom did to me, it wasn’t the abuse that I experienced from my husband, but it was the choices that I was making. And so I became really, really committed to figuring me out, to changing the narrative."

"I recognized that the messages that I had been giving to myself, those came from somewhere else and at some point, I made the decision to consent to making those my truths," she added. "And so, it had to be possible for me to change those things."

Burton said she would write down positive words and repeat them to herself every day, sometimes multiples times a day.

"Eventually I was able to actually look myself in the eyes and tell myself that I love myself," Burton said. "So that’s what I’ve done every day for the last almost nine years as I’ve reaffirmed those messages."

Over the last nine years, Burton has gotten into hiking, climbing, cycling and running, which has been "probably the most transformative thing that I have ever allowed myself to experience," she said. 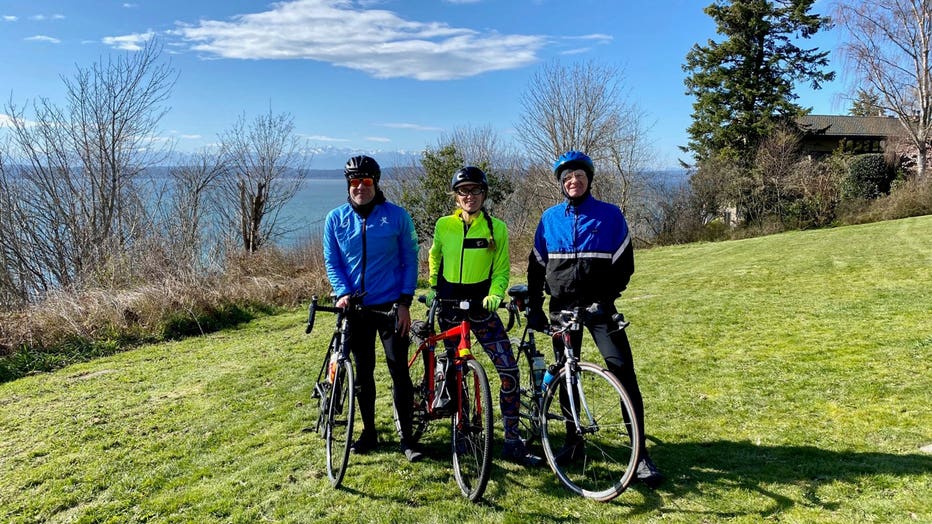 Today, Burton surrounds herself with "people that have common goals," she told Fox. She also continues to participate in Narcotics Anonymous and sponsors women who are also in recovery. (Courtesy of Ginny Burton)

Burton and her 15-year-old daughter just moved to San Diego from Rochester, Washington, for a new job opportunity. Her older children are 28 and 29.

Burton also posts about her recovery journey on social media as a way to encourage some of her friends who are still in active addiction, who she keeps in touch with online.

"Because so many people know what my life was like when I was in addiction, it was really important to me to share those pictures and to show people what’s possible," Burton said.

Those kinds of posts can be really helpful for people in recovery, who may feel isolated and alone, according to Brad McLeod, the moderator of Sober Motivation, a blog and Instagram page that shares people’s stories of recovery.

"When people can see that, they relate with that, they kind of think to themselves, ‘Well, it’s been done before,’" McLeod told Fox News. "‘So-and-so is figuring it out, so maybe I can give it a try.’"

McLeod, 34, from Ontario, Canada, started his own recovery from addiction to heroin and prescription pills in 2010.

He had grown up in North Carolina, but "got in trouble with the law too many times," and was deported back to Canada because of his addiction.

Once he was back in Canada, McLeod said he "started over" and went back to school, where he studied addiction counseling. Currently, he works in digital marketing and runs the Sober Motivation blog, which he started in 2018 "to help get the word out there that recovery was possible," he said. Today, the Instagram page has more than 74,500 followers.

"When I first started my journey, it was more or less in church basements, 12-step meetings, rehab," McLeod said. "It was a lot different. You didn’t really talk about it. Not many people talked about it."

"My intention for [Sober Motivation], my hope for it, is that it can help people feel like they’re not alone and maybe there’s something in somebody’s story that they can relate to, to either keep going with their own sobriety or maybe people can use it as a place to get started," McLeod said.

"A lot of people are getting sober in different ways, not just your traditional treatment or your 12-step meetings anymore," McLeod said. "There’s a lot of different groups that people will form and different communities."

McLeod said that the internet can be a helpful place for people to get started on their recovery journey.

RELATED: Couple adopts 2 sets of twins to keep family together: 'We have a lot of love'

"The internet's a great way to reach out anonymously and start a conversation with people," he said. "I know that's what a lot of people are worried about is what other people are going to say."

McLeod also encouraged addicts seeking help to check out clinics, talk to professionals and doctors and just start having conversations with people.

"It’s just the awareness," McLeod said. "You have to be aware that there’s something going on. Just get honest with people about it, that this is going on."

He added that people should also have proper expectations for their recovery journey.

"Things aren’t likely to change right away, but once you start building that awareness, just like with any other major behavior stuff that’s going on, then you can start to chip away and maybe get more comfortable and you can start to talk to people a little bit more about it," he said.

"I think a lot of people put pressure on themselves, like 'I've got this problem with drugs and I have to fix it today,'" he added. "But a lot of us -- like for me it was years in the making… It was a lot of attempts, like 30, 40 attempts [to get sober]."

He continued: "You just kind of have to keep getting up, get back up and start small and get back to it. Find a community of people that, you know, support you, whether that be around you, virtually, fellowships treatment center…therapy."

For Burton, she continues to participate in Narcotics Anonymous and sponsors women who are also in recovery.

"It’s really important for me to be around people that have common goals," Burton said, adding that she has what some in addiction recovery call a "built-in forgetter," which means she forgets how harmful it is to her when she uses drugs. Because of that, she has tried to cultivate her circles around people who don’t use drugs or drink.

"I participate in a program of recovery and strategically put people in my life that are practicing different kinds of things," Burton said.

She also continues to encourage friends who are still struggling with addiction online and through social media, by sharing her own story and the things she still struggles with, even nine years after getting clean.

WHY THIS FATHER IS WALKING FROM MAINE TO NORTH CAROLINA, BAREFOOT

She told Fox News that she shared that post to encourage her friends not to give up.

"I want them to see that it doesn't matter how old we are, we can make a new decision at any moment," Burton said. "It doesn't mean that it's not going to be hard."

She added: "I specifically shared those [pictures] for that purpose, to show the contrast and to say I don’t care where you’re from, what you’ve done, what your life looks like and how old you are. We can do this."

If you're struggling with addiction, the Substance Abuse and Mental Health Services Administration can help you locate a treatment facility. Their helpline is free, confidential and open 24 hours a day: 1-800-662-HELP (4357).