SURFSIDE, Fla. - The number of people missing in the Florida condominium collapse fell Friday following a new review, but fears of another potentially catastrophic failure deepened after engineers found unsafe conditions in a different tower and ordered the entire building evacuated.

The city of North Miami Beach announced that an audit prompted by the deadly collapse of Champlain Towers found the 156-unit Crestview Towers building structurally and electrically unsafe.

"In an abundance of caution, the City ordered the building closed immediately and the residents evacuated for their protection, while a full structural assessment is conducted and next steps are determined," City Manager Arthur H. Sorey III said a news release.

Meanwhile, authorities in Surfside said four more bodies had emerged from the rubble, including the 7-year-old daughter of a Miami firefighter, bringing the confirmed death toll to 22.

Miami-Dade County Mayor Daniella Levine Cava said Friday morning that the two additional bodies were found overnight. One of the victims was the 7-year-old daughter of a City of Miami firefighter.

Levine Cava said searchers found the victims among the rubble of the building Friday.

The Miami-Dade mayor also has signed an emergency order to demolish the remaining part of the building once engineers have signed off on it. She said the order was signed now so that the demolition can move quickly once a date is set.

Miami Mayor Francis Suarez said the family had asked for privacy and the child’s name was not released.

"She was a member of our fire family," Suarez said, adding that the entire fire department is grieving.

Levine Cava noted that each night has been immensely difficult for the families and search-and-rescue teams combing through the pile for any potential survivors or human remains. But she said upon the discovery of the firefighter’s daughter, "it was truly different and more difficult for our first responders."

The collapse of the 12-story Champlain Towers South condominium in the town of Surfside, located just north of Miami Beach, has also left 126 others missing. No one has been rescued since the first hours after the tower collapsed, which was occurred around 1:30 a.m. on June 24.

The victims were discovered following a 15-hour halt on rescue efforts due to safety concerns at the site. The rescue work had been paused shortly after 2 a.m. Thursday after crews noticed widening cracks and up to a foot of movement in a large column. The work resumed shortly before 5 p.m. after the site was evaluated by structural engineers.

Scott Nacheman, a FEMA structures specialist, said engineers are now looking at different methods for the likely demolition, even as teams continue to comb through the rubble beneath it for victims, and how to proceed "to make the site safe for ongoing rescue operations,"

Nacheman said that if the building comes down, there initially will be a slowdown in the rescue operation. But he said the demolition of the structure would create a safer working environment that could allow more personnel on the site and accelerate the pace of the work.

He added that it would likely be weeks before officials schedule the demolition.

Levine Cava said Monday evening that the decision about the demolition needs to be made "extremely carefully and methodically," considering the potential impact on the pile of debris and the effect on the search. 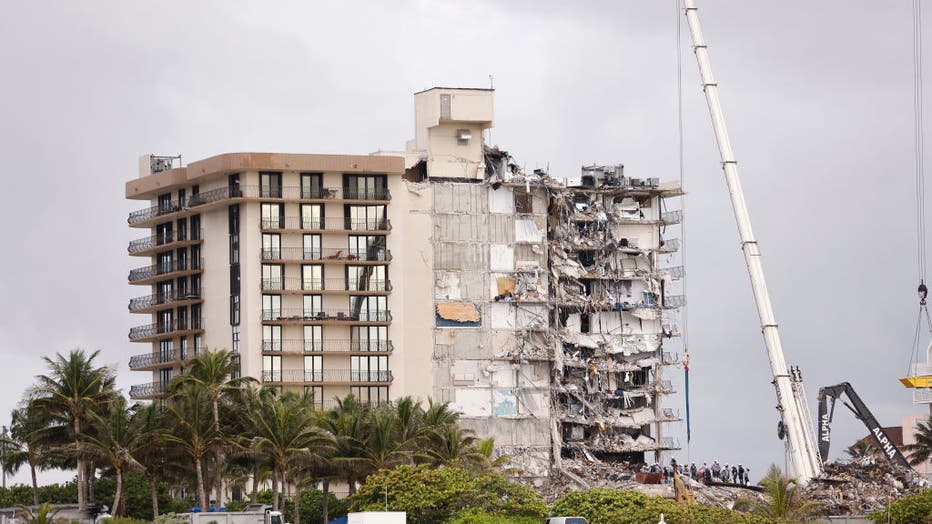 Hundreds of search-and-rescue personnel have been painstakingly searching the pancaked rubble around the clock for days for any potential signs of life. The collapse of the building left layer upon layer of intertwined debris, frustrating efforts to reach anyone who may have survived in a pocket of space.

Miami-Dade Fire Chief Alan Cominsky said rescuers heard the voice of a woman trapped under the rubble during initial search following the collapse but were unable to locate her.

The temporary pause of rescue operations came on the same day as President Joe Biden and first lady Jill Biden visited the devastated community. Biden thanked the search teams and urged families to "never give up hope."

Addressing some of the families touched by the tragedy, Biden spoke in deeply personal terms as he offered his prayers and support in the private meeting.

"I just wish there was something I could do to ease the pain," he said in a video posted on Instagram by Jacqueline Patoka, a woman who was close to a couple and their daughter who are still missing.

Biden told the families that it can be "harder to grieve in public than it is in private, so I know there's an extra burden on you all."

"But I promise you: I still believe in prayer," he said. "You’re in my prayers."

President Joe Biden spoke to search-and-rescue teams who have been working around the clock at the site of a deadly condo collapse in Surfside, Florida, in an effort to find any survivors, on July 1, 2021.

Attendees could be seen with tears in their eyes as Biden closed out his remarks, and he and wife, Jill, spent the next few hours visiting privately with the families.

"This is life and death," Biden said a briefing about the collapse. "We can do it, just the simple act of everyone doing what needs to be done makes a difference."

The president said he believed the federal government has "the power to pick up 100% of the cost" of the search and cleanup and urged the local officials to turn to Washington for assistance.

The tower has a mix of seasonal and year-round residents, and while the building keeps a log of guests, it does not keep track of when owners are in residence, local officials said. The missing are from several countries around the world.

Footage shared on TikTok shows a stream of water spilling into the basement level garage of Champlain Towers South prior to its partial collapse in the early hours of June 24.

Just two months before the building came down, the president of its board wrote a letter to residents saying that structural problems identified in the 2018 inspection had "gotten significantly worse" and that major repairs would cost at least $15.5 million. With bids for the work still pending, the building suddenly collapsed last Thursday.

State Attorney Katherine Fernandez Rundle said she will pursue a grand jury investigation to examine all factors and decisions that led to the collapse.