A fiery crash on a busy stretch of highway in Ohio was caught on camera Thursday morning.

At 7:29 a.m., a dump truck traveling on Interstate 77 in Green, Ohio, struck an Ohio Department of Transportation (ODOT) vehicle that was on the shoulder, causing a huge explosion.

Traffic cameras captured other vehicles swerving to avoid the fire as smoke billowed from the grass and trees lining the highway.

An ODOT employee was inside the vehicle at the time of the crash, according to local news media. 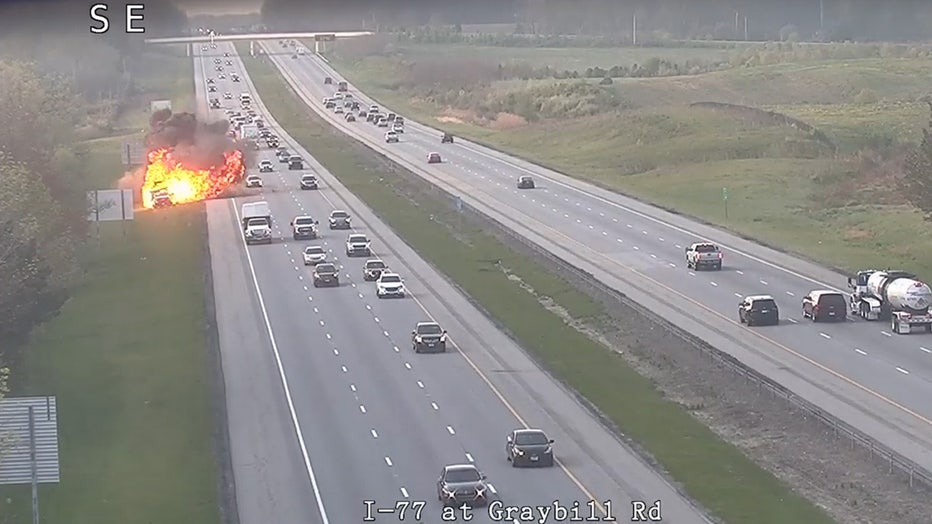 Both the driver of the dump truck and the ODOT employee were taken to the hospital after being rescued from the burning vehicles, the Summit County Sheriff’s Office said in a Facebook post.

"Early today, an ODOT District 4 Highway Technician was struck alongside Interstate 77 in the City of Green. He was transported to a local hospital and is currently being treated with serious, but non-life-threatening injuries. We are extremely fortunate he is alive as this could have had a much different outcome. Our thoughts and prayers are with him and his family," ODOT said in a Facebook post.

The current condition of the dump truck driver was not shared and the crash is being investigated by the sheriff’s office.

Storyful contributed to this report. This story was reported out of Los Angeles.