Edwardsville, IL, tornado before and after photos. (FOX Weather)

EDWARDSVILLE, Ill. - Federal investigators are ordering Amazon to review its severe weather procedures after a tornado outbreak in December was responsible for the partial collapse of a warehouse outside of St. Louis, Missouri, that killed six contractors.

The Occupational Safety and Health Administration said the retailer’s severe weather emergency procedures met the minimal federal safety guidelines, but there are steps the company could take to further protect workers and drivers.

The National Weather Service provided sufficient warning for December’s EF-3 tornado, but an OSHA report stated workers did not recall where the designated severe weather shelter was located in the Edwardsville, Illinois facility.

A federal inspection letter states several of the workers killed at the facility, took shelter in a restroom near the loading docks, which was not the designated safety room.

NWS meteorologists estimated winds of the twister to be around 155 mph when it decimated parts of the warehouse.

The company responded to the report with a statement that read:

"The storm in Edwardsville last fall was a tragedy and our teams on the ground continue to support our employees and the broader community as they work to recover. The tornado that hit our delivery station was extreme and very sudden, with winds that were much like the force of a category 4 hurricane, and we believe our team did the right thing, moving people to shelter as soon as the warning was issued. Our buildings—including the Edwardsville delivery station—have emergency plans that identify exit routes and shelter areas. Employees receive emergency response training, and that training is reinforced throughout the year. OSHA’s investigation did not find any violations or causes for citations, but we’re constantly looking to innovate and improve our safety measures and have already begun conducting additional safety and emergency preparedness drills at our sites and will carefully consider any OSHA recommendation that we have not already."

The online retailer is the subject of lawsuits by victims’ families, whose lawyers claim the deaths were preventable.

Following the release of the letter, OSHA Regional Administrator William Donovan said all employers should take time to re-evaluate their emergency plans to keep workers safe.

"These tragic deaths have sparked discussions nationwide on the vital need for comprehensive workplace emergency plans," Donovan said in a statement.

The EF-3 tornado was one of more than 70 twisters that formed during the December outbreak, which caused nearly $4 billion of damage and was blamed for more than 80 deaths. 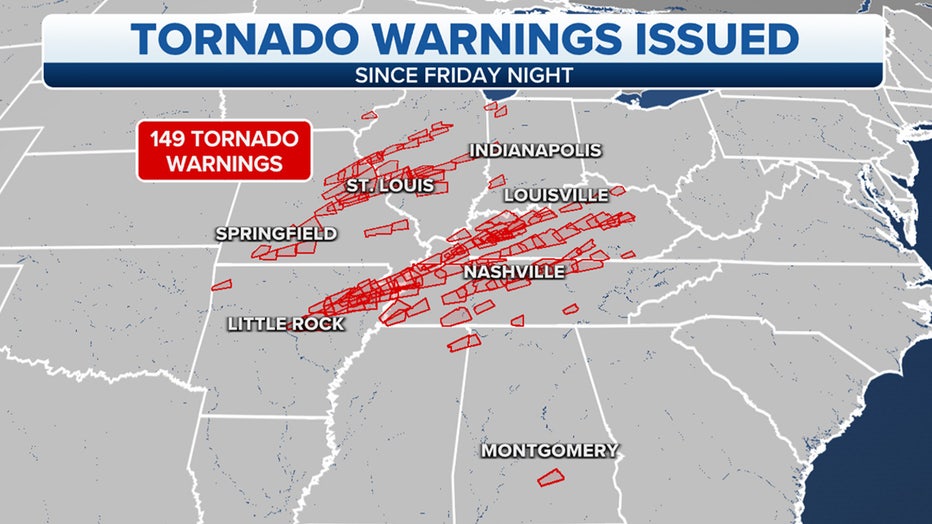 This graphic shows all of the tornado warnings that were issued from the Dec. 10 tornado outbreak. (FOX Weather)