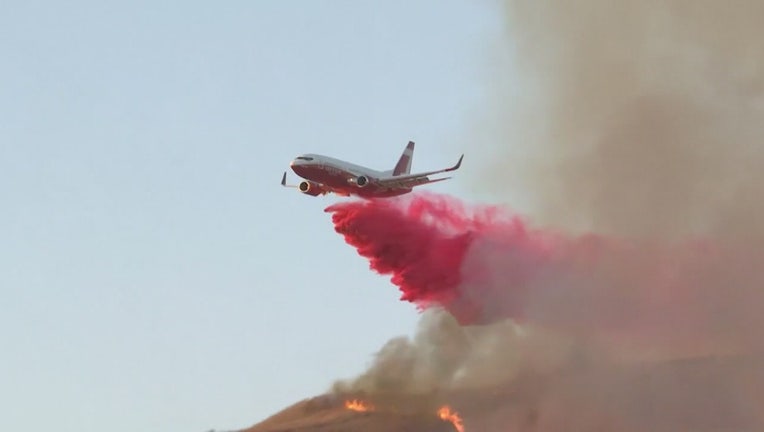 PORTER RANCH, Calif. - Firefighters working under a red flag warning on Sunday continued the process of containing the Saddleridge Fire in the northern San Fernando Valley and looking for hot spots to put out as low humidity and gusty winds returned.

A red flag warning expired Sunday night, but strong winds are still blowing. Leah Uko is live in Porter Ranch where many are still worried about possible fires.

The blaze has burned nearly 8,800 acres, destroyed 19 structures, damaged 88 more since it erupted the night of Oct. 10 off the westbound Foothill (210) Freeway near Yarnell Street and Saddleridge Road in Sylmar. The fire was 83% contained as of Sunday evening, the fire department said.

"Wind gusts of 40 to 60 mph will be common," the weather service statement noted, with the strongest winds along the Interstate 5 corridor.

"Minimum humidities will generally range between 8 and 20 percent through Sunday. Recoveries at night will be moderate across the north facing mountains with poor recoveries in the foothills and downslope mountain and valley areas," the weather service said.

"Areas under a Red Flag Warning will have an increased threat of large fires, along with very rapid fire spread and extreme fire behavior with any new fire ignitions," the weather service said. The so-called "weak" Santa Ana wind event is expected to continue into mid-week.

Near the fire zone, a wind advisory was in effect until 11 a.m. today in the San Fernando Valley, with sustained north winds of 20 to 30 mph and gusts of up to 50 mph. A wind advisory will be in effect during the same hours in the Los Angeles metro area.

"Weather conditions over the next 48 hours will test current containment and open lines," the Los Angeles Fire Department said in a statement Friday night.

The department announced Saturday that the united command consisting of them, the Los Angeles County Fire Department and the U.S. Forest Service has been disbanded.

Authorities warned that gusting winds could potentially kick up smoldering embers and ignite new blazes in and around the fire zone, and urged residents to call 911 immediately if they spot any fresh flames.

Given the forecasted winds, Southern California Edison again warned of possible "Public Safety Power Shutoffs," meaning transmission lines in danger of being damaged by high winds could be de-energized to prevent possible wildfires, but resulting in customers losing power.

After it began last week, the Saddleridge Fire quickly spread due to wind-blown embers that jumped the Golden State (5) Freeway spreading flames into Granada Hills and Porter Ranch. At the height of the fire, an estimated 100,000 residents were under mandatory evacuation orders, all since lifted.

The cause remains undetermined, but the point of origin was identified by Los Angeles Fire Department arson investigators as a 50-foot-by-70-foot area beneath a Southern California Edison high-voltage transmission tower near Saddleridge Road, officials said.

A Porter Ranch resident, identified by neighbors as 54-year-old Aiman Elsabbagh, died of a heart attack Oct. 11 while trying to protect his home from the fire. LAFD Chief Ralph Terrazas said the man was speaking to firefighters when he went into cardiac arrest, and later died at a hospital.

Torres -- a ranger for more than 40 years -- had been patrolling the parks impacted by the fire.