The record number of early votes, including many by mail, has been driven in part by the COVID-19 pandemic.

More than 95 million Americans have voted in the 2020 presidential election with less than 24 hours until Election Day.

Overall, early voters across the country have already cast 69% of all the votes counted in the 2016 general election, according to the U.S. Elections Project. The site provides election information and turnout data and is run by University of Florida professor Michael McDonald.

The record number of early votes in the race between President Donald Trump and Democratic nominee Joe Biden has been driven in part by safety concerns about in-person voting due to the COVID-19 pandemic.

In total, most election experts think the United States will see 150 million to 160 million ballots cast in 2020. 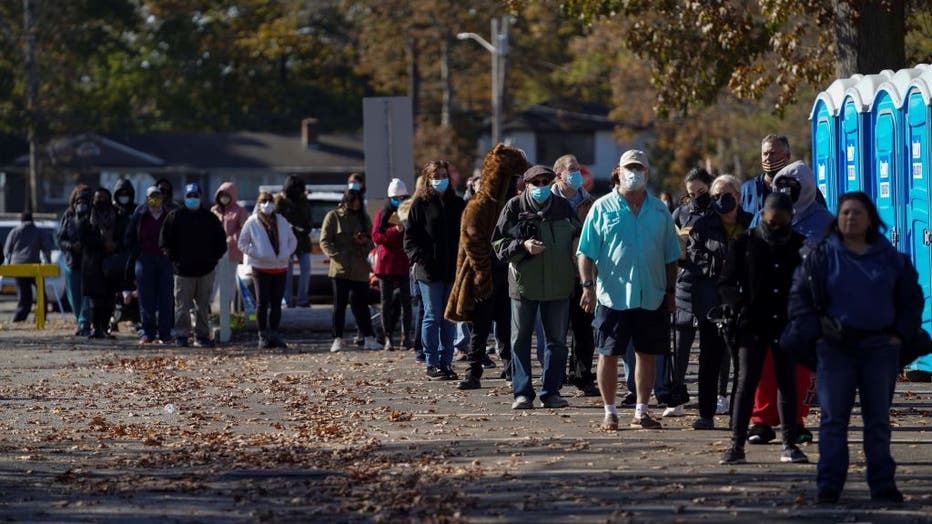 People wait to cast their ballots at a polling station in Suffolk County of the New York State on Oct. 31, 2020. (Photo by Wang Ying/Xinhua via Getty)

States are seeing record pre-Election Day turnout individually, too — having either already surpassed or are quickly approaching their total number of ballots counted in 2016.

Texas has already topped the total number of ballots counted in all of 2016 — with still a day to go. More than 9.7 million Texans have voted early this year, compared to an estimated 8,975,000 ballots cast in the last presidential election, according to Election Project data.

Traditionally, Republicans have had high turnout in the weeks before Election Day. But Trump has made repeated, unfounded claims this year about the risk of widespread fraud with mail-in voting, while Biden's campaign has urged supporters to vote early, whether by mail or in person.

Early turnout this year has consisted of far more Democrats (21 million) than Republicans (14 million), according to the U.S. Elections Project data compiled Monday.

The lopsided number of early votes does not mean Democrats will lead once all the ballots are counted, though. Both parties anticipate a swell of Republican votes on Election Day that could dramatically shift the dynamic.

International monitoring group has eyes on 2020 election in US

More young people, ages 18 to 29, have also voted early this year as compared to early voting from the same age group in 2016, according to data from the Center for Information & Research on Civic Learning and Engagement.

This includes early voting in key swing states, such as Florida, North Carolina, Michigan and Pennsylvania, that may help decide the presidency and the U.S. Senate majority.

RELATED: Here are the Senate races to watch in the 2020 election

Amid the record number of voters, both in-person and by mail due to the coronavirus, the vote-counting timeline is also expected to be somewhat delayed. Election officials have stressed for months that we may not know who won the presidential race on Tuesday night — which is not unusual.

In 2016, Trump was not declared the winner until early in the morning after Election Day.

This year, the biggest factor that may slow things down is the sheer volume of mail ballots, which take longer to count. Election workers must remove the ballots from their envelopes, check for errors, sort them and flatten them — all before they can be run through scanners the moment polls close and be tabulated.

FEC Commissioner Ellen Weintraub discusses the possibilities and reasons behind why there may be a delay in election results.

In states with well-established vote-by-mail programs, this processing happens weeks before Election Day. But several states did not have this system in place before this year and laws on the books prohibited election officials from processing the ballots well in advance of Election Day.

Without a head start, there's virtually no way to process and count all the mail votes on Election Day, while also counting all the in-person votes.

Media organizations declare winners in thousands of races on election night based on the results that are in, voter surveys and other political data. But in a tight race, more of the vote may need to be counted before outlets like the Associated Press can call a winner.