Every third Tuesday of the month, Heirloom LA hosts a nonprofit for a cooking class meant to learn and inspire.

LOS ANGELES - Coming together through cooking. On this night in downtown Los Angeles, there were the joyous sounds of a lot of cooks in the kitchen coming from catering company Heirloom LA. It was a cooking class and a mentorship meal called My Brother's Keeper.

Matt Poley, chef and founder of Heirloom LA, does this every third Tuesday of the month with a nonprofit. Twinspire was the nonprofit they last hosted. It was founded by twins once in foster care — Demontae "Tay" and Demonte "Tray" Thompson. They're young adults now but grew up in Compton and were in foster care before being taken in by an elderly uncle. Now, college grads, their nonprofit is working to uplift other foster youth and those who've been marginalized. 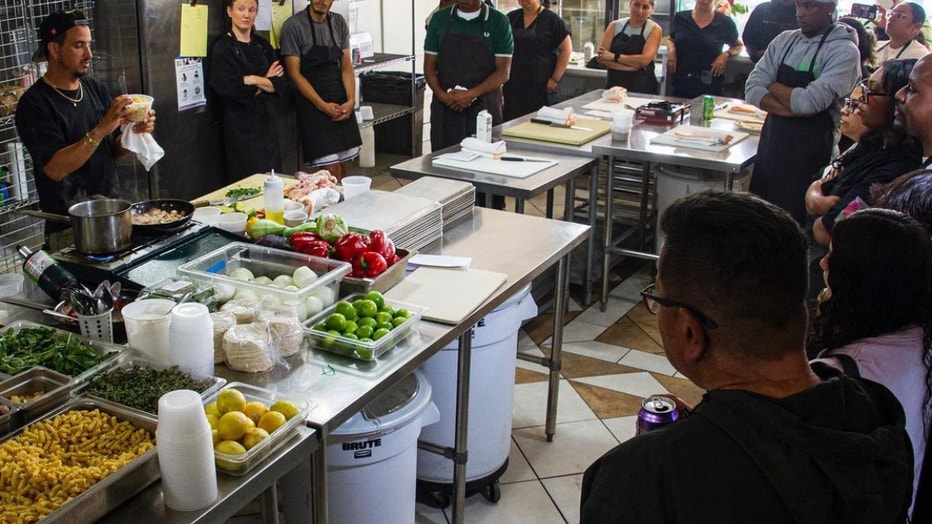 This night was about friends of all walks, fellowship and learning how to cut up and cook a chicken. On the menu, chicken tacos and chicken alfredo pasta. Paco Mejia is a long-time chef at Heirloom LA and showed off how to make delicious chicken alfredo. The goal also is to take away the fear of cooking. Forty chickens were donated on this night.

Twinspire teaches financial literacy to marginalized youth, among its many programs. The night was also about learning how to stretch the dollar in these tough economic times.

"MMMMhhhhhmmmm," said Yisselle Rivero as she enjoyed a chicken taco after a night of cooking in the kitchen with camaraderie and community.