PHOENIX - A dog who was missing for months after he and his owners were involved in a rollover crash is now home safe.

The Arizona Department of Public Safety says Bubba and his owners were involved in a single-car rollover crash on U.S. 93 near milepost 147 on Feb. 13.

After the crash, Bubba was nowhere to be found. Flyers were put up around the area and social media posts were shared in hopes of reuniting Bubba with his owners.

On May 7, there was a sighting of Bubba near the crash site and the wife of DPS Trooper Waterman asked him to keep an eye out for Bubba in the area of the sighting.

The same day, DPS received a report from a trucker who spotted a dog at milepost 148 on U.S. 93.

"Unable to catch Bubba but concerned about leaving him behind, she left him food and water before calling in the sighting," DPS said in a news release.

Trooper Waterman responded to the area and found Bubba who was "looking skittish and emaciated."

"He put out more food and water, planning to come back daily to keep an eye on Bubba and try to gain his trust," DPS continued.

As Trooper Waterman prepared to leave the area for another call, he looked around for Bubba to relay the pup's location to a rescue group. However, after looking behind a large mound of dirt, the trooper found Bubba fast asleep.

Trooper Waterman was able to lead Bubba to his patrol car.

Bubba was then brought to an animal control center in Kingman for treatment.

After three months, Bubba is finally back home safe with his owners. 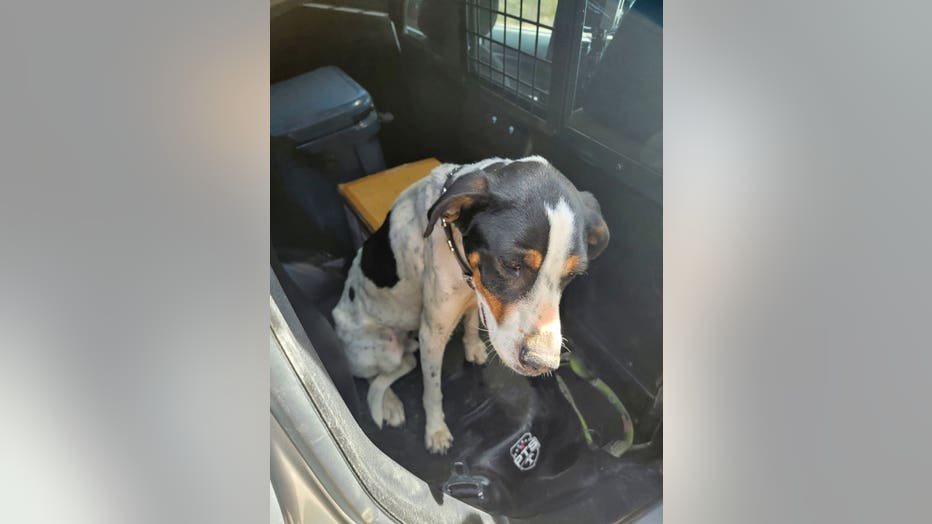 A dog who was missing for months after he and his owners were involved in a rollover crash is now home safe. (Arizona Department of Public Safety)