The Dodgers plan to hold a ceremony to honor LA legend Vin Scully before first pitch of Friday's game against the San Diego Padres.

The Los Angeles Dodgers will honor the legendary broadcaster Friday with a special pre-game ceremony prior to the game against the San Diego Padres at 7:10 p.m.

On Wednesday, the Dodgers debuted a commemorative black patch featuring a microphone and the word "Vin" which the players will wear through the remainder of the season.

The Los Angeles Dodgers will honor the legendary broadcaster Friday with a special pre-game ceremony prior to the game against the San Diego Padres.

During Friday’s home game, the first since Scully’s passing, fans will also have the chance to pay their respects at various locations throughout Dodger Stadium. Behind the Vin Scully Press Box, which was named after the Dodger icon in 2001, the "I’ll Miss You" banner from Scully’s last game at Dodger Stadium will be on display.  Additionally, his World Series rings will be featured beginning August 19. 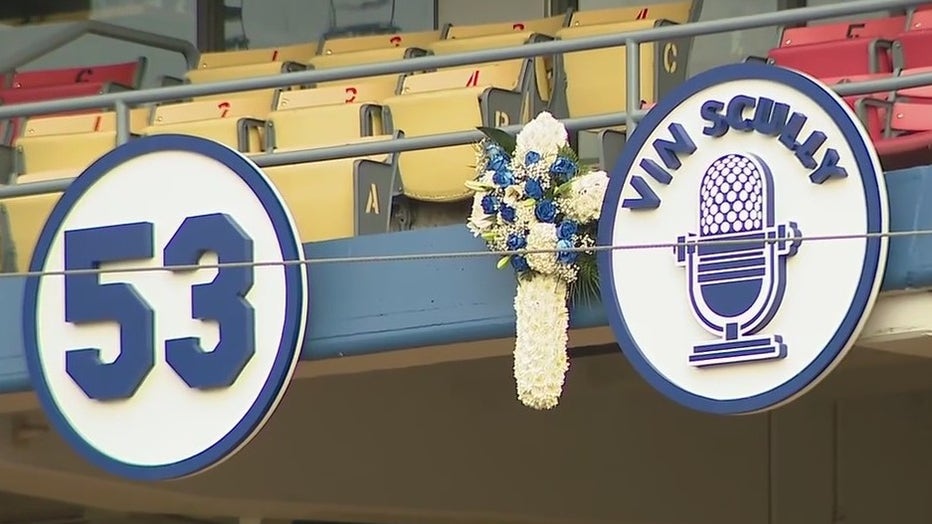 Miniature versions of Scully’s microphone from the Dodgers’ Ring of Honor will also be placed in any existing Scully displays at Dodger Stadium. Fans will be able to stop for a moment whenever they pass one of these icons to read about the life and legacy of Vin Scully.

Dodger icon Vin Scully has died at 94. For more than 60 years, he brought generations of Angelenos and the sports world together with the five simple words: "It's time for Dodger baseball!"

In April 2016, a portion of Elysian Park Avenue was renamed and dedicated to Scully changing the Dodger Stadium address to 1000 Vin Scully Avenue. That same year, he was inducted into the Dodger Stadium Ring of Honor and received a Presidential Medal of Freedom.

Ticket-holders are encouraged to be in their seats by 6:30 p.m. for the 7:10 p.m. game against the Padres as the team commemorates the Hall of Famer who passed away this week at the age of 94.