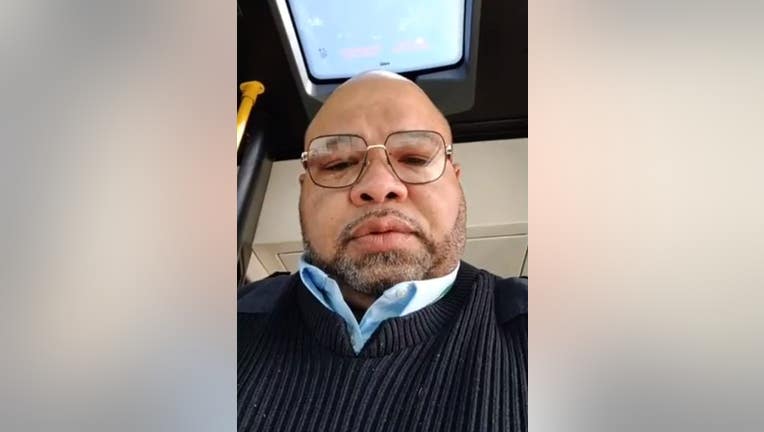 DETROIT (FOX 2) - A Detroit bus driver who went live on Facebook two weeks ago to complain about a coughing bus rider has died of Covid-19.

Jason Hargrove went live on Facebook about two weeks ago to complain about a woman who was on his bus, coughing repeatedly without covering her mouth. Four days later, his union says he was quarantined and then on April 1 he passed away.

“I’m trying to be the professional, they want me to be and I kept my mouth closed, but it’s at some point in time where you got to draw the line and say enough is enough. I feel violated; I feel violated for the folks that were on the bus when this happened. There was about eight or nine people on the bus that stood there as she coughed and never covered up her mouth,” Hargrove said in his video.

It’s not known right now when exactly Hargrove became sick or if his sickness could be connected to the female passenger.

Hargrove also pleaded in his video for other bus passengers to take social distancing and Covid-19 seriously.

“This is real. Ya’ll need to take this serious. This is real. I’m out here, we out here, we're moving the city around back and forth trying to do our jobs and be professional about what we do,” Hargrove said.

Mayor Duggan talked about the loss of Hargrove weighing heavily on the City Thursday.

“Everybody in Detroit and everybody in America should watch [Hargrove's Facebook live video]. Because he was infected before we closed the front doors and he tells the story of a passenger getting on the bus and coughing on him, and, some of his language is graphic, but I don’t know how you can watch it and not tear up. He knew his life was being put in jeopardy - even though he was going to work for the citizens of Detroit every day - by somebody who just didn’t care. Somebody who didn’t take this seriously. And now he’s gone," Duggan said.

Duggan remembers DDOT bus driver who died: ‘Everyone should see his video’

Mayor Mike Duggan talked about a DDOT bus driver who died of Covid-19 just weeks after complaining about a rider who was coughing without covering their mouth.

Bus services in Detroit are still operating right now, though at limited capacity.

Though on March 17, bus service was canceled entirely due to a shortage of drivers. Many of them called in sick that day to take a stand, saying the City was not doing enough to address their health and safety concerns amid the virus crisis.

After that day, Duggan decided to stop collecting fares and to close the buses front doors and have riders board and de-board in the back, which he referenced earlier, saying that Hargrove got sick before this decision was made.

On Thursday, Duggan announced additional efforts to bus drivers including temperature checks, like what the City is doing for first responders, and additional housing at hotels for drivers who are quarantined. He said 133 are currently quarantined and that eight have tested positive for Covid-19.

At the time Hargrove went live on Facebook, he didn’t seem upset that the city’s bus system was still operational.

He called the woman’s actions disrespectful.