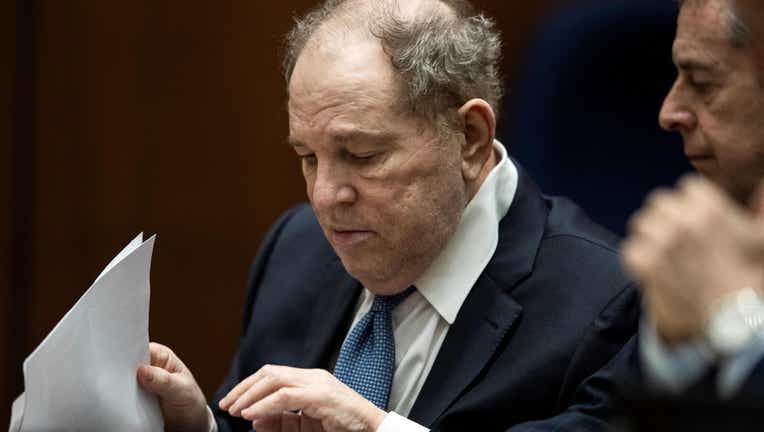 LOS ANGELES (AP) - A dancer in a film produced by Harvey Weinstein testified Thursday that she was "freaked out" after meeting the movie mogul on the Puerto Rican set but the presence and reassurance of his assistant convinced her it was OK to go with him to his hotel, where she was later sexually assaulted.

The woman, who went by her first name and last initial Ashley M. at the Los Angeles trial where Weinstein is charged with rape and sexual assault, said she was a 22-year-old in 2003 when she was acting as a dancing double for one of the stars of "Dirty Dancing: Havana Nights," a film produced by Weinstein’s company Miramax.

She said Weinstein’s assistant at the time, Bonnie Hung, told her that she would remain with the two of them the entire time, and that he just wanted to talk about future projects.

As they walked down the hall of Weinstein’s hotel toward a door, she said, "I started to get more worried, but Bonnie was there with her clipboard."

"Harvey opened it and then he went in and I went in," she said, pausing as she began to cry. "And then Bonnie shut the door behind us. I was like, ‘oh no, what do I do?’"

The woman was the second Weinstein accuser to take the stand at the trial, and the first of four who are not involved in the charges against him but are being allowed to testify to show a propensity for such acts by Weinstein.

Judge Lisa B. Lench told jurors before the woman’s testimony that they would receive instructions later on how to consider it.

Weinstein, already serving a 23-year sentence for a New York conviction that is under appeal, has pleaded not guilty in Los Angeles to four counts of rape and seven other counts of sexual assault. He has repeatedly denied engaging in any non-consensual sex.

Ashley M. appeared rattled as she walked to the stand late in the day Thursday, and began crying before any questions were asked.

"I’m sorry," she said repeatedly to Judge Lisa Lench, who replied that she had nothing to be sorry for and called for a short break.

She gathered herself and began her testimony, saying she had been a professional ballet dancer who had just shifted to dancing in Hollywood.

She said that Weinstein appeared on the set while they were filming in a ballroom, and asked her to step outside.

Ashley M. said Weinstein talked about her giving him a naked massage, and she tried to assuage him by saying she was engaged, and that she was needed on the set.

She said Weinstein told her he was the boss and got to decide who needed to be on set.

The woman called her mother and her then-fiance, who told her to seek help from others on the set.

Then someone said it was time for a meal break.

"I thought, ‘whew, saved by the bell,’" she testified.

During the break, she asked the films choreographer and a producer what to do, but got the sense that they didn’t want to upset Weinstein.

"Did either of them give you any sort of help?" Deputy District Attorney Marlene Martinez asked.

"How did you feel then?" Martinez asked.

"Freaked out," the witness answered.

Ashley M. said when the returned to the set Weinstein was waiting there with a limo, and Hung.

"I felt better just knowing I wasn’t alone," she said.

The Associated Press does not typically name people who say they have been sexually abused unless they have come forward publicly.

Ashley M. told her story to the New York Times in October of 2017, when the newspaper’s accounts of women who say Weinstein sexually assaulted them put the movie executive at the center of the #MeToo movement.

Thursday was the first time she has told her story in a courtroom.

Ashley M. is expected to return to the witness stand for more questioning from prosecutors Friday, followed by cross-examination from Weinstein’s defense.