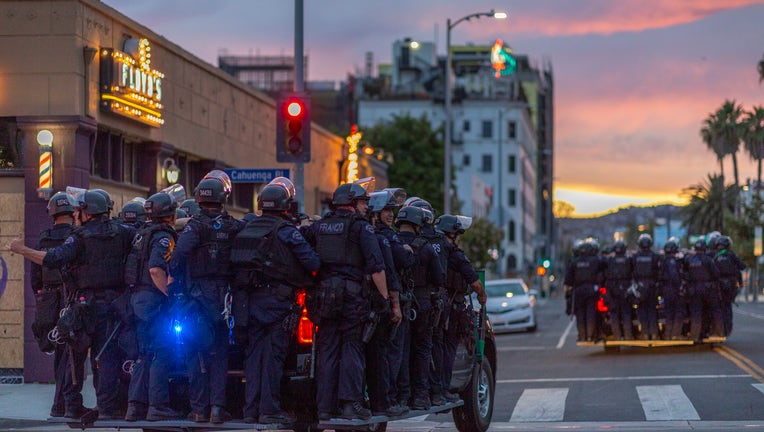 LOS ANGELES, CALIFORNIA - JUNE 01: Police move through the streets as large numbers of people are arrested after a curfew went into effect during demonstrations over the death of George Floyd on June 1, 2020 in the Hollywood section of Los Angeles, C (Getty Images)

LOS ANGELES - Cities and counties across Southern California are beginning to impose curfews again for Tuesday night in an attempt to curb civil unrest.

The city of Beverly Hills will be enforcing a curfew Tuesday beginning at 1 p.m. through 5:30 a.m. Wednesday morning. Police will be "actively patrolling" the city, officials say. The curfew prohibits people from being on streets, sidewalks, parks and any other public space.

Officials in Garden Grove will be enforcing a citywide curfew Tuesday and Wednesday nights. The curfew takes effect at 6 p.m. until 5 a.m. the following morning.

The city of Santa Monica announced that a curfew would be in effect Tuesday citywide beginning at 2 p.m. through 5:30 a.m. Wednesday morning. Additional details were listed online.

Officials in Torrance said they will enforce a curfew every day for as long as Los Angeles County is under a state of emergency. The daily curfew will take effect at 6 p.m. every day through 6 a.m. the next morning.

Additional cities are expected to announce curfews for Tuesday night. Check back with FOX 11 News for updates throughout the day.