Police confirmed that those taken hostage during services at Congregation Beth Israel synagogue in Colleyville have been rescued safe and alive.

COLLEYVILLE, Texas - Police confirmed that the four people taken hostage during services at Congregation Beth Israel synagogue in Colleyville have been rescued safe and alive. The suspect who took the hostages is dead.

The news of the rescue came more than 10 hours after authorities were called to the scene Saturday.

Colleyville police arrived on scene just before 10:45 a.m. for a SWAT operation in the 6100 block of Pleasant Run Road and evacuated those in the area. They established a perimeter around Congregation Beth Israel synagogue.

The FBI was on scene assisting police with the situation, along with the Texas Department of Public Safety, North Tarrant Regional SWAT Team, and other local agencies.

There were four hostages taken inside the synagogue. The synagogue’s rabbi was believed to be among the hostages, a law enforcement official told the Associated Press.

Police said a male hostage was released uninjured just after 5 p.m. He did not require medical attention and was reunited with his family.

Negotiations continued for the other hostages, as 60-70 members of the elite FBI hostage rescue team flew down from Quantico, Virginia.

Just after 9 p.m., the FBI rescue team entered the synagogue and rescued the three other hostages.

It's unclear if the suspect was armed. Police and the FBI would not say if weapons were found on the suspect.

The synagogue’s morning services were being livestreamed on Facebook when the reported hostage situation took place.

There was audio of what sounded like a male suspect speaking, but the feed was taken down just before 2 p.m.

Authorities are still investigating the motive for the attack. An FBI official said his demands were specifically focused on issue not connected to the Jewish community.

A law enforcement official told the Associated Press the hostage-taker was heard demanding the release of Aafia Siddiqui, a Pakistani neuroscientist suspected of having ties to al-Qaeda, who was convicted of trying to kill U.S. military officers while in custody in Afghanistan. Siddiqui is in federal prison in Texas.

RELATED: Who is Aafia Siddiqui? Closer look at the Pakistani woman jailed in Texas

In a statement, CAIR-Houston Board Chair John Floyd, long-time legal counsel for Siddiqui's brother, said that his client is not the person responsible for the incident, and the suspect "has nothing to do with Dr. Aafia, her family, or the global campaign to get justice for Dr. Aafia."

"We strongly condemn the hostage-taking at Congregation Beth Israel in Colleyville, Texas. This antisemitic attack against a house of worship is unacceptable. We stand in solidarity with the Jewish community, and we pray that law enforcement authorities are able to swiftly free the hostages and bring them to safety," Floyd said in the statement. "We want the assailant to know that his actions are wicked and directly undermine those of us who are seeking justice for Dr. Aafia. On behalf of the family and Dr. Aafia, we call on you to immediately release the hostages and turn yourself in."

Some of Jewish faith gathered a half-mile down the road from the where the hostages were being held Saturday evening.

"When my people struggle, I struggle," DiCaprio Scott said.

Members of Islamic Central Southlake gathered to show their support for the synagogue.

People were hoping for a safe ending.

One Jewish organization, the Secure Community Network, said it notified the FBI early on.

"SCN is a national organization that works to protect Jewish institutions all across North America, and it was our duty desk that picked up the early context of what was happening at this particular shul and worked to alert the national authorities as to what was happening," said Harold Gernsbacher, with Secure Community Network.

The group monitors the web and dark web for potential attacks against Jewish establishments.

"It’s hard to describe that we use Jewish institutions as leverage against issues that occur around the world and the entire Jewish community of the world knows about this issue, knows about what has happened here today," said Harold Gernsbacher, with Secure Community Network, which is network that utilizes online intelligence to try to prevent attacks on Jewish institutions. "I’ve spoken to a number of people in Israel and a number of people across the United States, and we are standing here with the families of these people and hoping and praying for their safety." 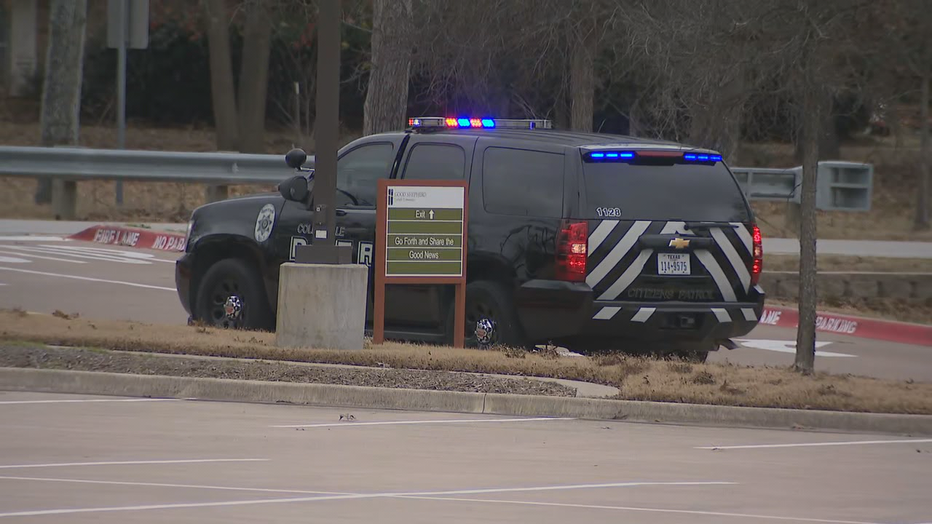 Dallas Mayor Eric Johnson said police will have extra patrols at Dallas synagogues and other sites as a precaution. Fort Worth PD also said they will have additional patrols at synagogues.

White House Press Secretary Jen Psaki tweeted that President Joe Biden has been briefed on the hostage situation. "He will continue to receive updates from his senior team as the situation develops.  Senior members of the national security team are also in touch with federal law enforcement leadership," she added.