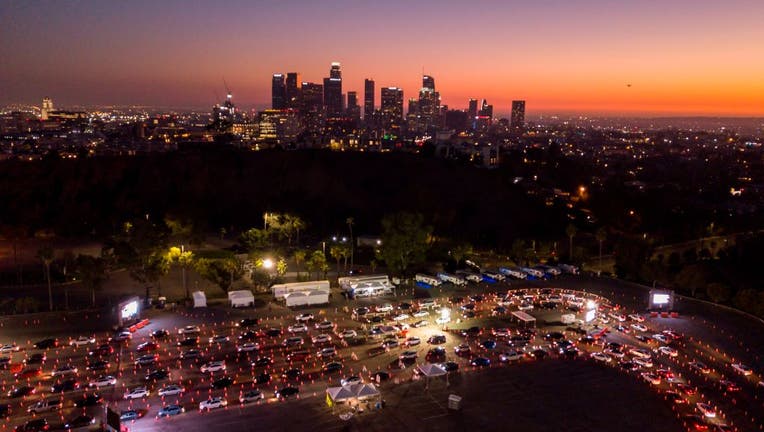 TOPSHOT - This aerial view shows cars lined up at the Dodger Stadium parking lot for Covid-19 testing with the downtown Los Angeles skyline in the distance, in Los Angeles, California, on November 14, 2020. (Photo by Robyn Beck / AFP via Getty Images

SACRAMENTO, Calif. - California saw its slowest growth rate on record for the nation’s most populous state, adding just 21,200 people during the year that ended in July, state officials said Wednesday.

For the second straight year, more people left California than moved to the state, resulting in a net migration loss of 135,600 people. People left the state in similar numbers as they did last year. but far fewer people moved to California, especially from April to June, when the state was under a stay-at-home order because of the pandemic.

California also had more deaths, which state officials said is most likely due to the pandemic. From 2017 to 2020, California would average about 4,800 additional deaths each year. But this year, California’s deaths grew by 12,800 to a total of 280,100.

The state reported a total of 6,163 coronavirus deaths on July 1, a number that has since grown to 21,481 as of Tuesday.

Still, when subtracting deaths from births, California added 156,600 people to its population naturally. Overall, the state’s population grew 0.05%, down from 0.23% the prior year. Its total population now stands at 39.78 million people.

The latest estimate came from the California Department of Finance and covers the change in population from July 1, 2019, to July 1, 2020.

Matt Frinzi, 68, moved from San Francisco to Reno, Nevada, on Tuesday. He had lived in California for 25 years but said he was tired of paying high income taxes and frustrated with the deterioration of his neighborhood. Nevada doesn’t have a state income tax.

“I loved San Francisco when I moved here in 1996. I thought it was the premiere city in the United States. I wouldn’t give you a nickel for it now,” he said. “I think there is a quiet rebellion growing.”