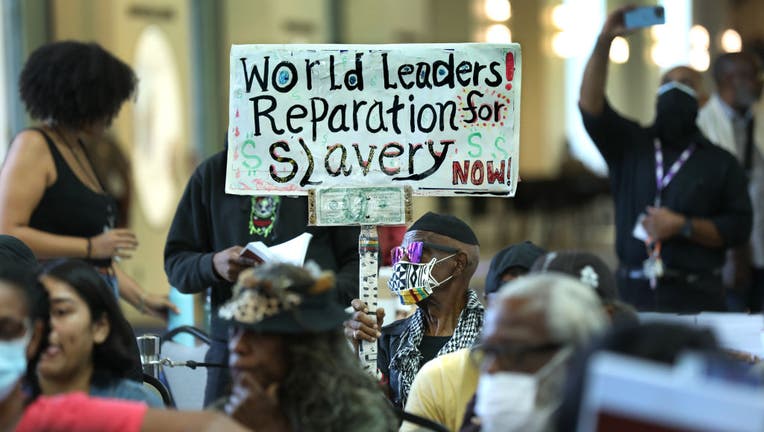 OAKLAND, Calif. - California’s committee to study reparations for African Americans will meet in Oakland Wednesday to discuss what form reparations could take and eligibility requirements to receive possible payments.

The first-in-the-nation task force previously voted to limit reparations to Black California residents whose ancestors were living in the United States in the 19th century. This week, the group will talk about whether there could be additional eligibility requirements and what time frame reparations could hinge on.

The group will also discuss how the state may address its impact on Black families whose property was seized through eminent domain, a topic that garnered renewed attention after lawmakers last year voted to allow the return of a beachfront property known as Bruce’s Beach to descendants of Black residents from whom it was taken in the 20th century.

Kamilah Moore, the task force’s chair, doesn’t expect the group to come to any final decisions at this week’s two-day meeting.

"We’re still in the exploratory phase," she said.

The task force has a July 1 deadline to complete its final report for the Legislature listing recommendations for how the state can address its legacy of discriminatory policies against Black Californians. The group’s work contrasts from similar efforts that have stalled in Congress.

Lawmakers in other parts of the country have pushed their states and cities to study reparations without much progress. But Evanston, Illinois became the first U.S. city last year to make reparations available for Black residents, and public officials in New York will try anew to create a reparations commission in the state.

Officials from Oakland, Sacramento, Los Angeles and other California cities will talk about local reparations efforts during a panel Wednesday.

That will include Khansa T. Jones-Muhammad, vice-chair of Los Angeles’ Reparations Advisory Commission, who said the commission — created last year under then-Mayor Eric Garcetti — doesn’t have a date set in stone to complete its work.

The goal of the commission is to advise the city on a pilot program for distributing reparations to a group of Black residents.

"A lot of our first year has really just been laying the groundwork to have a strong commission," she said.

In September, economists started listing preliminary estimates for what could be owed by the state as a result of discriminatory policies. But they said they need more data to come up with more complete figures.

Moore said the task force has not decided on any dollar amounts or what form reparations could take, but the public’s interest in those estimates shows optimism about the group’s work. The group hasn’t discussed where money for reparations could potentially come from.

About 30 people gathered Saturday at a Black-owned coffee shop in Sacramento for a reparations information session led by the Coalition for a Just and Equitable California, said Chris Lodgson, an organizer for the group.

The coalition is focused on advocating for reparations for Black residents. It has been supportive of reparations largely targeted at the descendants of enslaved African Americans.

"Generally speaking, Black folks can support other Black folks in the things that they want and need even if not everybody is benefitting equally from it or directly from it," Lodgson said.

California Secretary of State Shirley Weber, a former assemblywoman, authored the bill that created the state’s task force, and the group began its work last year. The bill was signed into law in September 2020 after a summer of nationwide protests against racism and police brutality following the killing of George Floyd, a Black man, by a white police officer in Minnesota.

In June, the task force released a 500-page report describing discriminatory policies that drove housing segregation, criminal justice disparities and other realities that harmed Black Californians in the decades since the abolition of slavery.