LOS ANGELES - California is the state with the second-highest amount of confirmed cases of the coronavirus variant that was first identified in the United Kingdom, according to the Centers for Disease Control and Prevention.

The CDC released data on Thursday breaking down where U.S. cases caused by recent variants have been found. 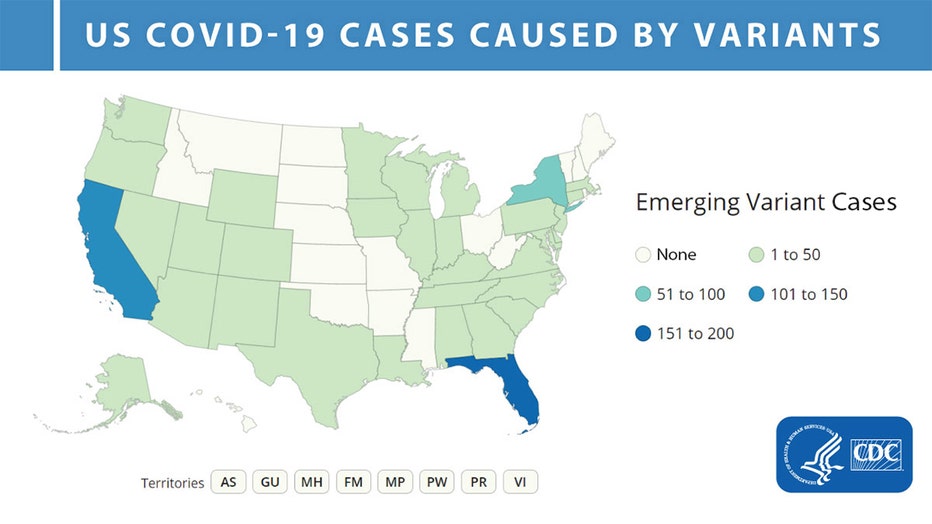 FOX 11 reached out to the California Department of Public Health, which said they have identified 151 cases of the B.1.1.7 variant in California, spread across five counties. The five counties include San Diego, Alameda, Los Angeles, San Bernardino, and San Mateo.

Earlier this week, the Los Angeles County Department of Public Health told the public that they confirmed the county's third case of the U.K. variant. The county's chief science officer, Dr. Paul Simon, said Friday that the county had not identified additonal cases of the COVID-19 variant.

FOX 11 has asked the state's health department for a breakdown of where each case was detected and is waiting to hear back.

According to the CDC, viruses regularly change through mutation. Scientists are monitoring how the virus that causes COVID-19 is changing and where variants that may spread more easily are found.

While the B.1.1.7 strain of the virus is considered more contagious, health experts say it's not necessarily more deadly than the original strain of COVID-19.

The B.1.1.7 variant was first discovered in September of 2020 and is now widespread in London and Southeast England. This variant emerged with a large number of mutations and has since been detected in numerous countries around the world, according to the CDC.

The CDC is also monitoring the U.S. for confirmed cases of two other COVID-19 variants, B.1.351, which was first discovered in South Africa and P.1, which was first was identified in four travelers from Brazil. Both variants were first detected in the U.S. at the end of January 2021.

As of this writing, the CDC has confirmed three cases of the South African variant and two cases of the Brazil variant in the U.S. No cases of either of those variants have been detected in California.

The CDC noted that the cases of variants they have identified are based on a sampling of SARS-CoV-2-positive specimens and do not represent the total number of variants circulating in the U.S. They also said their numbers might not match the numbers reported by states and local officials.