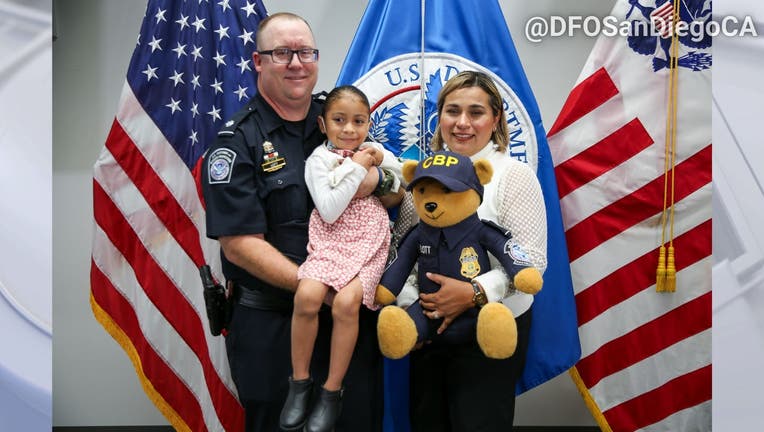 An officer is reunited with the baby he helped deliver.

SAN DIEGO (KTTV) - The U.S. Customs and Border Protection (CBP) shared heartwarming photos on social media of one of its officers being reunited with the baby girl he helped deliver.

Back in December of 2016, the officer, identified by the CBP as "J. Lott," responded to a call of a female traveler inside a car going into labor near the San Ysidro Port of Entry. Thanks to his previous training as an Emergency Medical Technician (EMT), Lott was able to remain calm and help bring baby Alexa into the world.

"I just trusted my training. I knew if I remained calm, the mother, the father, and everyone around me would stay calm," Lott recalled of the delivery efforts in a press release. "Although deep down inside I did not want to fail them."

After Lott and Alexa's mom helped deliver the baby girl, they were not completely out of the woods just yet. The baby appeared blue and was not breathing, according to CBP.

"I quickly administered chest compressions, and after about five or six, she started crying. I was already on my knees, and I just buckled. I remember saying to myself, just keep on breathing baby, just keep on breathing, please," Lott recalled of the live-saving efforts that ended up being successful in a press release.

Fast-forward to October 2022, Lott and his wife got a chance to meet Alexa, who is now five years old.

"This is truly an outstanding demonstration of the humanitarian side of our job. An officer’s ability to maintain a level of composure, and act quickly to perform emergency medical action saved a life," said Anne Maricich, CBP Acting Director of Field Operations in San Diego in a press release. "Officer J. Lott demonstrates not only to the community, but to fellow employees, that CBP is a world class law enforcement agency. I appreciate our continued partnership with our friends at the U.S. Consulate in Tijuana, as this reunion would not have happened without their support."

Alexa was also joined by her mom, dad, sister and brother in the heartwarming reunion, CBP said.

"I believe God put an angel in our hands that day, that angel saved my wife and baby’s life," Alexa's dad said in CBP's press release.