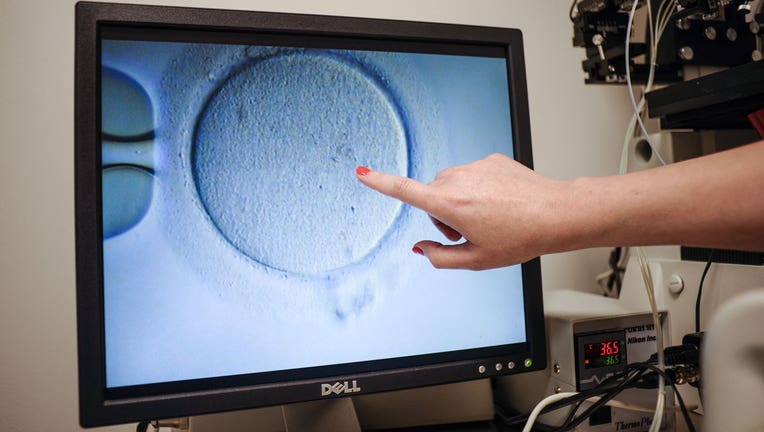 LIVERMORE, Calif. - Two lawsuits were filed Wednesday by families who have discovered that their fertility doctors secretly used their own sperm to inseminate the mothers of now-adult children.

In one case, a Livermore woman said that she wanted her sperm donor to be Christian and share her husband's ethnicity. She was horrified when she found out her daughter's biological father turned out to be her Jewish doctor.

The battery and fraud lawsuit against Dr. Michael Kiken, who most recently practiced in Lynchburg, Virginia, was filed in U.S. District Court in California. Another similar suit was filed against a La Jolla, Calif. doctor. Efforts to reach Kiken were not successful. Someone who answered the phone this week at the medical center where Kiken is listed as being employed said he doesn't work there.

Each suit, filed by San Francisco-based Adam Wolf, seeks unspecified monetary damages and for the doctors to reveal their personal medical history to the affected families.

In a virtual news conference, Wolf said the United States is “on the brink of uncovering thousands of fertility fraud cases,” mostly due to the result of the popularity of home DNA test kits like Ancestry.com and 23 and Me, based in Silicon Valley.

Wolf said he hopes the simultaneous lawsuits against the doctors will lead to federal and state anti-fertility fraud legislation. So far, Pew Trusts' Stateline noted that only three states have specific laws against the use of a practitioner’s own sperm to impregnate patients: California, Indiana and Texas.

One of the alleged victims, Katherine Richardson Richards, who lives in Livermore and who was one of Kiken's patients when he practiced in Alamo, Calif. said he violated her trust and essentially conducted "medical rape."

According to her suit, she had consented to be artificially inseminated with an anonymous sperm donor, who would resemble her husband in looks and ethnicity, which was Norwegian, Irish and English. The sperm donor would also share the couple's Christian faith, the suit states.

But her demands were not fulfilled, the suit alleges. Kiken, who used his own sperm to impregnate her, is Jewish. The suit states that Kiken was "much was much shorter than Plaintiff’s husband, slender, with brown eyes, and an olive complexion."

Richards said she was tricked.

"He secretly used his own sperm," Richards said of what happened in 1978. "Now I have to know that he violated me and that my children, who I love dearly, are the result of his disgusting conduct."

Catherine Richards of Livermore is suing a doctor in a fertility fraud lawsuit.

Her daughter, Julie Druyor of Dallas, who was conceived as a result, said she is “hurt, disgusted and confused.”

Druyor learned of the alleged deception and her father’s true identity after receiving a home DNA test kit as a gift. The test revealed she’s half Jewish. A genealogist helped trace the dots back to Kiken. She also learned she has a half-brother and she is a carrier for Tay Sachs, a rare disorder, which increases in people with Ashkenazi Jewish ancestors.

“I’m a product of my mother’s abuser,” Druyor said. “I don’t know if I’ll ever come to terms with that.”

Wolf, the attorney, said it is legal to make specific requests, even of someone's faith, in a sperm donor.

"People frequently ask for sperm donors that match themselves or their partners," Wolf said in an email to KTVU. "That can include things like height, education, and faith. This is very common. The more relevant part here is that the doctors explicitly agreed to provide sperm from a donor that met certain characteristics. And then they lied about this, and instead inserted their own sperm into their patients."

A similar situation occurred to Susan Simon in Oakland, who is not part of this lawsuit.

She, too, learned her biological father was her mother's fertility doctor and that she had 35 half-siblings around the globe after doing a DNA test a few years ago.

When she found out, she said she was shocked at first. And then a little numb. She wondered if she should be mad.

And then she realized that she wasn't an only child anymore. She had brothers, sisters, cousins, aunts, uncles and a whole bunch of relatives to meet.

Eventually, her feelings changed to gratitude.

"I got excited," she said. "What a gift at this stage in life to suddenly find a new family."