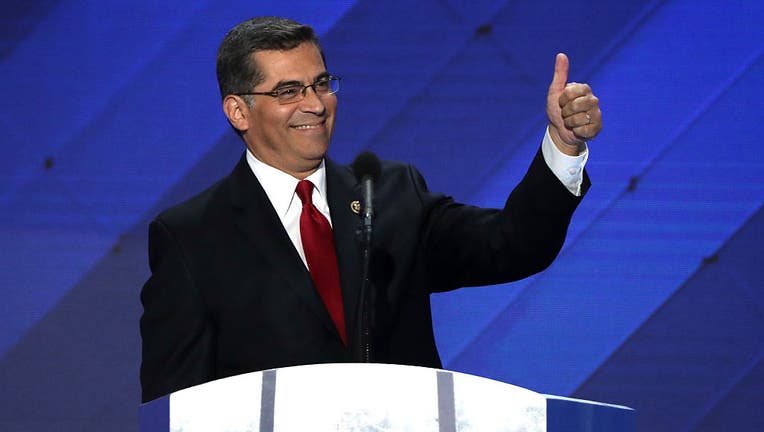 PHILADELPHIA, PA - JULY 28: U.S. Representative Xavier Becerra (D-CA) gestures to the crowd as he delivers remarks on the fourth day of the Democratic National Convention at the Wells Fargo Center, July 28, 2016 in Philadelphia, Pennsylvania. Democra

SACRAMENTO, Calif. - California Attorney General Xavier Becerra sued the Trump administration nine times on Tuesday, a fitting send-off from a state known for its frequent feuds with the president over the environment and health care.

Altogether, Becerra —- who is President-elect Joe Biden’s nominee to lead the U.S. Department of Health and Human Services —- has taken the Trump administration to court 122 times in four years, his office said.

The latest actions were part of an attempt to block a flurry of environmental rule changes in recent weeks, including moves Becerra said would weaken protections for migratory birds, exempt some clothes washers and dryers from energy efficiency standards, loosen regulation of greenhouse gas emissions from the oil and gas industry, and relax rules on toxic air pollutants.

"We have held the Trump Administration accountable time and again for their failure to follow the rules or respect our nation's environmental laws," Becerra said.

Becerra took office in California four days after Trump moved into the White House in 2017. Becerra filled a vacancy after Kamala Harris was elected to the U.S. Senate and before she was elected vice president.

California quickly developed a reputation as a center of resistance against the Republican administration, much like Texas had been during the years when Democrat Barack Obama was in office.

But Becerra far outpaced his counterpart in Texas, who sued the Obama administration at least 48 times, according to an analysis by the Texas Tribune.

More than half of Becerra's lawsuits were about public lands, natural resources and the environment. But he perhaps got the most attention in his role defending the federal Affordable Care Act after the Trump administration declined to defend the Obama-era law from a lawsuit brought by Republican-led states.

That case featured prominently in U.S. Supreme Court Justice Amy Coney Barrett's confirmation hearings, as it was one of the first cases she heard after getting confirmed by the Republican-led U.S. Senate.

While Becerra has been eager to challenge Trump, the president seems to have hardly noticed him. Trump has had plenty of things to say about California but focused his Twitter insults on Gov. Gavin Newsom and House Speaker Nancy Pelosi. According to an exhaustive catalogue of Trump's Twitter insults published by the New York Times on Tuesday, Becerra is never mentioned.

The Biden administration will likely try to undo many of the environmental rule changes Trump approved in his final days in office, a bureaucratic process that could take months. Becerra's lawsuits could help speed up matters by enticing a federal judge to block the rules from ever taking effect.

"It will take time to unwind the havoc the Trump Administration has wrought. That’s why the nine lawsuits we filed today are so important," Becerra said in a news release.