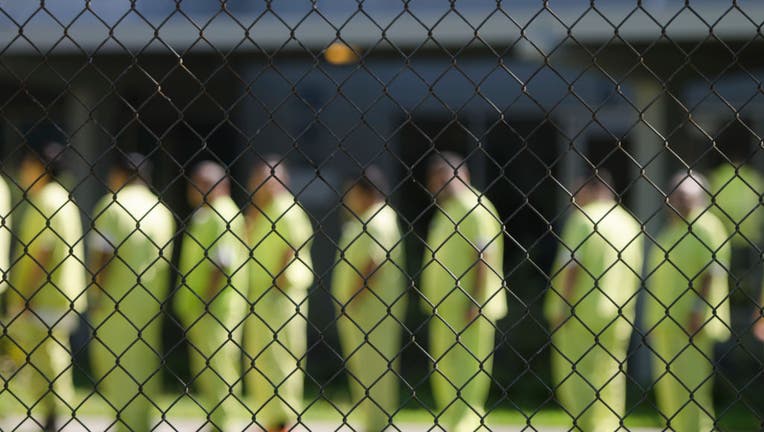 Detainees walk through the an outdoor yard at the Theo Lacy Facility in Orange, California, on Tuesday, March 14, 2017. (Photo by Jeff Gritchen/Digital First Media/Orange County Register via Getty Images)

The new law will allow inmates to be freed if they are permanently medically incapacitated or have a serious and advanced illness "with an end-of-life trajectory," the standard used by the federal prison system.

"It reduces incarceration costs, but more importantly, ensures there is a more humane and effective relief process for all people in California’s state prisons," said Claudia Gonzalez of Root & Rebound, one of the reform groups that sought the measure.

It will ease the current standard, which critics say is so restrictive that it keeps inmates locked up who are too sick to be dangerous. That not only fills prison beds unnecessarily, they say, but is costly because the inmates often require the most expensive and intensive care.

The new threshold will allow inmates to be freed if they are permanently medically incapacitated, or have a serious and advanced illness "with an end-of-life trajectory," the standard used by the federal prison system.

It will also create a presumption that a qualified inmate should be released, unless a judge finds an unreasonable risk to public safety.

By contrast, current law requires inmates to be terminally ill or permanently medically incapacitated, with strict definitions. The illness currently must be expected to be fatal within 12 months. And permanent incapacity is defined as meaning that an inmate requires medical care around the clock.

The bill will remove the 24-hour-care requirement, instead making inmates eligible if they cannot complete activities of daily living. It will also allow them to be freed if they have progressive dementia or another cognitive impairment.

California also currently requires a recommendation from the corrections department's secretary, the highest ranking prison official, who rejected 25% of all applications, according to FAMM's data. The bill will instead require lower-level employees to recommend an inmate be released if they meet the new threshold.

"California’s current policy is too narrow, and the process is lengthy and redundant, unnecessarily saddling the state with high medical costs," Democratic Assemblyman Phil Ting said after the Senate supported his bill. "We can do better."

The National Conference of State Legislatures said in a 2018 review that nearly every state has a process for releasing inmates with serious medical conditions, but they are rarely used. The Vera Institute of Justice, a national nonprofit research and advocacy group, separately cited limited eligibility and barriers to applying for release.