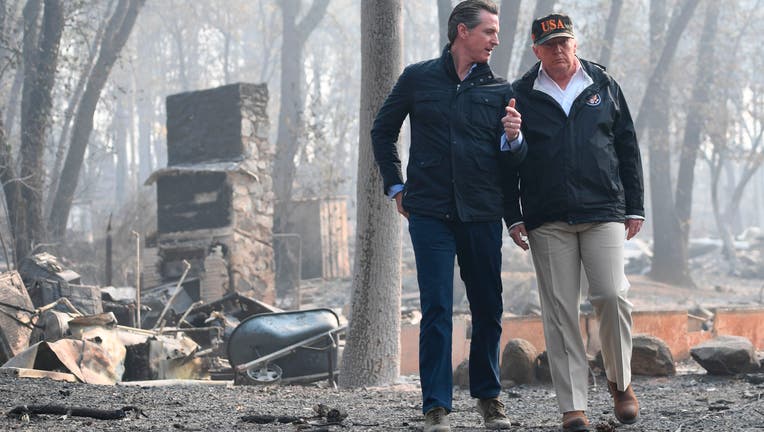 SACRAMENTO, Calif. (AP) - These times were strange enough. And then California Gov. Gavin Newsom and President Donald Trump started getting along.

The liberal Democrat — the leader in the headquarters of the Resistance — has taken to singing Trump’s praises, and he even used the Republican president’s campaign slogan Thursday: “Promise made, promise kept,” he said, thanking Trump for sending California testing swabs. He previously called Trump “thoughtful,” “responsive” and “collaborative.”

It’s a odd twist for a relationship that had largely been defined by long-distance combat. But it may prove to be savvy politics as Newsom works to get California’s nearly 40 million residents what they need from a president with a history of responding to flattery. Even a state as economically and politically powerful as California — a “nation-state,” at Newsom calls it — needs help from the federal government.

“Gavin has obviously separated his political preferences from trying to get as much help for California from the federal government in a really terrible situation,” said Bill Carrick, a longtime Democratic strategist.

But the detente comes less than seven months before the November presidential election, when Democrats are clamoring to take back the White House. And it comes at the expense of presumptive Democratic nominee Joe Biden, said Tim Groeling, a professor of communication at the University of California, Los Angeles, who has written a book on partisan divides and alliances.

“The person who is hit most by this isn’t Newsom, isn’t the other governors — it’s Biden,” Groeling said. “It’s extremely persuasive, it’s extremely credible that (Newsom’s) saying these things about Trump. It’s damaging to the Biden campaign’s attempt to set out a contrary narrative.”

Trump’s reelection campaign has already featured Newsom in an ad: “He said everything that I could’ve hoped for,” Newsom says in the short clip from an early March news conference, speaking about their collaboration in dealing with a cruise ship housing infected passengers that docked in California.

Newsom hasn’t blindly followed the White House. He has put the state’s economic and political heft to work by purchasing massive amounts of personal protective gear as the federal government ran out of supplies. He donated 500 of California’s ventilators to other states in need. He’s entered into a pact with other Western governors that spells out how they will reopen the economy, and he named a roughly 90-member task force on reopening the economy with members like former Federal Reserve chair Janet Yellen and Apple chief Tim Cook that looked like a more liberal version of Trump’s.

It’s all helped him win praise for his response. California hasn’t seen the surge in deaths that other states like New York have faced, and its rate of hospitalizations and infections is flattening.

Still, he’s expecting the Federal Emergency Management Agency to pay most of the state’s expenses back. When Trump signed a major disaster declaration for California in March, it ensured the state could get reimbursed up to 75% for most of its coronavirus expenses — including its contract for hundreds of millions of masks and the cost of renting hotel rooms for health care workers and homeless individuals.

“I don’t think anyone could ever accuse him of being a wilting flower in the face of Donald Trump,” said Brian Brokaw, a longtime political adviser to Newsom who is not involved in the day-to-day coronavirus response. “At the same time, he’s the governor of California, he’s not the governor of blue California. ... He’s not going to inject partisan politics into an emergency response.”

Cuomo and other Democratic governors like Kansas Gov. Laura Kelly sharply criticized the White House for putting most of the testing burden on states as they consider when to ease restrictions on business and movement.

Newsom sent a different message: He praised Trump for his “focus” and “appreciation” on the need for more testing. Now, 90,000 swabs are on their way to California.

When 2020 began, Newsom appeared prepared for another year of robust jousting with the administration. Last December, he tweeted out a cartoon video depicting himself in a go-kart race with Trump.

“Our country is looking to California, and we’ll continue leading the way. Resistance, with results,” Newsom says before he wins the go-kart race.

It was the type of video that sparked speculation about Newsom’s presidential ambitions — conjecture that has followed him since his days as San Francisco mayor. While he’s taking a different approach now, it could still help him in a White House run later, Groeling said, particularly among voters who reward bipartisan cooperation.

For his part, Newsom says politics are the last thing on his mind. He even punted last week when asked by a reporter if and when he planned to endorse Biden.

“You just reminded me of politics,” he demurred. “I certainly look forward to,” he added, before quickly moving on.