An employee with the California Employment Development Department who spoke to KTVU anonymously for fear of retaliation said these and thousands of other claims are happening because of lax management, little oversight and an inability to properly flag suspicious claims. Brooks Jarosz reports

SACRAMENTO, Calif. - An unemployment claim was processed for a 120-year-old man. Another one was made for an 8-year-old girl. And 80 more for a single address in San Francisco.

An employee with the California Employment Development Department who spoke to KTVU anonymously for fear of retaliation said these and thousands of other claims are happening because of lax management, little oversight and an inability to properly flag suspicious claims.

Despite efforts, even by some law enforcement agencies, to catch and weed out fraud, cases are mounting.

"It’s hard to stand idly by and watch so much chaos go through," the whistleblower said. "It’s really frustrating. Some of these really stick out."

In a single day of processing claims he found more than five addresses with dozens of claims going to each of them.

In the addresses listed in screenshots provided and reviewed by KTVU, there was a slew of phony phone numbers associated with numerous claims, or no numbers listed at all. 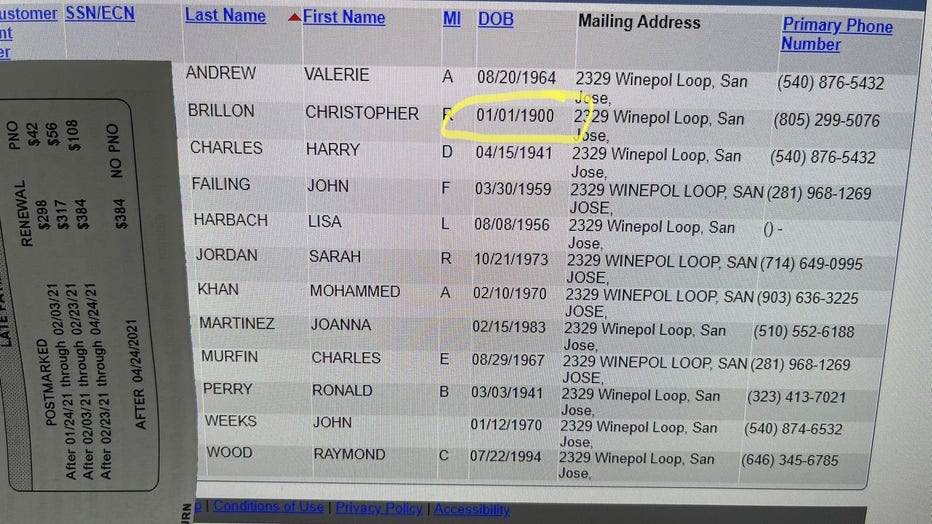 In visiting one apartment along Chicago Avenue, a dead-end street in San Francisco, a bucket sat on the front porch. It had a stack of EDD letters stuffed inside with some dating back to mid-November and others postmarked as recently as two weeks ago. No one answered the door.

Other locations involving dozens of claims include a rented apartment in San Jose and an abandoned store front in Richmond.

"These things are obvious and they’re not being caught," the whistleblower said.

The employee said he has gone to his supervisors over suspicious claims many times but fell on deaf ears. He said he also suggested workers share and document questionable findings in a spreadsheet, but that went nowhere.

"The emphasis was too much on just processing claims at all costs," he said. "These people need to be caught and they need to be prosecuted."

Nine California district attorneys announced arrests last month in collaborative investigations. That includes schemes involving groups of prisoners who have profited off the state’s pandemic assistance. Even death row inmates including Scott Peterson are said to have participated and received money.

Just last week, former EDD employee Andrea Gervais of Roseville was charged with mail fraud and accused of a scheme involving 100 fake unemployment assistance claims including one in the name of Sen. Diane Feinstein.

Despite repeated attempts for comments, EDD has failed to address any of KTVU’s questions or responses to this employee’s allegations.

Lawmakers asked for an independent investigation and got it. Right now, California State Auditor Elaine Howle is digging into EDD and its processes and is expected to release findings in January.

History shows fraud has long been a problem for the department, especially following wildfires, earthquakes and other disasters when people file for emergency unemployment assistance. The insider said it’s no surprise numerous questionable claims have been paid out.

"Anybody, anywhere should have seen this coming. It’s just a mess that should not have happened."

"Anybody, anywhere should have seen this coming," he said. "It’s just a mess that should not have happened."

A backlog of claims has plagued the department since the pandemic began. In recent weeks, there’s been a steady increase in new unemployment claims.

A new electronic verification process was supposed to speed up processing of legitimate claims, however, dozens of people who are waiting on their unemployment money tell KTVU it has been weeks or months with no progress or communication.

"We have one job, which is to help people out who are unemployed," the insider said. "And we’re failing at that mission."