California is considering shutting off water deliveries to thousands of farmers, primarily in Central California, due to extreme drought conditions and very low reservoir levels.

SACRAMENTO, Calif. - California regulators are planning to stop thousands of farmers from taking water out of the state's major rivers and streams because of a worsening drought.

The Sacramento Bee reported that the State Water Resources Control Board will vote on the "emergency curtailment" order Aug. 3. If approved, it would take effect about two weeks later. There would be exceptions for drinking water and other needs.

The order shows the effect the drought is having on California's water supply, said Eileen Sobeck, the board's executive director. Sobeck told the newspaper that there "is just not enough to meet all of the legitimate demands."

"We don’t take this action lightly; we know that it’s going to impose hardships on folks," she said. 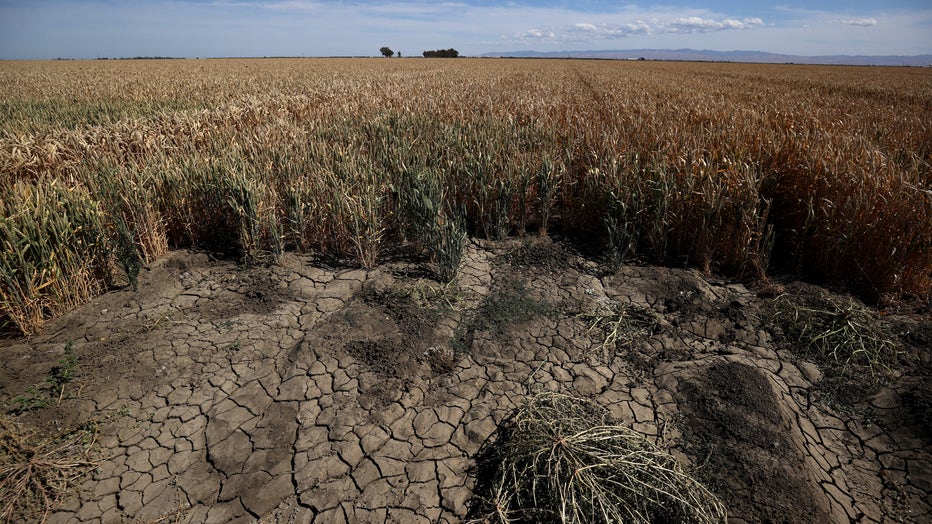 FIREBAUGH, CALIFORNIA - MAY 25: Dry cracked earth is visible next to a field on May 25, 2021 in Firebaugh, California. As California enters an extreme drought emergency, water is starting to become scarce in California's Central Valley, one of the mo

The western United States is in the midst of an historic drought that is emptying reservoirs and contributing to massive wildfires.

Extreme conditions like these are often from a combination of unusual random, short-term and natural weather patterns heightened by long-term, human-caused climate change. Scientists have long warned that the weather will get wilder as the world warms. Climate change has made the West much warmer and drier in the past 30 years. Special calculations are needed to determine how much global warming is to blame, if at all, for a single extreme weather event.

During the previous drought in the mid 2010s, state officials imposed restrictions on farmers, but stopped short of issuing a blanket order like this. 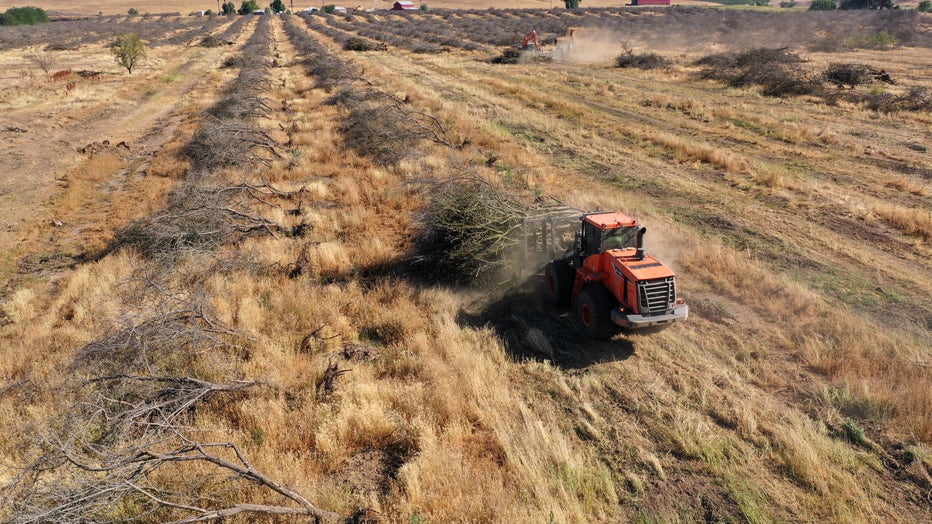 SNELLING, CALIFORNIA - MAY 27: In an aerial view, a worker with Fowler Brothers Farming uses a wheel loader to move a pile of almond trees during an orchard removal project on May 27, 2021 in Snelling, California. As the drought emergency takes hold

California Gov. Gavin Newsom has asked everyone to voluntarily cut their water use by 15%. He has issued an emergency drought proclamation that covers 50 of the state's 58 counties, or about 42% of the state's population. California's population centers — including Los Angeles, San Diego and San Francisco — are not included.

Farmers' water allocations this year have already been dramatically reduced. This new order will further weaken their ability to produce this year, said Karen Ross, secretary of of the state Department of Food and Agriculture. But she said the move is "absolutely necessary."