A long-duration lake-effect snowstorm is underway across western and northern New York, including the cities of Buffalo and Watertown, where some places will see more than 4 feet of snow pile up by the end of this weekend.

Bands of heavy snow off lakes Erie and Ontario have been producing snowfall rates up to 3 inches per hour since Thursday, vaulting storm totals more than 50 inches, and the event is far from over. Many vehicles attempting to drive around the Buffalo metro area were reported to get stuck on Friday because of impassable roads.

As of Saturday morning, 77 inches (nearly 6.5 feet) of snow has buried Orchard Park, New York, where the Buffalo Bills were originally scheduled to host the Cleveland Browns at Highmark Stadium on Sunday, but the game has been moved to Ford Field in Detroit because of the major snowstorm.

Dozens of abandoned cars can be found around the Buffalo area, as this 'historic' snowstorm continues. FOX Weather's Katie Byrne spoke live with LiveNOW from FOX's Josh Breslow.

New York Gov. Kathy Hochul declared a state of emergency for the Buffalo and Watertown areas because of the expected feet of snow. As of Thursday evening, all commercial traffic was banned along a 132-mile stretch of the New York State Thruway (Interstate 90) from Rochester, New York, to the Pennsylvania border.

Stella, a Golden Retriever, plays in the snow after an intense lake-effect snowstorm impacted the area on November 18, 2022 in Hamburg, New York. (Photo by John Normile/Getty Images)

At least two deaths were attributed to the storm by an Erie County, New York official. The official said two residents passed away after suffering cardiac issues while trying to remove the snow and cautioned that the snow is heavy and can be dangerous.

Medical experts say shoveling heavy snow can be detrimental to one's health. A study by the American Journal of Emergency Medicine found that more than 11,000 people seek medical attention for injuries associated with removing snow each year. 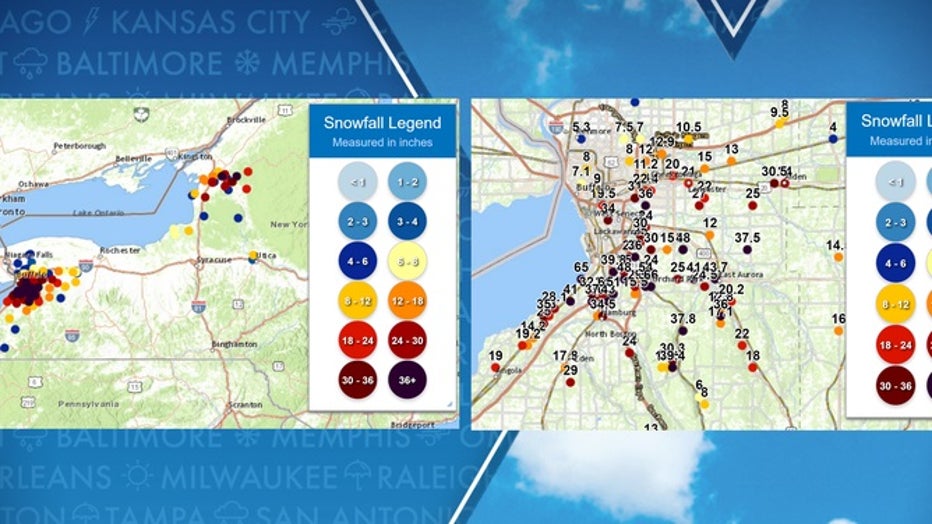 The National Weather Service office in Buffalo noted the weather pattern responsible for this lake-effect snow event shares similarities with the historic November 2014 lake-effect storm that was dubbed "Snowvember," when more than 5 feet of snow crippled the Buffalo Southtowns.

Lake-Effect Snow Warnings have been issued on the east and northeast sides of lakes Erie and Ontario, including the cities of Buffalo and Niagara Falls in western New York and Watertown in northern New York.

Snowfall rates in bands could each at least 3 inches per hour, which means additional snow amounts of 8 to 12 inches or more are expected across the Buffalo and Watertown metro areas.

WHY SNOWFALL RATE IS IMPORTANT TO UNDERSTANDING WINTER WEATHER 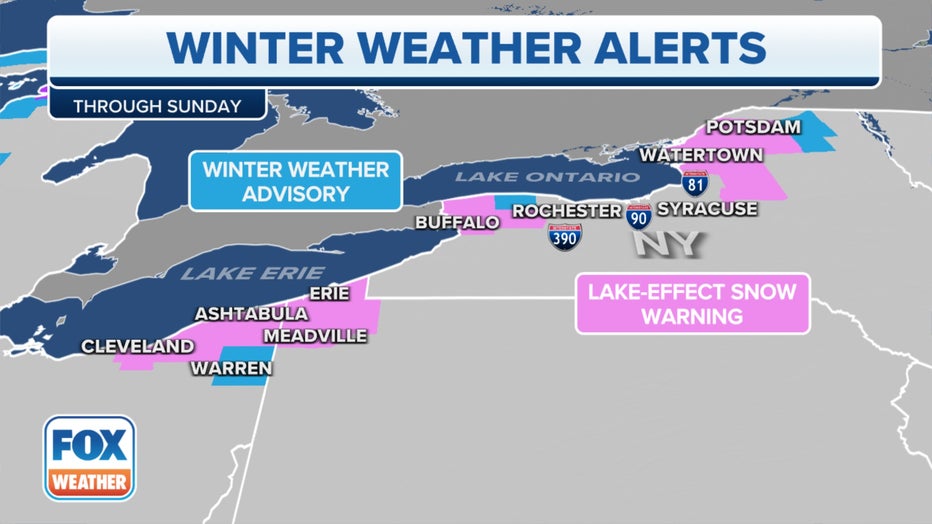 Lake-Effect Snow Warnings have been issued on the east and northeast sides of lakes Erie and Ontario. (FOX Weather)

"What's really a challenge here for the forecasters and residents alike is: Where is that narrow band going to set up?" FOX Weather Winter Storm Specialist Tom Niziol explained. "Both to the north and south of Buffalo, people could be going about their daily routines where little snow has fallen, but as that band drifts north and south, you go from clear conditions into a complete whiteout in a matter of minutes."

Thundersnow has even been observed in the heaviest snow bands along the lakefront.

Locals are making the most of a severe winter storm in western New York that's brought over 3 feet of snow with more on the way.

NEW YORKERS BRACE THEMSELVES FOR ‘LIFE-THREATENING’ SNOW EVENT THIS WEEKEND

Both lake-effect snow bands will then swing back southward and intensify on Saturday night, producing snowfall rates of 2 to 3 inches per hour once again. This means Buffalo and Watertown will see another round of heavy snow overnight, with additional accumulations of 5 to 9 inches by sunrise Sunday.

The bands will settle to the south of the Buffalo and Watertown metro areas during the day Sunday, bringing an end to the intense lake-effect snow for the most populated areas of the region, but an additional 6 to 12 inches of snowfall is predicted by Sunday evening for areas well south of both Buffalo and Watertown.

BROWNS VS. BILLS GAME MOVED FROM BUFFALO TO DETROIT DUE TO ‘POTENTIALLY HISTORIC’ SNOWSTORM

Snow showers will likely linger into Monday to the east of lakes Erie and Ontario with additional minor accumulations.

How much snow will fall by Sunday?

What is 'lake effect snow?' Weather expert breaks it down!

What is 'lake effect snow?' Dr. Elizabeth Thomas with University at Buffalo spoke with LiveNOW from FOX's Josh Breslow to explain.

The FOX Forecast Center said the highest snowfall totals will likely be centered over the Buffalo and Watertown metro areas because of the nearly stationary snow bands into Saturday morning.

Between 2 and 4 feet of total snow is expected to pile up in Buffalo by Sunday, fueled by snowfall rates of 3 inches or more per hour in the heaviest lake-effect bands. Intense localized bands of snow over the Buffalo Southtowns will likely drop more than 4 feet of snow.

"That band off of Lake (Erie) is very impressive – about 20 miles wide," Niziol said. "On either side of the band, you've got partly sunny skies right now, but within the band itself, tremendous snowfall rates." 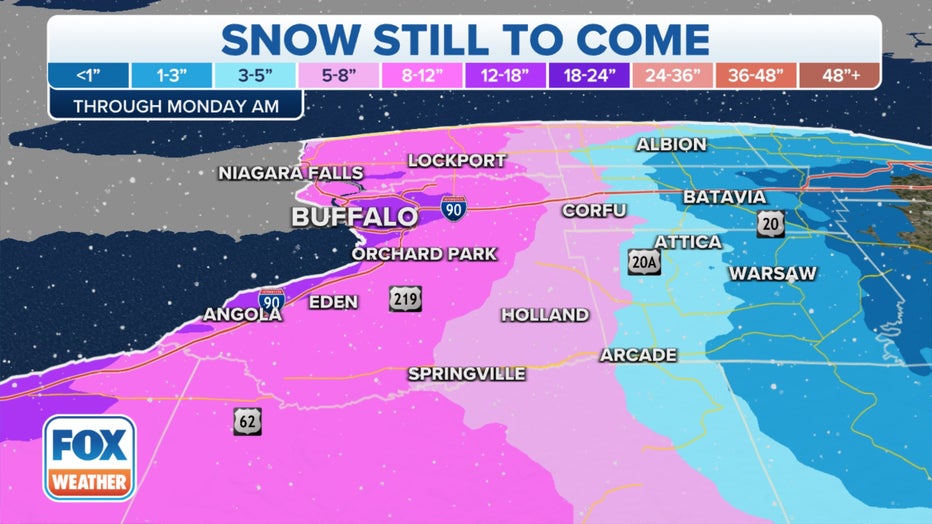 The snowstorm has prompted the Buffalo Bills to move Sunday's game against the Cleveland Browns to Ford Field in Detroit, marking the first time since 2014 that snow forced an NFL game to be moved to a different city, which also happened to be a Bills game.

As you can see in photos shared by the Bills on Twitter, multiple feet of snow buried Highmark Stadium on Friday.

A foot or more of total snow is also forecast in many other areas east and northeast of lakes Erie and Ontario that will see bursts of heavy snowfall through the weekend.

"Total snowfall that still is to come will be in feet rather than inches," Niziol said. "This is likely going to be a top-10 storm certainly in Buffalo's history, and maybe as much as a top-three storm for the month of November."

THE BEST WAYS TO SHOVEL SNOW AND STAY SAFE DOING IT 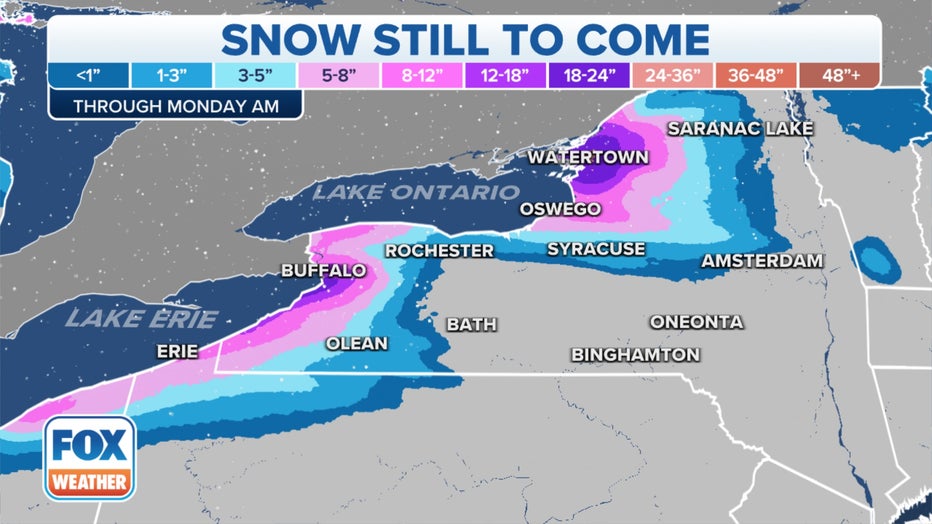 This potentially historic lake-effect snowstorm will rank on the highest possible scale of the Winter Storm Severity Index (WSSI) in the Buffalo metro area, which means extreme impacts are expected.

"Crippling" and "paralyzing" are just a couple of the adjectives the Buffalo NWS office has used in its forecast discussion to describe the severity of this ongoing storm. 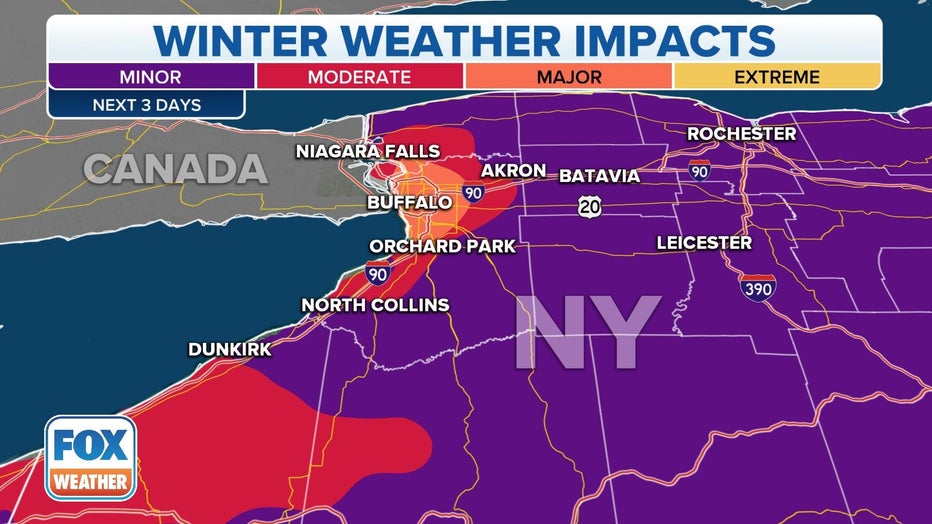 When looking at U.S. cities with a population of at least 50,000 residents, Buffalo ranks as the fourth snowiest in the nation. It averages 95.4 inches of snow each winter – just shy of 8 feet.

THESE ARE THE 7 SNOWIEST CITIES IN THE U.S.

Buffalo's heaviest three-day snowstorm on record dumped a whopping 56.1 inches of snow in 2001.

While that all-time record is expected to remain safe, this event will likely become one of the city's top-10-heaviest snowstorms as Niziol noted earlier. 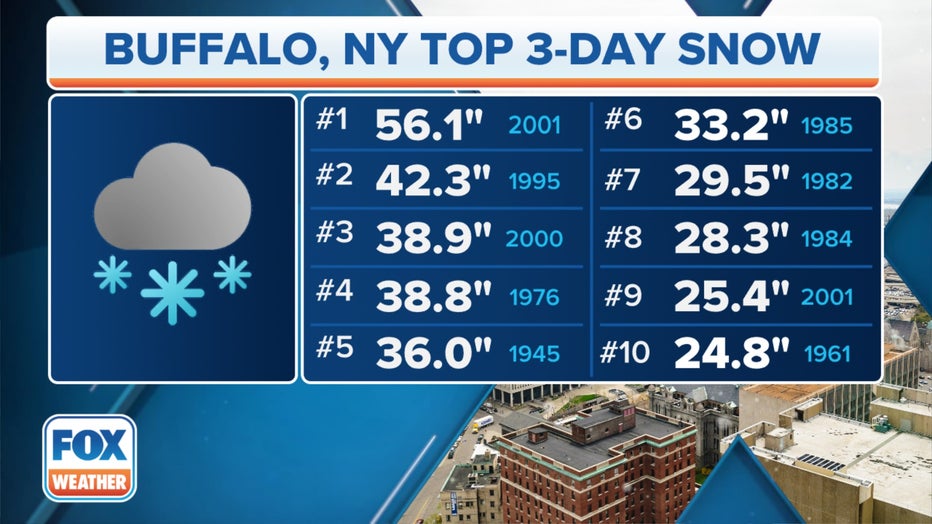 The 10 heaviest three-day snowstorms on record in Buffalo. (FOX Weather)

How does lake-effect snow form?

As that cold air passes over the lakes, warmth and moisture from the water are picked up and transferred into the lowest portion of the Earth’s atmosphere. This rising air condenses into clouds, which can grow into narrow bands that are capable of producing snowfall rates as high as 2 to 3 inches per hour or more, according to the NWS.

WHAT IS LAKE-EFFECT SNOW?

The temperatures of lakes Erie and Ontario currently range from the upper 40s to the lower 50s – much warmer than the temperatures in the 20s and 30s that are expected in western and northern New York during this lake-effect snowstorm.

This large temperature difference will create intense bands of snow off lakes Erie and Ontario through this weekend. 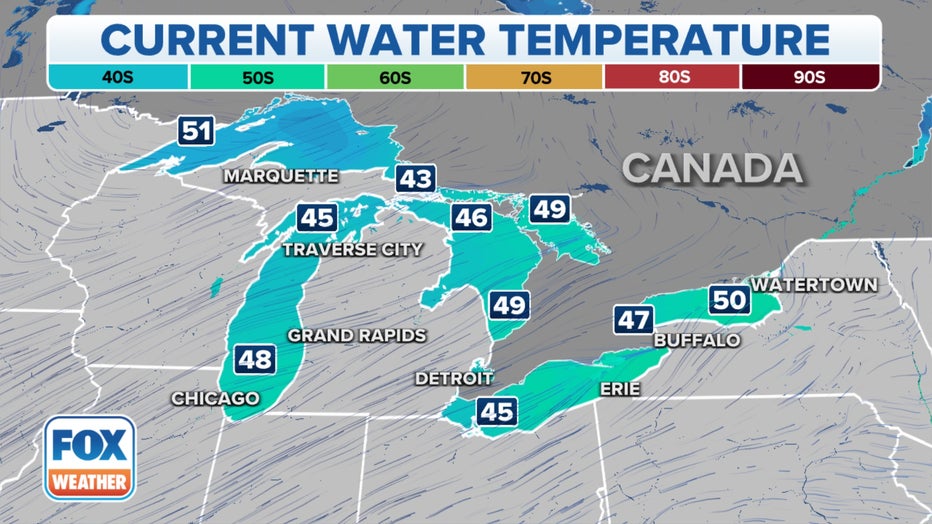