LOS ANGELES - Celebrities Brad Pitt and Flea from Red Hot Chili Peppers used their platform for good and contributed to a community food giveaway Friday to help feed Watts residents in need during the coronavirus pandemic.

"The community gives back to me…I like being a part of it, I like building bridges, I like making friends. When corona hit and I was sitting around and going to the beach and stuff, I did a lot of thinking about people who really might be struggling because they’re not getting enough to eat and not making money during COVID times,” Flea said.

Tanya Dorsey started Watts Community Core (WCC) as a free boxing program to show at-risk youth a different path. However, the program was put on hold due to the coronavirus crisis as Gov. Gavin Newsom issued an order that temporarily prevents many businesses from operating indoors, including fitness studios and gyms.

The founder of Watts Community Core Tanya Dorsey shares the story of how a boxing gym for at-risk youth transformed into a critical provider of essential goods for her community, with the help of A-List Hollywood talent. Big-name stars helped recently at their community food giveaway.

Tanya joined FOX 11 with Elex Michaelson and Dr. Drew on August 4 to talk about the WCC program and how Brad Pitt and Flea have been a big part of helping the community.

RELATED: Gov. Newsom calls for immediate re-closure of additional businesses in most of California

Instead, the program shifted its efforts and is now using the space as a place to feed the community, serving about 700 people on a weekly basis.

Celebrities Brad Pitt and Flea were amongst those who participated in a food giveaway in Watts.

“There’s more than one story. We’re having stress because of COVID, we’re scared, we don’t know what’s going to happen next and then for a blessing like this to go on it lets us know that there is a God and someone who cares and that’s the core,” Dorsey said.

Flea was introduced to the program through a mutual friend.

“I just love being a part of it, but honestly, I don’t even think about it as giving as much as I get given to. I get welcomed here…we’re all working together doing something beautiful” he added.

Also on Friday morning, A-lister Brad Pitt drove a delivery truck and donated food baskets to the cause. 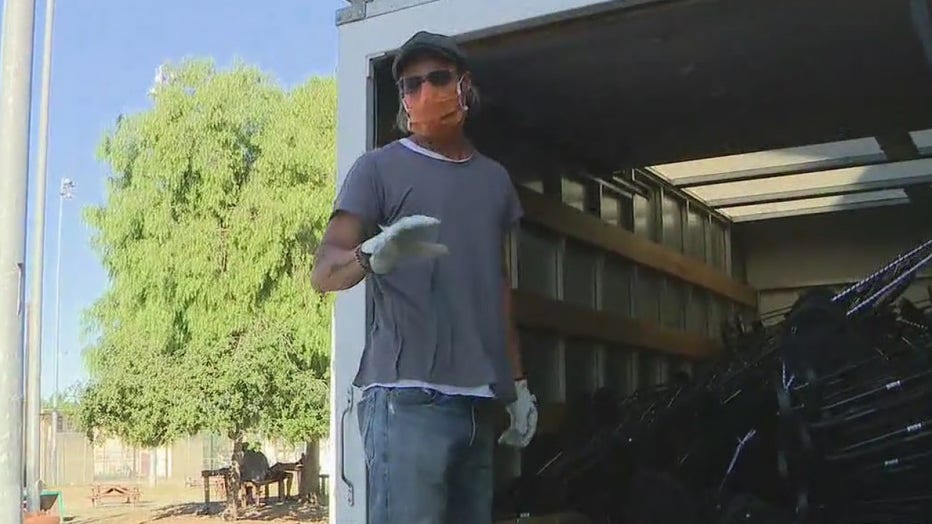 Pitt declined an interview but did wave to cameras as he unloaded the truck.

Residents said the giveaway is making a big difference during this difficult time.

The program is currently only able to feed about 700 people due to funding.