A grandmother from Missouri is working with her state representative to create a law that would seek financial restitution from DUI offenders whose actions resulted in the death of a parent or guardian.

NASHVILLE, Tenn. - A bill in Tennessee that aims to hold drunk drivers accountable by requiring DUI offenders to pay child support if their actions resulted in the death of a parent has passed unanimously in the state legislature.

House Bill 1834, also known as "Bentley’s Law," passed the Tennessee Senate on Wednesday and now goes to Gov. Bill Lee’s desk for an expected signature into law. Under the law, an impaired driver convicted of vehicular homicide will be ordered to pay restitution in the form of child maintenance to each of the victim’s children until they are 18 years old and graduate high school.

If the defendant is incarcerated and can’t pay, the defendant is given one year after their release to begin payments. If the child reaches 18 but hasn’t been paid in full, payments will continue until the child is entirely paid, the bill says.

The court determines an amount that is "reasonable and necessary for the maintenance of the victim's child," considering factors such as the surviving parent's financial needs and resources and the standard of living to which the child is accustomed, according to the bill.

Bentley’s Law was proposed by Cecilia Williams of Missouri after her 30-year-old son, his fiancé, and their 4-month-old were all killed in a DUI crash in 2021. The crash left their two other sons, Bentley, 5, and Mason, 3, orphaned, and Williams began pushing for the law in the belief that the man who caused the crash should be held financially responsible.

"I believe with all my heart that this is the one thing that’s going to help make people from being a second or third or fourth offender. Because it seems to be a huge problem everywhere," Williams told FOX Television Stations last year.

Every day, about 28 people in the U.S. die in drunk-driving crashes, which equates to one person every 52 minutes, according to the National Highway Traffic Safety Administration. 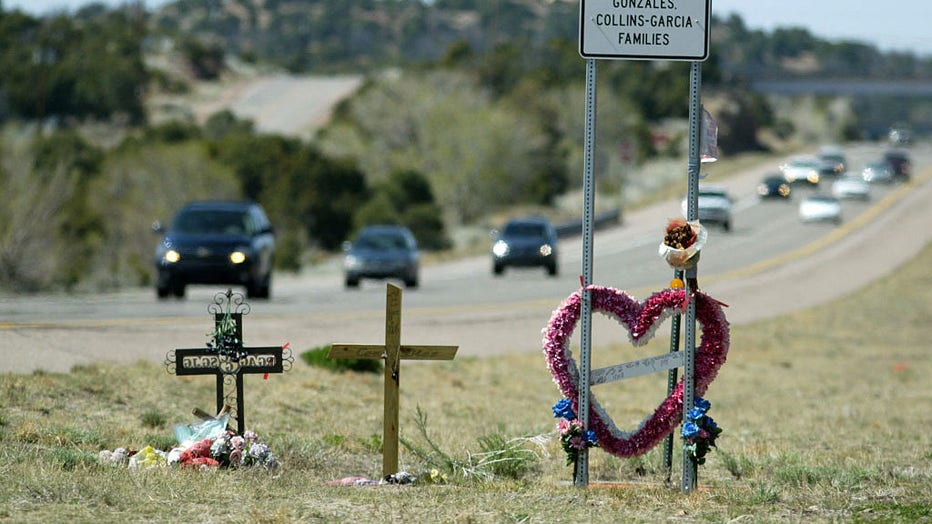 Traffic passes a memorial to a family killed by a drunken driver in a file image taken near Santa Fe, New Mexico. (Photo by Steven Clevenger/Corbis via Getty Images)

After the bill passed unanimously in both the House and the Senate, Williams said Wednesday that she "just broke down."

"For me, this is fantastic because if you know anything about the legislative process, it just doesn’t happen that quick," Cecilia Williams said Wednesday in a Facebook live video.

Nicholas Galinger, a 38-year-old rookie officer, was inspecting a manhole cover that had water flowing from it late one night in February 2019 when he was killed in a fatal hit-and-run. A woman was later convicted of vehicular homicide by intoxication in his death and sentenced to 11 years in prison.

Republican State Rep. Mark Hall, who sponsored the bill, pledged to "do everything in our power to hold people accountable who choose to do harm."

"As I promised, I will do what it takes to protect the future of our most valuable resources, our children," Hall said Wednesday. "I am proud of our leadership, in both the House and the Senate, to get this bill pushed forward to the point that it is heading to our Governor Bill Lee for his signature."