President Joe Biden gave his first address to the U.N. General Assembly and called on nations to move quickly to tackle the COVID-19 pandemic, climate change and other issues facing the world, on Sept. 21, 2021, in New York City.

NEW YORK - President Joe Biden appealed to the world’s nations during his first address before the U.N. General Assembly on Tuesday to move quickly to tackle the COVID-19 pandemic, climate change and other issues — while declaring that the U.S. is "not seeking a new Cold War" amid tensions with China.

The annual convening of world leaders is taking place in person this year in New York after being held virtually in 2020. In his address, Biden said the U.S. is entering a "new era of diplomacy." He called on world leaders to work together on the pandemic and to meet goals to address the climate change crisis.

"We meet this year in a moment intermingled with great pain and extraordinary possibility," Biden said in his remarks, noting the global COVID-19 death toll at more than 4.5 million people since the onset of the pandemic.

"Whether we choose to fight for our shared future or not will reverberate for generations to come," he continued.

The president, who arrived in New York on Monday evening to meet with U.N. Secretary-General Antonio Guterres ahead of the address, emphasized the body's relevance at a difficult moment in history.

"There’s a fundamental truth of the 21st century... Our own success is bound up in others succeeding as well," Biden said. "I believe we must work together as never before." 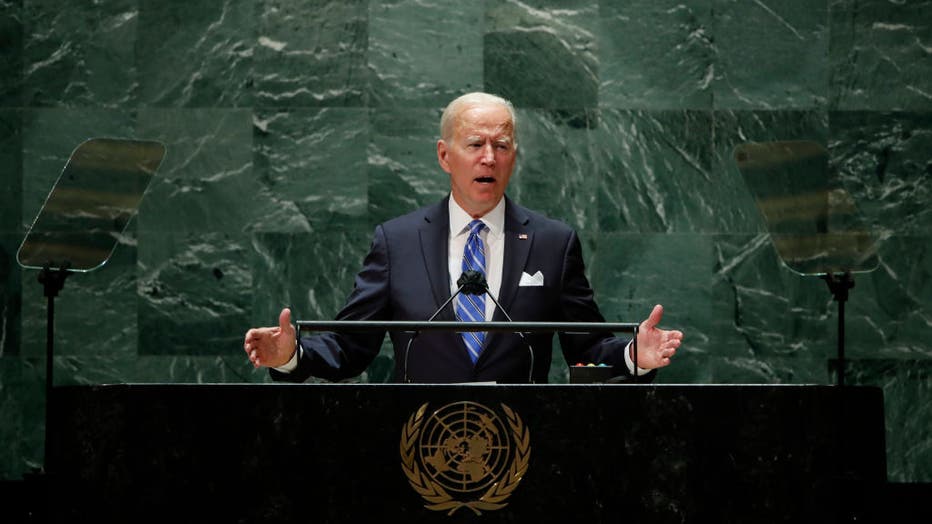 Biden has faced many difficult moments in the opening months of his presidency as it relates to U.S. allies, including a chaotic ending to the U.S. war in Afghanistan and differences over how to go about sharing COVID-19 vaccines with the developing world and certain pandemic travel restrictions.

There have been questions about the best way to respond to military and economic moves by China. Guterres told The Associated Press on Monday that he was concerned about the "completely dysfunctional" U.S.-China relationship and that it could lead to a new cold war.

"We are not seeking — say it again — we are not seeking a new Cold War," Biden said during his address, without mentioning China directly. He added that the U.S. would work with "any nation that steps up" and noted a duty among all countries to "carefully manage relations."

The president also noted his decision to end America's longest war last month, in Afghanistan, and set the table for his administration to shift U.S. attention to intensive diplomacy with no shortage of crises facing the globe. He said he is driven by a belief that "to deliver for our own people, we must also engage deeply with the rest of the world."

"We’ve ended 20 years of conflict in Afghanistan," Biden said. "And as we close this period of relentless war, we’re opening a new era of relentless diplomacy of using the power of our development aid to invest in new ways of lifting people up around the world."

Biden said that the U.S. is devoting its resources to challenges of the future, including managing shifts of global power dynamics, firming up trade rules, emerging technology issues, and the threat of terrorism "as it stands today."

But eight months into his presidency, Biden also finds himself in the midst of a fresh diplomatic spat with France, the United States' oldest ally, after announcing plans with Britain to equip Australia with nuclear-powered submarines. The move is expected to give Australia improved capabilities to patrol the Pacific amid growing concern about the Chinese military's increasingly aggressive tactics, but it upended a French defense contract worth at least $66 billion to sell diesel-powered submarines to Australia. 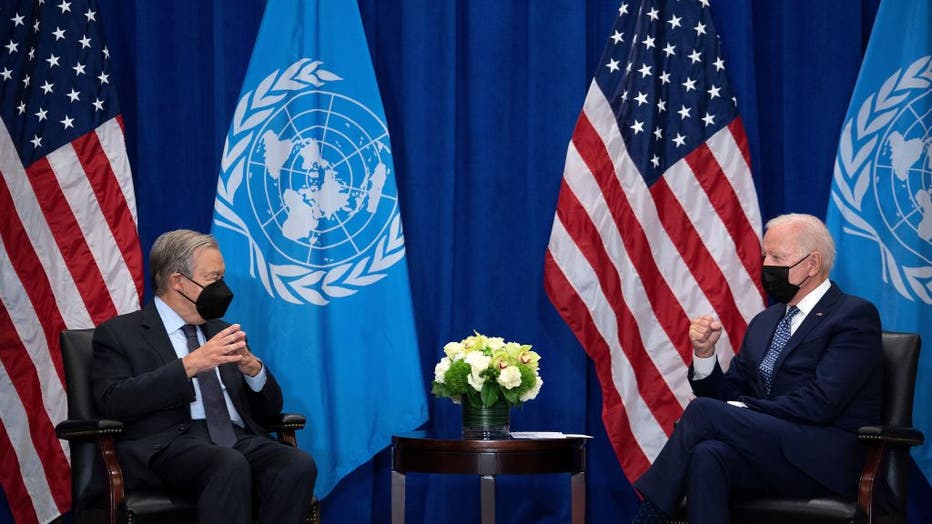 French Foreign Minister Jean-Yves Le Drian said Monday there was a "crisis of trust" with the U.S. as a result of the episode.

Before Biden’s arrival, EU Council President Charles Michel strongly criticized the Biden administration for leaving Europe "out of the game in the Indo-Pacific region" and ignoring the underlying elements of the trans-Atlantic alliance — transparency and loyalty — in the withdrawal from Afghanistan and the announcement of the U.S.-U.K.-Australia alliance.

The president hoped to use his address to the General Assembly as well as a series of one-on-one and larger meetings with world leaders this week to make the case for American leadership on the world stage.

Biden attends United Nations for the first time as president

President Joe Biden sat down with UN General António Guterres in New York after Guterres urged the U.S. and China to repair their relationship.

The Biden administration also announced plans on Monday to ease foreign travel restrictions to the U.S. beginning in November. The U.S. has largely restricted travel by non-U.S. citizens coming from Europe since the start of the pandemic, an issue that had become a point of contention in trans-Atlantic relations.

The new rules will allow foreigners in if they have proof of vaccination and a negative COVID-19 test, the White House said.

RELATED: US to require incoming foreign travelers to be vaccinated against COVID-19

Biden planned to limit his time at the United Nations due to virus concerns. He was to meet with Australian Prime Minister Scott Morrison while in New York before shifting the rest of the week's diplomacy to virtual and Washington settings.

At a virtual COVID-19 summit Biden is hosting Wednesday, leaders will be urged to step up vaccine-sharing commitments, address oxygen shortages around the globe and deal with other critical pandemic-related issues.

Earlier, Guterres opened Tuesday’s meeting by warning global leaders that the world has never been more threatened and divided — saying "we face the greatest cascade of crises in our lifetime." He pointed to inequalities sparked by the COVID-19 pandemic, climate alarm bells "ringing at fever pitch," upheavals from Afghanistan to Ethiopia and Yemen thwarting global peace, and a surge of mistrust and misinformation.

He also did not back off his concerns about the U.S.-China tensions, saying it will be "impossible to address dramatic economic and development challenges, while the world’s two largest economies are at odds with each other."

The secretary-general urged world leaders to bridge divides to promote peace, restore trust between the richer north and developing south on tackling global warming, reduce the gap between rich and poor and promote gender equality. He also called on member nations to ensure that the half of humanity that has no access to the Internet is connected by 2030.