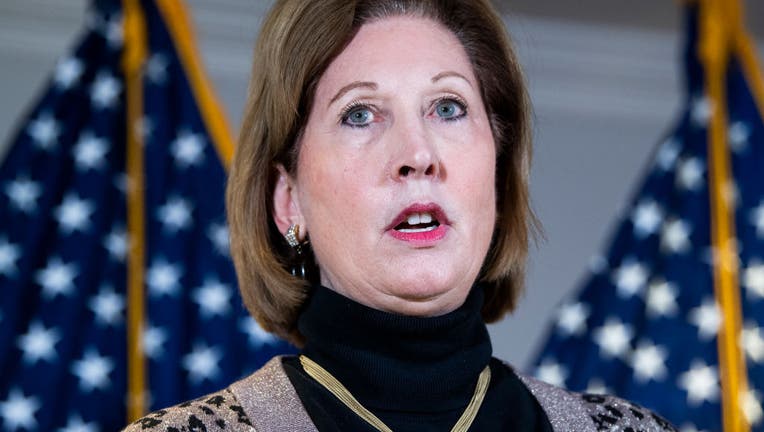 Sidney Powell conducts a news conference at the Republican National Committee on lawsuits regarding the outcome of the 2020 presidential election.

The lawsuit, which names Georgia Gov. Brian Kemp and Secretary of State and Chair of the Georgia State Election Board Brad Raffensperger among the defendants, alleges multiple Constitutional violations, citing fact witnesses, expert witnesses and statistical impossibilities within the election results, and says tens of thousands of votes were impacted -- enough to sway the state in favor of projected President-Elect Joe Biden.

“The scheme and artifice to defraud was for the purpose of illegally and fraudulently manipulating the vote count to make certain the election of Joe Biden as President of the United States,” the 104-page filing said.

The lawsuit argues there is no adequate remedy under the law and seeks to have the state’s results of both the 2020 presidential and congressional elections set aside. Biden beat President Trump by 12,670 votes, or 0.25%, according to results that were certified by the State of Georgia on Friday.

The lawsuit alleges election software and hardware produced by Dominion Voting Systems Corp., is where the “massive fraud begins,” stating the design and features of the system’s software do not allow for a simple audit of misallocation, redistribution and deletion of votes.

There is “incontrovertible physical evidence” that security systems were breached and that voting machines were connected to the internet, a violation of state and federal laws, according to the filing.

MORE: Georgia secretary of state says Trump ‘threw him under the bus’ in new op-ed

Georgia purchased Dominion voting machines and software in July 2019. At the time, state Democrats, led by former gubernatorial candidate Stacey Abrams, argued the machines were susceptible to tampering. The State of Texas a year earlier rejected the system due to its vulnerability to undetected manipulation.

A Dominion spokesperson earlier this week told Fox News that Powell’s claims are without merit.

Reported vulnerabilities in the Smartmatics system include barcodes that can override votes and machines with the capability of being connected to the internet without jurisdictions knowing, the lawsuit alleges.

Georgia Voting System Implementation Manager Gabriel Sterling continues to correct the record when it comes to claims about the 2020 election.

The State Election Board in April adopted an emergency rule that allowed for absentee ballots to begin being processed three weeks before the election with the superintendent authorized to open the outer envelope. The rule was in direct conflict with state law that says outer envelopes can be opened once the polls open on election day.

The lawsuit argues there is “no reconciling this conflict.”

Affidavits from Amanda Coleman and Maria Diedrich, Republican monitors of the state’s hand recount, said there was no way to tell if the recount was accurate or proper.

Another observer stated that at no time did they observe signature checks being conducted. Some counties are alleged to have not conducted the recount by hand and instead just reran the ballots through the same machines.

An affidavit from one observer witnessed hostility against Republican observers, but not Democrats, which the suit says is in violation of the Equal Protection Clause.

After the Georgia polls closed, election officials in Fulton County said a pipe burst at the vote tabulation center in the Allstate Arena that prevented 30,000 absentee ballots from being processed. The plaintiffs allege the water leak did not occur in the vote-counting room. Affiant Michelle Branton said election workers remained after being told to go home with people working the computers until 1:05 a.m.

ALLEGATIONS OF VIOLATIONS OF LAW

The plaintiffs allege the defendants violated the Elections Clause of the U.S. Constitution, which says that state legislature must set election rules. The defendants are not part of Georgia’s general assembly and have no legislative power.

Additionally, the lawsuit says Raffensperger and Georgia counties violated the 14th Amendment of the U.S. Constitution by denying equal protection under the law.

Poll watchers have the right to observe and monitor the electoral process to ensure it is conducted fairly. Absentee ballots were opened three weeks before Election Day, and there is “no reconciling this conflict,” the lawsuit says.

Some absentee and mail-in voters were given the opportunity to “cure” ballots with minor errors but not all, a denial of due process on the right to vote, according to the filing.

Also alleged is that absence of signature verification was a denial of the due process of the right to vote. The state’s signature rejection rate was 0.15% and just .00167% for absentee ballot applications across the state. Hancock County, which has a population of 8,348, rejected more ballots than Fulton County, which has the largest population in the state with more than 1.06 million people.

The State of Colorado, by comparison, had a rejection rate between 0.52% and 0.66%, according to the lawsuit.

The plaintiffs charge there was widespread ballot fraud and state that Georgia law allows for an election to be contested for reasons including misconduct, fraud or irregularity conducted by an election official or officials that place in doubt the result.

The acceptance of illegal votes, rejection of legal votes and an error in counting votes that would change the result are other reasons an election could be contested in the state.

Other requests of relief include not counting electors for Georgia in the 2020 election, or directing the state’s electors to vote for Trump.

For updates on this story, visit FOX News