LOS ANGELES - A winter storm warning was in effect Friday morning for Los Angeles County for a system that dropped several inches of rain in several parts of the Southland, sparked mudslides in Orange County's Silverado Canyon and was blamed for at least 50 rain-related accidents on area freeways.

On Friday morning, it was announced Los Angeles County beaches from Zuma to Marina Del Rey were closed due to the potential for lightning.

Los Angeles County beaches from Zuma to Marina Del Rey were closed due to the possibility of lightning strikes.

A Flood Advisory went into effect for most of Ventura County through 10:30 p.m. Friday, the National Weather Service said. Moderate to heavy downpours were expected in the area.

According to the National Weather Service, nearly 3 inches of rain fell in East Pasadena and about 2 inches in Culver City over the past three days. Bel Air, Woodland Hills and La Canada Flintridge each received more than 1.5 inches of rain and more than 1.25 inches fell in downtown Los Angeles, Beverly Hills, Burbank and Northridge over the same period.

FOX 11's crews were on scene when multiple mudslides broke out in Silverado Canyon.

One of the mudslides in Silverado Canyon was on the verge of swallowing up parts of a home in the area, FOX 11's Bill Melugin reports.

SNOW IN THE MOUNTAINS

A winter storm warning remains in effect for Southern California counties through 3 p.m. Friday, with up to feet of snow potentially accumulating at elevations above 6,000 feet.

Snowfall accumulated in the mountain communities, as well as along the Cajon Pass in the 15 Freeway.

A winter storm brought snow and heavy rain to Southern California. The Cajon Pass along the 15 Freeway was covered with snow on Friday morning.

An evacuation order was downgraded to an evacuation warning on Friday morning for Mountain Home Village, northeast Yucaipa and Oak Glen amid flooding and mudslide concerns.

As crews respond to mudslides in Silverado Canyon, FOX 11 has team coverage tracking the latest on the possible severe weather. 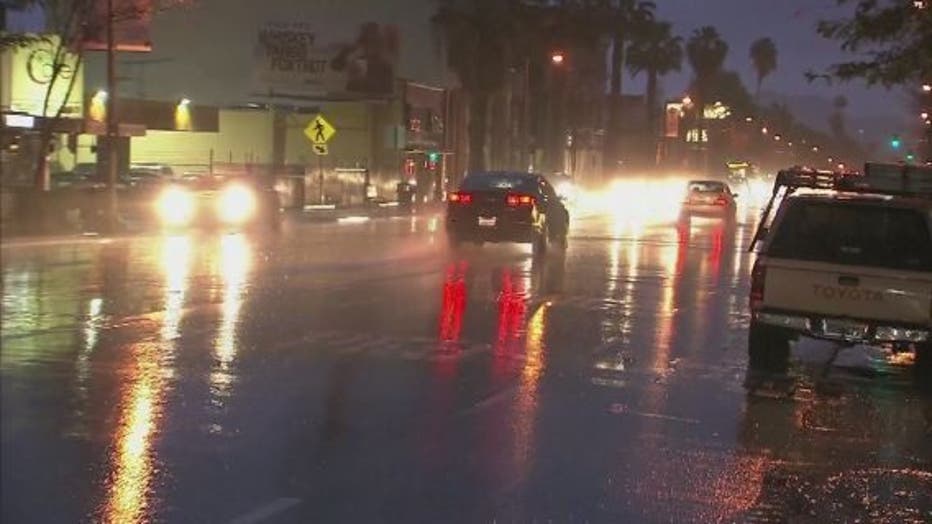 The Red Cross established a temporary evacuation point at 2 p.m. at El Modena High School, 3920 E. Spring St. in Orange, to offer resources to evacuees, such as snacks and information on available hotels and lodging. The evacuation point will not be operated as a shelter.

As of early Friday morning, officials did not say how many people were hurt in the mudslide.

Northern and Central California have been hit with a series of storms. Drivers were asked to avoid Highway 1 in San Luis Obispo and Monterey counties due to landslides.

FOX 11's Kelli Johnson and CNS contributed to this report.