A meeting was held to discuss the horrific sightings of hunting arrows landing on a Huntington Beach neighborhood.

HUNTINGTON BEACH, Calif. - Officials with the Huntington Beach Police Department are investigating after at least six arrows were discovered in residential areas in the Orange County city.

Authorities said over the past two weeks, the arrows have been found in areas west of Indianapolis Avenue and Brookhurst Street, located about three miles east of the Huntington Beach Pier.

They've been found in trees, sidewalks, backyards, on the streets, and eve on the roofs of a couple of homes.

Investigators are concerned someone could be struck by one of the falling arrows and are asking residents who see someone with a crossbow, compound bow, or another similar device to report them to the HBPD. Investigators are also asking neighbors to check their surveillance cameras for possible footage.

Residents in one Huntington Beach neighborhood are on edge after arrows have been found on homes and in the street. 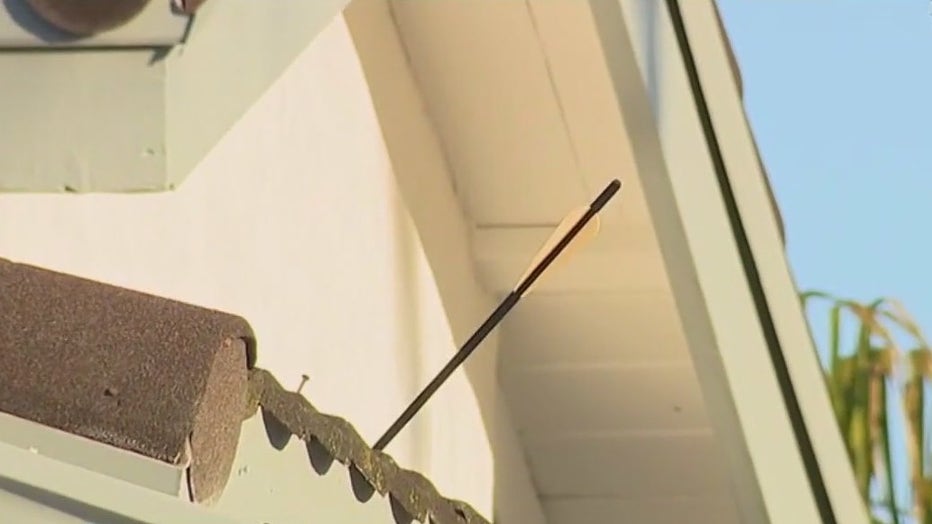 Hunting arrows have been found at Huntington Beach homes.

"These arrows are between 6 and 13 inches long with a metal tip. Some of the tips are rounded while others appear to be sharper. It’s either one person or a group of people together," said police spokeswoman Jessica Cuchilla.

"This is completely odd," said HBPD detective Read Parker. "I've never seen anything as super dangerous. It needs to stop… I mean, they could kill somebody."

HPBD said the most recent arrow sighting have been reported on Wednesday.

Neighbors are hoping to get to the bottom of this before people start to get hurt.

"When is this going to stop?" said Joe Sanders, a neighbor. "A lot of us hang out in our yards and there are kids. We're just tired of it."