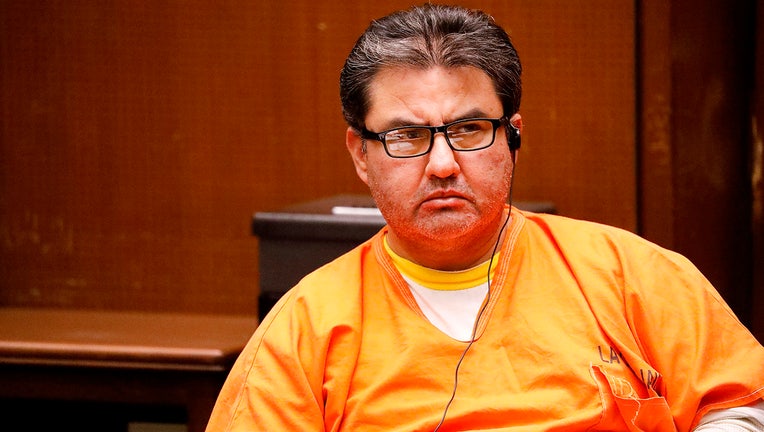 Naason Joaquin Garcia, the leader of a Mexico-based evangelical church with a worldwide membership of more than 1 million appeared for a bail review hearing in Los Angeles Superior Court on July 15, 2019. - He is charged with crimes including forcibl (AL SEIB/AFP via Getty Images)

LOS ANGELES - A state appeals court panel Tuesday ordered a Los Angeles Superior Court judge to dismiss the case against the leader of a Mexico-based megachurch, who was charged last year with rape and other sexual acts against children in Southern California.

The ruling by the panel from California's 2nd District Court of Appeal ordering Judge George G. Lomeli to dismiss the amended complaint against Naason Joaquin Garcia comes less than a year after the 50-year-old leader of La Luz del Mundo -- or The Light of the World -- was arrested last June by Los Angeles Airport police.

He was ordered to be held without bail last July, with a judge noting then that information provided by the alleged victims was "very detailed" and concluding that there is a "risk of flight" by Garcia, who was initially jailed in lieu of $25 million bail and then $50 million bail.

He was charged along with co-defendants Alondra Ocampo, 37; Susana Medina Oaxaca, 25; and Azalea Rangel Melendez, who is still being sought by authorities.

It was not immediately clear whether the appellate court's decision would affect the case against the three women.

Melendez was charged with one count each of forcible rape and forcible oral copulation.

The state Attorney General's Office alleged that the crimes occurred in Southern California between June 2015 and June 2019.

The criminal complaint alleged, among other acts, that Ocampo directed minors to perform "flirty" dances for Garcia "wearing as little clothing as possible." Ocampo also allegedly ordered various minors to "take off their clothing and touch each other sexually."

Ocampo also allegedly instructed three underage girls to take nude photos of themselves to send to Garcia, telling them to "take photos without their underwear and with their legs open," the complaint alleged.

State prosecutors alleged that Garcia and his co-defendants coerced the victims into performing sexual acts by warning them that defying "the Apostle" is akin to defying God.

Ashley Valdez, a representative of the evangelical church, vehemently denied the allegations against the man viewed by followers as an apostle of Jesus Christ.

"The church categorically rejects each and every allegation made against him," Valdez said previously.