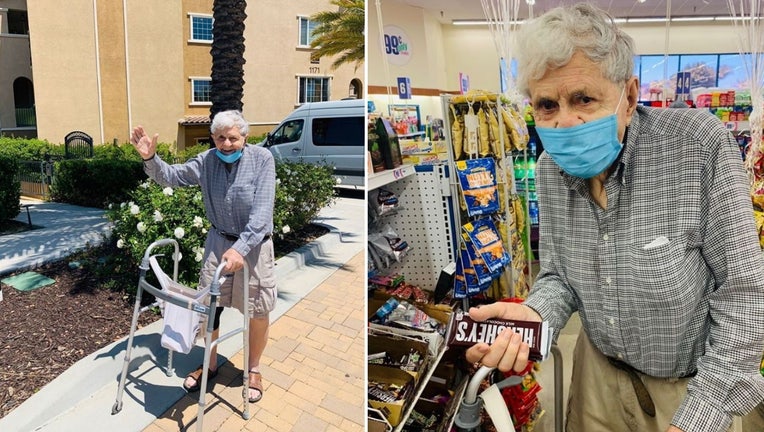 Mike, a retired Air Force veteran, told Farmer that he and his girlfriend Doris like to split a Hershey bar every night. (Rich Farmer)

A 93-year-old Air Force veteran in California was so intent on procuring Hershey bars for his girlfriend that he snuck away from their senior community and hitchhiked to the local 99-cent store.

The man, identified only as Mike, says he splits a Hershey bar with his girlfriend Doris every night, but he’s been having trouble getting to the store amid the coronavirus health crisis. On Tuesday, however, he tried his luck with hitchhiking, only for local resident Rich Farmer to stop and pick him up.

“I was going home for lunch at about 12:30 or 1:00 in the afternoon,” said Farmer, a real estate broker in Lake San Marcos, in an interview with Fox News. “When I turned a corner to go up the hill to my house, I saw an elderly gentleman about four feet into the street.”

Farmer said he couldn’t ignore Mike, who quickly stuck his thumb out as Farmer drove by. Farmer swung a U-turn and rolled down his window to ask if the elderly gentleman needed any help.

“He said he was trying to get to the 99-cent store,” Farmer told Fox News. 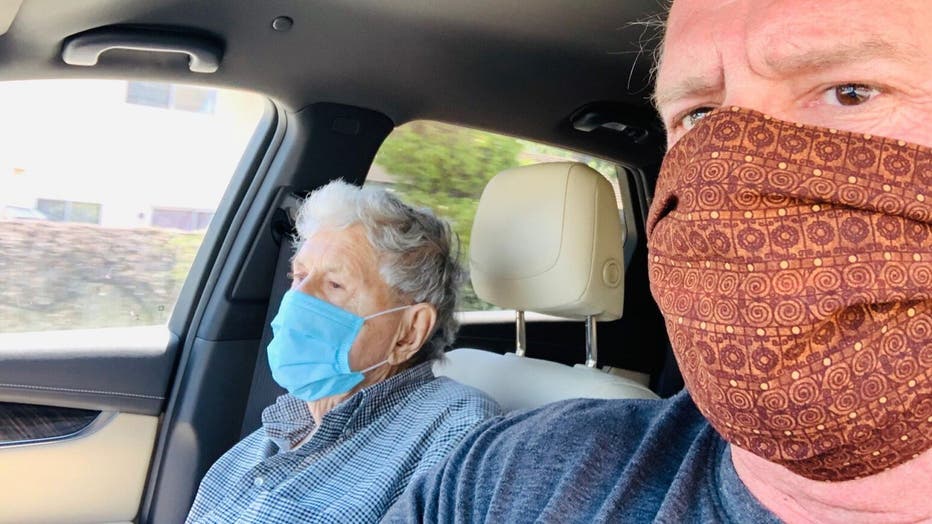 Rich Farmer said he picked up Mike, 93, after he saw the elderly gentleman hitchhiking in the road near a senior living community. (Rich Farmer)

Related: Navy officer of 31 years gets car parade after retirement ceremony canceled due to COVID-19

“I think my first concern was, ‘Wow, I don’t know if I should be picking up this 93-year-old man… But I got the car as clean as I could,” said Farmer, who added that he and Mike both donned personal protective equipment for the ride.

Farmer offered to take Mike wherever he wanted to go, including the neighborhood supermarket, but Mike had already made up his mind: He needed to get to the 99-cent store for Hershey bars.

“He said, ‘Well, we break one up every night and we share it, and I’m out. So I need to get to the 99-cent store to get some more Hershey bars,’” Farmer remembered.

Mike, a retired Air Force veteran, also told Farmer that he met his girlfriend Doris — or ‘Do,’ as he calls her — at a senior dance about 20 years ago. He added that Doris didn’t know he was doing this, and “probably hasn’t even started looking for me” yet.

Related: Blue Angels add Jacksonville and Miami to flyover schedule, but not Tampa

Once at their destination, Farmer helped Mike out of the car.

“He thanked me and waved goodbye, but I was like, ‘Wait a minute, buddy! We’re only halfway through with this trip!’” Farmer laughed. “'I’m not going to let you walk a mile-and-a-half back!'”

Once inside the store, Mike purchased 35 Hershey bars — and nothing else — for him and Doris to spit over the next 35 nights. Farmer then drove Mike home, where Mike once again thanked him for the ride.

Farmer also offered his card, and told Mike he’d be happy to drive him wherever he wants — an offer Mike took up on Monday, when the two went grocery shopping at a nearby Albertson’s. Mike later phoned to thank Farmer several times.

“I put him in my phone as ‘Hershey Bar Mike,’” Farmer said.

Related: Pentagon says anyone hospitalized for coronavirus 'disqualified' from joining military without waiver

But that’s not where the story ends: Farmer shared photos of his and Mike’s trip to the 99-cent store on Facebook last week, and the post has since been shared 28,000 times, generating nearly 70,000 reactions.

“I asked him if he knew what Facebook was [after the story went viral], and he said he had heard of it. And I asked him to guess how many people had seen my post. He said, ‘I dunno, like 20?’ At the time it was 60,000. He said, 'You gotta be kidding me!' He was happy that so many people enjoyed his story."

Now, Farmer tells Fox News that a couple of Hershey distributors have reached out to send Mike and Doris a couple of shipments, so they won’t have to worry about running low.

“I thought it was amazing that they have this tradition they do every night,” said Farmer, adding that he’s still happy to chauffer Mike around the neighborhood if need be. “But what a lovely story, that this guy is willing to hitchhike.”