Tens of thousands of people marched across the U.S. Saturday to protest the Supreme Court potentially striking down Roe v. Wade.

WASHINGTON - Abortion rights supporters demonstrating at hundreds of marches and rallies Saturday expressed their outrage that the Supreme Court will soon scrap the constitutional right to abortion that has endured for nearly a half-century and their fear about what that could mean for women’s reproductive choices.

Incensed after a leaked draft opinion suggested the court's conservative majority would overturn the landmark Roe v. Wade ruling, activists spoke of the need to mobilize quickly because Republican-led states are poised to enact tighter restrictions.

In the nation’s capital, thousands gathered in drizzly weather at the Washington Monument to listen to fiery speeches before marching to the Supreme Court, which is now surrounded by two layers of security fences.

The mood was one of anger and defiance, three days after the Senate failed to muster enough votes to codify Roe v. Wade.

"I can’t believe that at my age, I’m still having to protest over this," said Samantha Rivers, a 64-year-old federal government employee who is preparing for a state-by-state battle over abortion rights. 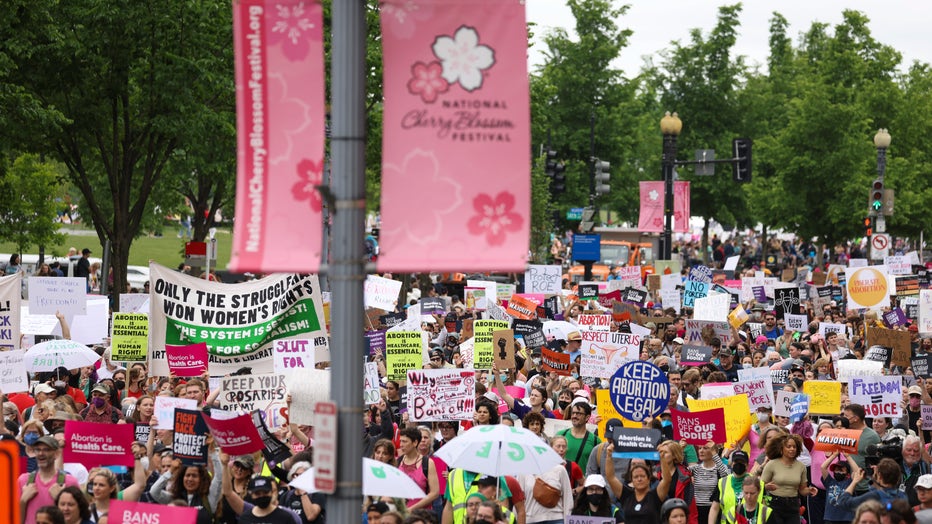 WASHINGTON, DC - MAY 14: Abortion rights activists participate in a Bans Off Our Bodies rally on May 14, 2022 in Washington, DC. Abortion rights supporters are holding rallies around the country urging lawmakers to affirm abortion rights into law aft

Caitlin Loehr, 34, of Washington, wore a black T-shirt with an image of the late Supreme Court Justice Ruth Bader Ginsburg’s "dissent" collar on it and a necklace that spelled out "vote."

"I think that women should have the right to choose what to do with their bodies and their lives. And I don’t think banning abortion will stop abortion. It just makes it unsafe and can cost a woman her life," Loehr said.

A half-dozen anti-abortion demonstrators sent out a countering message, with Jonathan Darnel shouting into a microphone, "Abortion is not health care, folks, because pregnancy is not an illness."

From Pittsburgh to Pasadena, California, and Nashville, Tennessee, to Lubbock, Texas, tens of thousands participated in events, where chants of "Bans off our bodies!" and "My body, my choice!" rang out. The gatherings were largely peaceful, but in some cities there were tense confrontations between people on opposing sides of the issue.

Polls show that most Americans want to preserve access to abortion — at least in the earlier stages of pregnancy — but the Supreme Court appeared to be poised to let the states have the final say. If that happens, roughly half of states, mostly in the South and Midwest, are expected to quickly ban abortion.

WASHINGTON, DC - MAY 14: Abortion rights activists participate in a Bans Off Our Bodies rally on May 14, 2022 in Washington, DC. (Photo by Tasos Katopodis/Getty Images)

The battle was personal for some protesters.

Teisha Kimmons, who traveled 80 miles to attend the Chicago rally, said she fears for women in states that are ready to ban abortion. She said she might not be alive today if she had not had a legal abortion when she was 15.

"I was already starting to self harm and I would have rather died than have a baby," said Kimmons, a massage therapist from Rockford, Illinois.

At that rally, speaker after speaker told the crowd that if abortion is banned that the rights of immigrants, minorities and others will also be "gutted," as Amy Eshleman, wife of Chicago Mayor Lori Lightfoot put it.

"This has never been just about abortion. It’s about control," Eshleman told the crowd of thousands. "My marriage is on the menu and we cannot and will not let that happen."

In New York, thousands of people gathered in Brooklyn’s courthouse plaza before a march across the Brooklyn Bridge to lower Manhattan where another rally was planned.

"We’re here for the women who can’t be here, and for the girls who are too young to know what is ahead for them," Angela Hamlet, 60, of Manhattan, said to the backdrop of booming music.

Robin Seidon, who traveled from Montclair, New Jersey, for the rally, said the nation was a place abortion rights supporters have long feared.

"They’ve been nibbling at the edges, and it was always a matter of time before they thought they had enough power on the Supreme court, which they have now," said Seidon, 65. 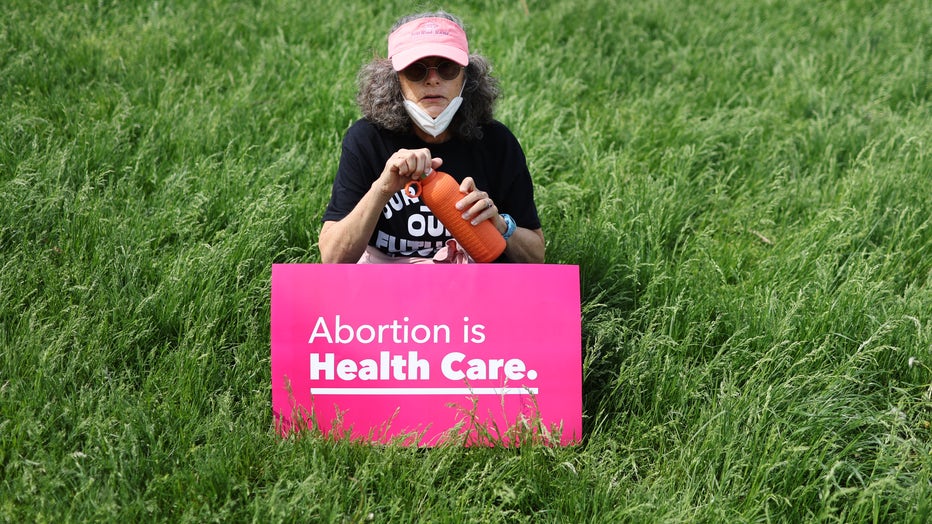 CHICAGO, ILLINOIS - MAY 14: Abortion rights demonstrators rally in Union Park before marching into downtown on May 14, 2022 in Chicago, Illinois. (Photo by Scott Olson/Getty Images)

The upcoming high court ruling in a case from Mississippi stands to energize voters, potentially shaping the upcoming midterm elections.

In Texas, which has a strict law banning many abortions, the challenger to one of the last anti-abortion Democrats in Congress marched in San Antonio.

Jessica Cisneros joined demonstrators just days before early voting begins in her primary runoff against U.S. Rep. Henry Cuellar. The race could be one of the first tests over whether the court leak will galvanize voters.

In Chicago, Kjirsten Nyquist, a nurse toting daughters ages 1 and 3, agreed about the need to vote. "As much as federal elections, voting in every small election matters just as much," she said.

At many of the rallies, speakers put the issue in stark terms, saying women and girls will die if abortions are outlawed.

In Los Angeles, high-profile lawyer Gloria Allred recounted how she could not get a legal abortion after being raped at gunpoint in the 1960s. She ended up having life-threatening bleeding after a "back alley" abortion.

"I want you to vote as though your lives depend on it, because they do," she told the crowd.